Health Minister Chris Picton told InDaily that the government had launched an advertising campaign to encourage South Australians – particularly those aged under 65 – to receive a free flu vaccination at a GP clinic or pharmacy.

The free vaccination scheme, announced at the end of May and to run until June 30, was prompted by concerns this year’s flu season would be more severe following two years of the COVID-19 pandemic and reduced natural immunity.

Latest data released on Monday shows 2645 South Australians have caught the flu so far this season, with 238 of those admitted to hospital.

However, data accurate as of last Friday shows only 36 per cent of eligible South Australians are vaccinated.

Prior to the launch of the free flu vaccination scheme, the SA branch of the Pharmacy Guild warned pharmacists would be run off their feet, saying they weren’t given reasonable notice by the government and had limited stock.

But Pharmacy Guild SA president Nick Panayiaris told InDaily that during the first two weeks of the scheme, demand had been “steady but not overwhelming”.

“We thought there might be a fairly significant rush, being obviously a free program, but overall, it’s actually been going quite smooth,” he said.

“We haven’t run out of stock as we thought we may have and demand has not been as high as predicted at this stage.”

Panayiaris said the “primary reason” for the slower-than-expected start was a lack of community awareness of the scheme, with some members of the public booking vaccination appointments without realising they were free.

He said apart from at the initial launch, there hadn’t been much government promotion to encourage people to get vaccinated.

“Some pharmacies have done their own marketing and awareness of the program and they’re probably getting a bit more through their own channels, such as social media and so forth,” he said.

“If they (the government) want to increase vaccination rates they clearly need to use some form of media… and increase the awareness basically in terms of the program itself.

“If that changes in the next couple of weeks then I would imagine we might see a surge in demand before the end of the month.

“I think it’s going to be really dependent on messaging from SA Health.”

Picton said the government received advice from pharmacists and doctors that launching a campaign early in the scheme would overrun pharmacies, but now that demand was “steadying”, it was appropriate to promote it more heavily. 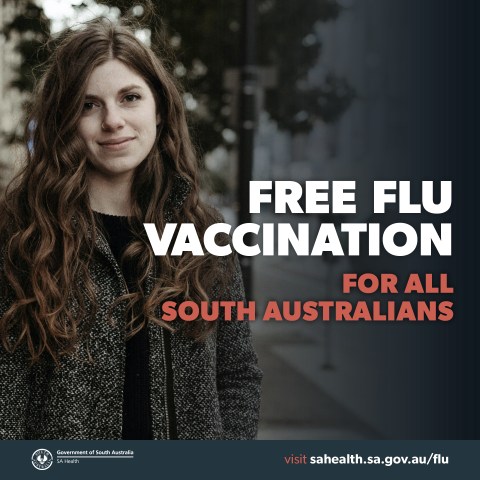 One of the ads the government will roll out as part of its campaign to encourage people to get vaccinated. Image: Supplied

“There are still people that aren’t aware of the program and we want to make sure everybody is aware of it,” Picton said.

“Increasingly, with all these programs, the longer they go the more you’re trying to target the hard-to-reach demographic.

The health minister said there was “still a good amount of time for people to come forward before the 30th of June to utilise this program”.

He said the government didn’t have a specific target in mind for how many people it was aiming to reach.

“We’re never run a program like this before; we’ve never had a free flu vaccine program for all South Australians to come forward,” he said.

“We don’t know what the uptake will be, but we’re hoping it’s as many people as possible because ultimately that will help to keep the pressure off the health system.”

Panayiaris said a federal government decision to release some of its flu vaccination stockpile back into the private market had alleviated earlier concerns that stocks could be depleted.

“Pharmacies only open bookings based on what they can do, which means that if they don’t have any extra capacity, they can’t actually ramp up much more,” he said.

“It’s allowed basically the pharmacies to manage their stock more appropriately and, in the meantime, there has been a relief from the national medicine stockpiles bringing more vaccines back into the private market, which has obviously then helped with alleviating that stock shortage.

“There isn’t any immediate signs at the moment that we’re going to run out of vaccine.”