According to Australian Bureau of Statistics data released yesterday, Australians are building houses on smaller blocks with the average site area of new house approvals decreasing considerably over the past 10 years.

While block sizes have steadily decreased in all five major mainland capitals, Adelaide’s have shrunk the least, losing 30sq m (6 per cent) in the past decade.

In fact, new house blocks in Adelaide actually grew three per cent in 2021 from 453sq m to 468 sq m, overtaking Brisbane for Australia’s biggest suburban blocks in the process.

The floor area of new houses across Australia has fallen slightly over the past decade from 245sq m to 242sq m.

New homes in Adelaide have also bucked this trend, increasing in size from 209sq m in 2012 to 220sq m in 2021. This ranked Adelaide fourth in house footprint size ahead of Perth but behind Brisbane, Melbourne and Sydney.

However, Adelaide is now the only city where the house footprint accounts for less than half of the total block size.

“The combined trends of smaller site areas and largely unchanged floor areas of house approvals over time shows that Australians are building similar-sized houses with smaller yards,” the ABS said.

“This reflects a combination of factors, including increases in land cost, a greater proportion of new houses being constructed in urban infill locations, and more two-storey houses that maximise living space on smaller lots.”

The latest building approval figures, also released yesterday, show that in April South Australia had 795 new homes approved for construction, up 7.7 per cent on March in seasonally adjusted terms. 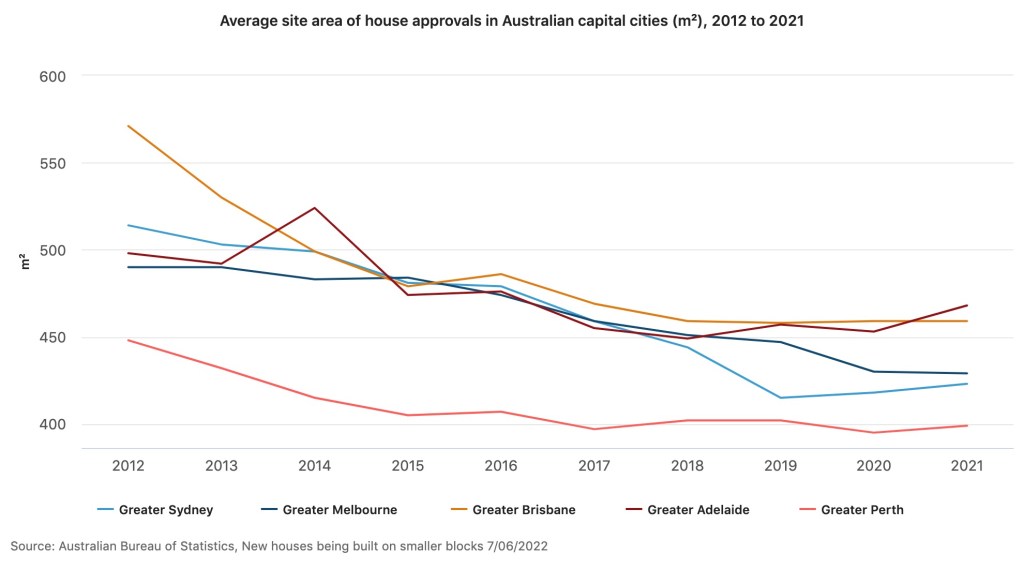 Graph courtesy aBS.In the first 10 months of the 2021-22 financial year, there have been 8354 new homes approved in SA with 6496 of those in Greater Adelaide.