The State Government commissioned an urgent review – describing the situation as a “substantial stuff-up” – after 92-year-old Maureen Wortley was forced to wait outside the emergency department on Mother’s Day evening in her dressing gown after a fall, along with other patients.

“It is unfortunate that this situation occurred, and it is reassuring that the Executive of NALHN (Northern Adelaide Local Health Service) has recognised this oversight and taken steps to ensure it does not happen again,” Baggoley found.

Maureen Wortley and other patients were forced to wait in the cold on May 8 as part of the hospital’s COVID policy to triage non-urgent patients in a tent outside and test them for COVID before allowing them inside the emergency department.

The hospital has since changed that procedure, bringing all patients inside and asking everyone to wear N95 masks.

Baggoley found the outside triage facility was “not ideal but it appears to have been the only practical option”.

“It could not be sheltered from some prevailing winds, the overhead shelter is very high, and it is adjacent to an area that serves as the ambulance ramp and as a construction site,” he said in his public report.

“I was advised that a windbreak could not be applied to the mesh fence as it could cause the fence to become unstable. There is no protection from extremes of ambient temperature.” 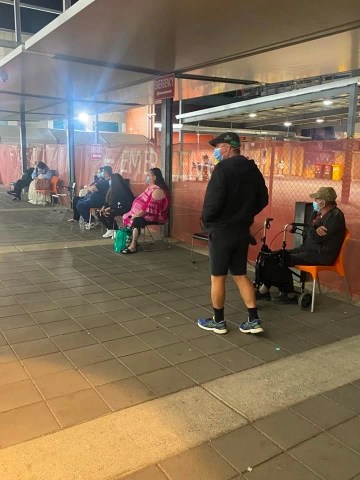 Other patients also waited outside in the cold on May 8. Photo: supplied

Baggoley found the hospital had a plan in place to bring patients inside for triage and COVID testing when the weather was hot – above 30 degrees – “but it appears that there was no plan for cold weather”.

“It was observed that a portable heater was placed over the external triage station on the evening of the 8th May whereas I am advised that no heaters were distributed or employed in the rest of the external, tented, area, nor were blankets provided unless specifically asked for by patients,” he said.

“The seating was described as quite uncomfortable.”

Baggoley determined that the policy to test patients for COVID prior to their entry into the ED was “wise and in line with practice elsewhere in Australia”.

“There were valid reasons for it to be undertaken externally, albeit in a physical setting that was not optimal for patient care and comfort,” he said.

Baggoley noted in his report that it was the patient’s family – not the patient herself – who had complained about her treatment.

She had insisted she had been “treated like a queen”, and was “not unhappy with her wait” and “was not cold”.

“While the patient was complimentary of her care whilst outside the ED, I accept the observations of her family that she, and others, were significantly affected by the cold that evening and that insufficient attempts were made to address those needs,” Baggoley said.

“That a heater was being utilised at the triage station that night, but nowhere else, reinforces that conclusion. Portable heating for the waiting patients and the pro-active provision of blankets to them on that cold evening would, most likely, have prevented the distress that has been described.

“This situation was the result of an oversight by the LMHS (Lyell McEwin Health Service), given that plans were in place to test patients internally in the event of hot weather, but not in the event of cold weather.”

But Maureen Wortley’s son Craig Csongrady – who initially blew the whistle on his mother’s treatment by posting about it on Premier Peter Malinauskas’s facebook page – told InDaily this morning that “obviously everyone’s in damage control and no one really wants to admit weaknesses in the system”.

“They were all cold outside and there was a wind and it felt like 9 degrees,” he said.

“Mum was bare-legged in her dressing gown until I got a blanket organised for her. She’s 93 next month and she doesn’t want to upset the apple cart anywhere.”

Csongrady said the mistakes made were “not oversights – they’re failures”.

“The left-hand doesn’t know what the right-hand is doing and there is lack of scope,” he said.

“This should have been thought about way ahead of time. They’ve looked at it now, it has been addressed and if it took me putting my head on the block to actually see this, look around and be aware of this, not only for my mum’s sake but for patients in future… if this wasn’t addressed, how long would that have gone on for?

“It’s about empathy. I’m so glad the State Government actually acted on that and did it really quick.”

Csongrady said his mother spent almost a month in hospital after her admission and was only released on Friday.

Health Minister Chris Picton said “this was a case which shocked many South Australians”.

“The report doesn’t make recommendations – it acknowledges that the issue has been addressed and says it that was an oversight by the executive there,” he said.

“I’ve spoken to the family who have been appreciative of the report and the work that’s been taken to make sure this doesn’t happen again.”

The hospital has said it will only revert to the outside triage and testing system “in times of surge or overcapacity” and that the outdoor facilities will be improved.