The bosses of the party’s Right-faction unions have also declared they have “lost faith in the Board and Management of Return to Work SA”, calling for an overhaul.

In just its third month in office, the Labor Government has placed itself at loggerheads with the union movement, with several of its affiliated organisations declaring “outrage” over legislation, to be introduced today, that will toughen the state’s compensation regime for injured workers in a bid to save businesses from punitive premiums.

The standoff comes months after the High Court rejected a Return To Work SA appeal against a decision in the case of injured truck driver Shane Summerfield, who was left permanently injured after a 2016 workplace accident.

At the time, then-Liberal Treasurer Rob Lucas called the case’s precedent “a major potential hit to employers”, arguing the resulting legal uncertainty “could see average premiums rise from their existing low 1.70 per cent to 2 per cent, or higher, in 2022-23 – potentially adding thousands of dollars onto a businesses’ annual running costs”.

“The next parliament will have to consider whether it’s prepared to strike a better balance between the rights of workers and the ability for employers to be able to employ more and more people,” Lucas said at the time.

And the new Labor Government has done just that, with Attorney-General Kyam Maher today seeking to tighten the compensation regime – in the process igniting a potential war with the unions that backed the Government into office, including those comprising the Premier’s own faction.

A letter, seen by InDaily, has been sent to all Labor MPs today, signed by the leaders of four Right faction-aligned unions, including Josh Peak, who runs the Shop, Distributive and Allied Employees Association, the hub of the dominant Labor Unity faction that Malinauskas led before his move to parliament.

“It is disappointing that so early in the term of a new Labor Government our unions are writing to you due to a decision of your cabinet and caucus that hurts working people,” says the letter, also signed by Australian Workers Union boss Peter Lamps, the Transport Workers Union’s Ian Smith and Jason Hall of the Financial Services Union.

“Merely weeks ago, South Australians elected the Labor Party after you campaigned on a positive vision for the future… it was because of this – because of your commitments to workers – that our unions campaigned and supported your election,” they said.

“The decision by the Government to pursue changes to the Return to Work Act to overturn the Summerfield Decision isn’t just an attack on working South Australians – it attacks our most severely injured.

“It attacks workers who without adequate support could face a life of poverty.”

The unions insist the Return To Work SA board has “undertaken no steps to ensure the scheme was adequately funded” despite the Summerfield action looming as a potential issue for some time.

“Instead, they have allowed the underfunding of the scheme to develop to a point where they have threatened a massive increase in the RTW Levy unless the government cuts entitlements,” the letter said.

“The unelected Board of a government agency should not be making law. That’s not their job, it’s yours.”

They said they had “lost faith” in the organisation’s board and management, arguing RTW’s “mismanagement of injured workers’ entitlements [has] led to this ultimatum being placed at the feet of your government”.

They demand the Bill’s postponement, pending a “full and proper consultation on the proposed bill with us and our members”, as well as a “full review of the Return to Work system, including a review of the internal culture, practices and procedures” and an investigation into the board’s claims that liabilities could skyrocket.

The wider union movement is also up in arms, with SA Unions secretary Dale Beasley saying “the South Australian Union Movement is outraged at the State Labor Government’s decision to legislate to nullify a win for injured workers in SA.”

“The best way to reduce the cost of the Return to Work system is to make workplaces safer to begin with,” he said. “Instead, the Government is submitting to the whims of bean counters and pushing the cost of the system onto workers by slashing their entitlements.”

The CFMEU blew the whistle on Labor’s plans after a briefing this week, declaring: “South Australian workers are entitled to feel betrayed by the Malinauskas Government as its shock plans to cut workers’ compensation to some of South Australians most severely injured workers have been uncovered.”

Attorney-General Kyam Maher told InDaily in a statement that Labor had historically “introduced many important industrial relations reforms and this Government has a strong agenda including criminalising wage theft and introducing industrial manslaughter”.

“Our long track record standing up for the rights of workers speaks for itself [but] it is important to strike the right balance,” he said.

“The former Liberal government kicked the can down the road on this issue until after the state election… the clear advice to the new Government was that if we did not act, SA businesses faced the prospect of paying the highest premiums of any state in Australia.”

ReturnToWorkSA today announced premiums would for 2022/23 would be set at 1.8 per cent – a rise of 5.9 per cent from last year.

However, the board of the body said a premium increase of 25-30 per cent would have been “realistic” if the Labor Government hadn’t advised it that it would correct the “serious legislative anomaly” posed by the Summerfield case.

“The capacity of ReturnToWorkSA to keep premiums from rising further as a result of the Summerfield decision is contingent upon the proposed amendment to the legislation being passed by the Parliament of South Australia,” the board said in a statement. “If this is not addressed in a timely manner, consequent incurred costs to the Scheme will be incorporated into future pricing decisions including bringing forward the 2023/2024 APR decision to provide employers with as much notice as possible.”

Employer association Ai Group said if “major issues” with the Return to Work scheme were left unresolved they would lead to “soaring premiums and poorer health outcomes”.

Ai Group said last year’s Supreme Court decision changed the way that Return to Work injuries were combined in permanent impairment assessments, resulting in “many more people reaching the 30 per cent threshold to be classified as seriously injured workers and a subsequent big rise in premiums”.

“The court decision created the largest affordability and durability challenge since the scheme’s inception. The changes did not reflect the intent of the original legislation which was designed to help people get back into the workforce, resulting in better health and economic outcomes,” Ai Group SA Head Jodie van Deventer said.

“The significant rise in Return to Work premiums paid by employers would have been highly damaging. It is essential that South Australia’s business environment remains attractive and competitive and we are looking forward to the proposed legislative changes achieving this.”

Business SA director of policy and advocacy Kendall Crowe said the scheme would fail unless it was rectified.

“The Summerfield decision threatens the scheme’s design and has landed South Australian employers with a $1.1 billion liability,” she said. “It also puts a potential 20,000 jobs at risk if the business community is forced to shoulder significantly increased premiums.

“South Australian businesses need the Government of South Australia to legislate a fix to avoid the significant financial impact of the current interpretation.

“In its current state, the scheme will fail. It will become unaffordable — South Australia will return to the old days when we had the highest work cover premiums in the country. This will significantly reduce South Australia’s business competitiveness. Businesses will move interstate or not set up here at all.” 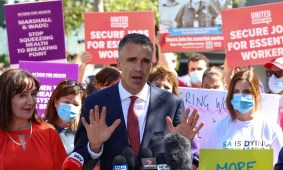 The Government will need to rely on the Liberal party to pass the legislation in the Upper House, with the Greens and SA Best both expressing strong opposition to the move.

SA Best MLC Connie Bonaros described the proposed legislation as “the single biggest act of bastardry and betrayal of injured workers – and the rank and file members of trade unions – this state has ever seen”.

“It strikes at the very foundations on which the Labor Party was apparently established – protecting the rights of workers,” she said.

A spokesperson for Liberal leader David Speirs told InDaily the Opposition had not yet seen the Government’s proposal.