After a campaign fought largely on health commitments, the first Labor budget since 2017 predictably delivered a record increase in spending on the sector, with an extra $2.4 billion for health services in the four years to 2025-26.

That includes $541m for 326 extra hospital and mental health beds, with the budget also providing for an additional 160 beds as part of an expansion of Flinders Medical Centre and 68 as part of a rebuilt Mount Barker Hospital, but with completion of both projects to fall outside the forward estimates.

The budget contains funding for an additional 350 paramedics and ambulance officers, 304 nurses and 101 doctors over the next four years.

That prompted Mullighan, when asked the now-standard question about how he would personify his budget – after predecessors Tom Koutsantonis and Rob Lucas described their own financial statements as, respectively, wearing a “sexy red dress” and “a business suit with sensible shoes” – to instead point to the document’s cover photo.

“I’m not wanting to characterise budgets like that… but to the extent that we can, I think we put it on the front cover: it’s a South Australian in a green uniform. It’s a nurse in a blue uniform or it’s a doctor,” he said. 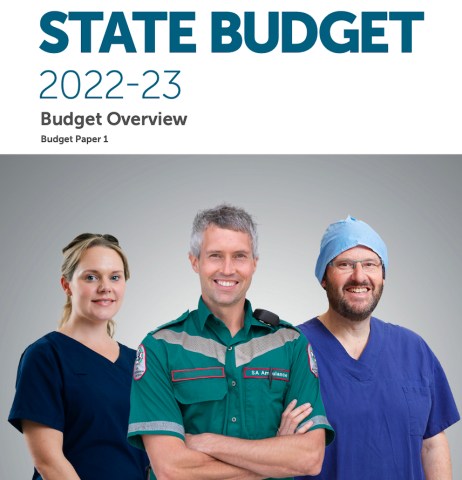 The cover image of the state budget documents.

The COVID pandemic will continue to eat into spending, with $648m allocated over the current and next financial years.

An excerpt from the budget papers.

“We are delivering every single one of the commitments we made at the last state election,” Mullighan told reporters at a budget lock-up today.

“We’re returning the budget to surplus, improving our debt metrics… we’ve made sure we stay true to the commitment that there are no new taxes in this budget…

“Now is not the time to be imposing higher taxes on South Australians.”

And, he said, “we are providing an absolutely extraordinary investment in health, far beyond anything provided in any previous budget”. 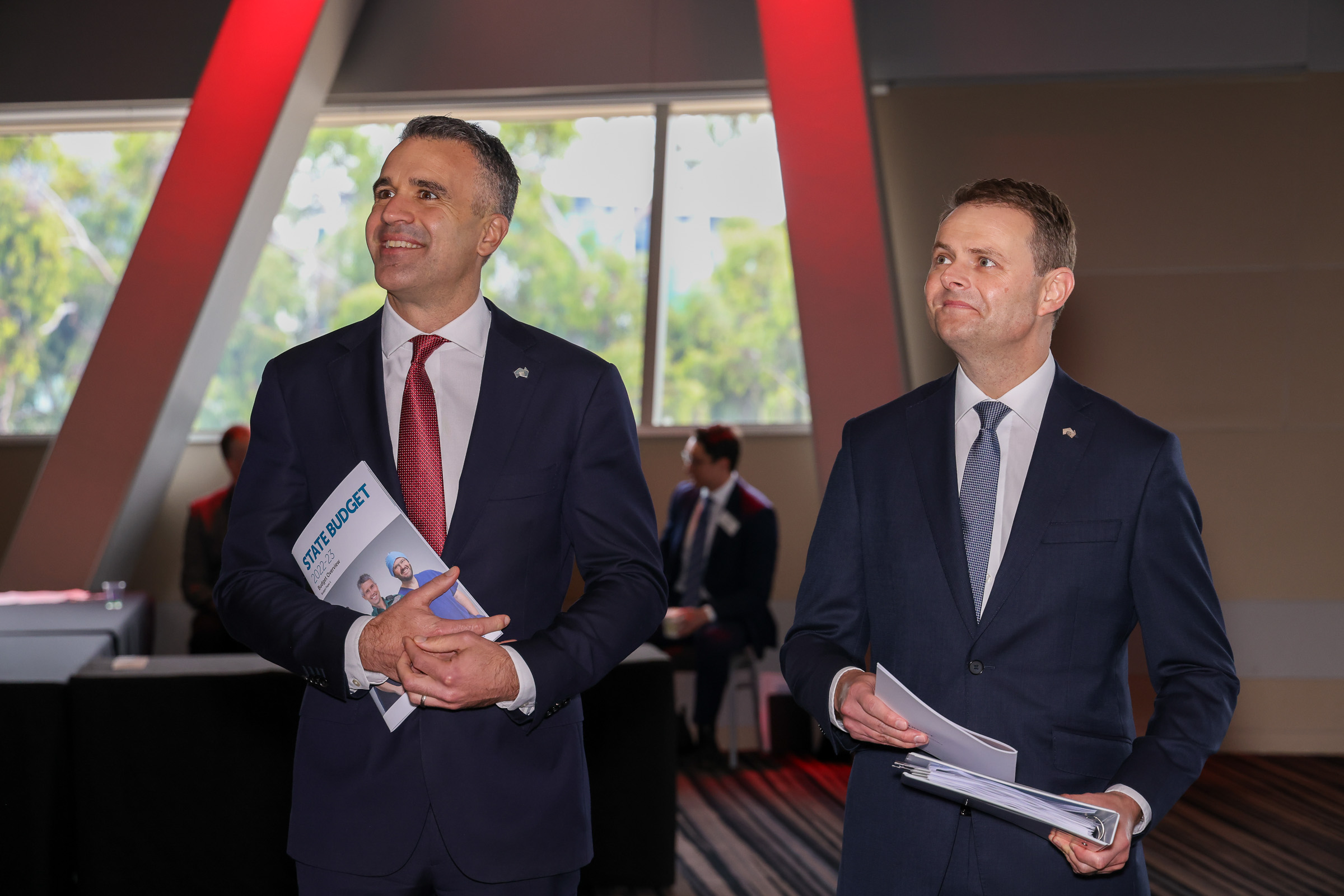 However the optimism was tempered by warnings of expected significant blowouts in the state’s biggest planned infrastructure projects, with the cost and scope of both the new Women’s and Children’s Hospital and the final phase of the North-South corridor currently under review.

An election commitment to allocate an additional $100 million to build 50 extra beds in the planned new WCH, currently due to open in 2027, has lifted the total project cost from $1.95 billion dollars to $2.05 billion dollars.

But the Treasurer told InDaily: “I think we are realistically expecting that that cost is going to increase much further.”

“The rapid escalation in construction costs and infrastructure delivery costs, I think we estimate is going to make its presence felt in this project,” he said.

Mullighan has asked a “cross agency working group” including the Health, Treasury and Premier and Cabinet departments “to go away and provide a better estimate”.

“But we’ve got to be honest about this – this is going to cost more than what the community has been told,” he said.

“It’s a question of how much more.”

Likewise, the delay in the South Rd project, while relieving spending commitments in the forward estimates, will come at a cost of promised Commonwealth funds and likely escalating building costs, the Treasurer said.

But a more pressing negotiation with Canberra looms, with Mullighan flagging a feud over the current national share.

Budget papers state this “largely reflects an upward revision to the national GST pool across all years in the Commonwealth Budget, partially offset by a reduction in South Australia’s grant share from 2022-23”.

“We must get a much better share of GST than what we’ve got at the moment… we’re handing GST revenues over to Western Australia.”

He said SA was losing out on around $290 million a year while “if you’re a state like NSW it’s more like $1 billion”.

“This is happening while WA is in one of the greatest mining booms it’s ever experienced – and every other state and territory is reporting a budget deficit,” he said.

Mullighan said the inequity had gone “from being unsustainable to absolutely outrageous” and was “clearly something that needs to be fixed”.

“If we don’t fix this arrangement SA stands to lose hundreds of millions of dollars a year in GST arrangements,” he said.

“I think [WA Premier] Mark McGowan’s got some questions to answer.” 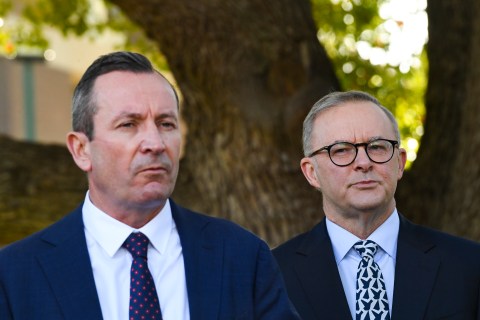 The bottom line has also been bolstered by “a really extraordinary increase in stamp duty revenues” over the past 12 months, the Treasurer said.

The budget is predicated on key assumptions that effectively signal a steady-as-she-goes economic position over the forward estimates: from a surging position on the back of federal stimulus in 2021-22, economic growth is set to continue at 2.25 per cent a year, while employment growth is estimated to plod along at 1 per cent a year, from 3.23 per cent in the current year.

An excerpt from the budget papers.

But while key agencies have been asked for ongoing savings – to be determined by their respective CEOs – Mullighan says public service numbers will ultimately increase, with a focus on hiring health staff in line with election commitments.

“We’re not expecting CEOs to be marching large numbers of staff out the door,” he said.

“As dry as this is, we’re looking for expenditure reductions.”

Along with previously-announced cuts of programs championed by the former Liberal government – notably a home battery subsidy scheme to save just 19m – Mullighan says his savings are predicated on the methods outlined in his pre-election costings.

“We’ve asked for $714 million in savings over the forward estimates,” he said.

“We’re not proceeding with the [Marshall Government’s] basketball stadium, we are using some of our unallocated capital contingency to contribute towards our infrastructure projects and we’ve been able to increase beyond our election commitments with some of the additional revenues which have come through in our latest forecasts.”

The Treasurer said “chief executives and their ministers have got full flexibility about how they deliver the [required] savings… maybe it was a priority of the former Liberal government that they don’t want to do any more, then they can put that forward as a saving”.

But Health is one department insulated from the cutting fervour, with the trouble-plagued and pandemic-affected agency to be quarantined from $400 million of savings measures over the forward estimates.

“Do we expect a victory party in SA Health? Absolutely not,” Mullighan said.

“Maybe some of them might issue a momentary sigh of relief that firstly we are delivering our election commitments and we’re not placing unreasonable expectations when it comes to savings.

“This is a health system under the greatest sustained pressure that any of us could ever conceive of.” 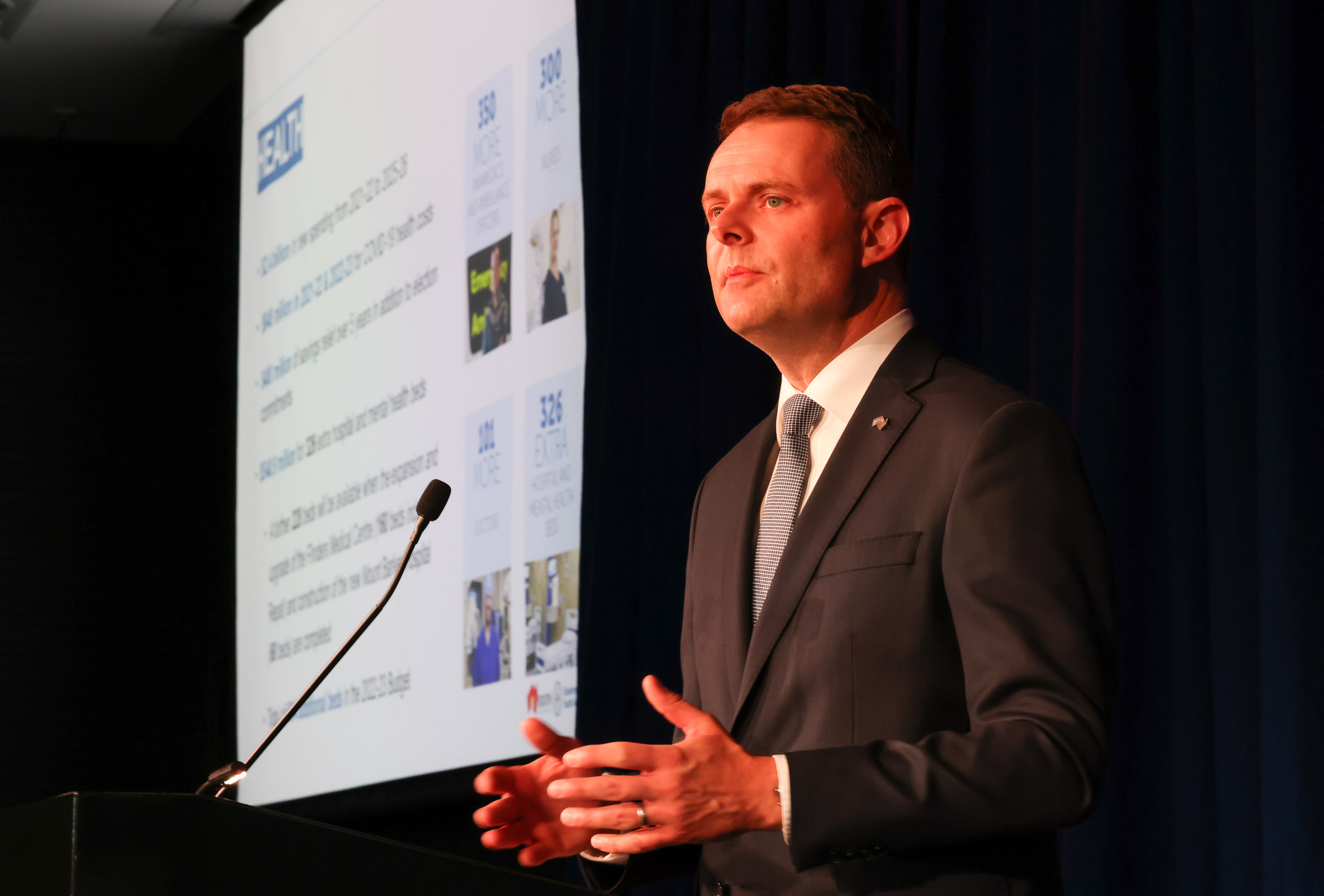 Net debt, however, will continue to increase – albeit at a slower level, around $1.5 billion a year, than forecast in the previous budget – while the net debt to revenue ration will balloon from 100.6 per cent in the current year to 119.4 by 2025.

“It continues to increase but at a lower rate that what was previously projected,” Mullighan said.

But his rhetoric was measured, warning of future challenges, particularly with uncertainty over soaring interest rates.

“We need to start the process of budget repair… because of the sharp increase in interest costs on the government,” he warned.

“We don’t know how this inflation environment is going to play out.”

He said extra interest repayments would represent “money we don’t have available to spend on extra health, police, education and so on”.

Wage restraint will be an expected feature of this commitment to fiscal discipline, with Mullighan conceding some difficult negotiations ahead.

“When it comes to dealing with ambos and nurses, we would hope that we can demonstrate we’re trying to ease some of the actual workload on them by increasing the number of staff,” he said.

“But we’ve got to be realistic – the days of settling a wage negotiation with a 1.5 per cent outcome for workers when quarterly inflation figures are running as high as they are – and through the year inflation figures nationally are up more than 5 per cent – mean that unfortunately we’re going to have to recalibrate what we think is achievable from a government.”

But he said “there may well be other priorities of those employee groups which are not necessarily wage related, which they will want to talk to government about and that will factor into our considerations as well”.

“So it’s not just a simple cut and dry: what’s the inflation rate, what’s your wage offer going to be,” he said.

“It’s a more complex offer that we will be talking through with those employee representatives particularly over the next 12 months.”