The Malinauskas Government says its first Budget contains no new taxes, no tax hikes and no cuts to frontline workers in health, education or emergency services – although staff and services in other government departments have no such guarantee.

The government will inject an extra extra $2.4b into health as part of its major pre-election promise to “help start to fix the ramping crisis” and boost hospital and ambulance services.

But it’s demanding $713m in savings across its services over four years, beginning with $165m this financial year and rising to $192m by 2025-26, with some departments “required to deliver modest efficiencies” to reach savings goals.

The Department of Premier and Cabinet in particular has been targeted for a $65m savings clawback over four years.

Another $540m has been budgeted over four years for 326 more hospital beds, with 228 more to be available after the FMC upgrade and new Mt Barker Hospital completion.

More than $40m has been set aside for hospital and emergency department upgrades across the state including Port Pirie and Port Augusta, Kangaroo Island, Mt Gambier and Keith.

An extra $124m is allocated over four years for another 350 ambulance officers and paramedics, with extra funding for another 101 doctors and 300 nurses.

A futher $120m is allocated for a new CBD ambulance base, on top of $67m for four new ambulance stations and to rebuild and upgrade existing bases.

The government is hailing a “once in a generation” investment of $294m to improve South Australia’s mental health services.

The funding will go towards 100 new inpatient mental health beds, including 72 across the Queen Elizabeth, Modbury and Noarlunga  hospitals at a cost of $157m over four years.

More specialist mental health nurses, child psychiatrists and psychologists are also forecast, along with 100 new mental health support specialists in primary and secondary schools at a cost of $50m over four years.

More than $7.8b has been earmarked for roads over four years, including $400m for a Marion Rd-Anzac Highway to Cross Rd upgrade, $125m to duplicate Main South Rd between Seaford and Sellicks Beach and $100m for LeFevre Peninsula road and rail projects.

A further $120m has been budgeted for a Majors Rd on-off ramp to the Southern Expressway, $150m for Adelaide Hills road upgrades, a further $75m for South Eastern Freeway traffic safety projects and major funding commitments for regional roads across the state.

Taxpayers will fork out $600,000 for the Bragg by-election triggered when former Deputy Premier Vickie Chapman announced her resignation from the eastern suburbs seat just one month after the Liberals’ March defeat.

The last by-elections South Australia held – in Cheltenham and Enfield in 2019 – reportedly cost taxpayers up to $700,000 combined following the resignations of former premier Jay Weatherill and his deputy John Rau.

Some of the $600,000 provided for the Bragg by-election will be used to fund political parties’ election campaigns.

The budget includes $1m to fund a “Commission of Inquiry” to advise on the most “efficient and cost-effective” means of reversing the privatisation of the state’s train and tram network.

The inquiry will also examine the feasibility of bringing the state’s bus service back into public hands. Adelaide Metro’s bus service has been privatised for more than 20 years.

There is also $55.1m for the re-establishment and operation of a rail extension from the Outer Harbor line into the heart of Port Adelaide, and $12m to establish a dedicated express bus service fleet in Mount Barker and the Adelaide Hills.

Free public transport for seniors will continue until 2025-26.

The Department of Infrastructure and Transport has been targeted for $15.6m in cuts next financial year, increasing to $27.7m from 2025-26.

The State Government is ditching an electric vehicle subsidy scheme designed to increase the takeup of home charging stations.

The former government’s EV Smart Charging Subsidy scheme was set to provide 7500 subsidies of up to $2000 for households to install electric vehicle smart charging systems.

Axing the scheme will save $11.2m. Labor says it still intends to repeal an electric vehicle tax from the former government and provide $41m in funding to support EV take up. 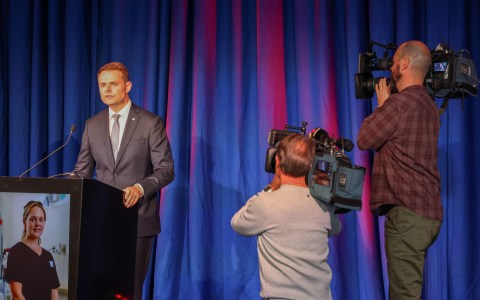 The Environment Department has been targeted for a $2.4m cut to operating expenses next financial year, increasing to $4m by 2025-26.

The Environmental Protection Authority and Green Industries SA have also been targeted for cuts of $384,000 and $358,000 respectively.

The former government’s $10m “Greening Adelaide’s Heart” scheme to fund green initiatives and cooling projects in the CBD has been axed along with a $1.5m “Greener Neighbourhoods” program which funded council tree planting programs.

A $1m commission will be set up to advise the State Government on merging two of South Australia’s three main universities. Premier Peter Malinauskas while in Opposition championed such a merger.

The commission, consisting of three full-time equivalent employees, will be headed up by an “eminent commissioner with experience in higher education”.

The commission will “engage with business leaders, university unions and student representatives” before advising the government. It has been funded for 12 months with an announcement on a lead commissioner expected later this year.

The Adelaide Fringe will receive a new $2m in annual funding to “host a headline anchor event each year”. The funding will also be used to market the event interstate and overseas.

The Adelaide Film Festival will receive $500,000 a year to transform from a biennial to an annual event.

Just over $70.2m has been set aside to host the Adelaide 500 over the next four years, including $21m for its return this December.

The South Australian Motorsport Board tasked with delivering the race is being re-established with around $300,000 in annual funding.

The Adelaide Motorsport Festival will also return with $1.38m in funding this year.

Most of the Aboriginal affairs projects outlined in the budget are Labor election promises.

They include $500,000 to establish an advisory commission to tackle the overrepresentation of Aboriginal people in custody, $1m to build monuments commemorating Aboriginal leaders and $300,000 to undertake a cultural mapping project around Mount Terrible.

The government will also spend $500,000 each year to implement the Uluru Statement from the Heart, which involves establishing an Aboriginal Voice to Parliament, restarting the treaty process and launching a truth-telling process.

Yadu Health Aboriginal Corporation in Ceduna will receive $2.5m from the state government – on top of $13m committed by the federal government – to upgrade its mouldy and “unsafe” clinic, while two new police posts will be established in the APY Lands.

Labor’s election promise to take ownership, rebuild and operate the Adelaide Aquatic Centre will cost $82.4m over four years, with a community consultation to determine the site for the new centre.

Renew Adelaide – which runs a program offering new businesses short term rent-free access to underutilised CBD spaces – will receive $450,000 in government funding over three years to double its outreach. The program is currently funded by the Adelaide City Council.

As previously reported by InDaily, the government will spend $2.1m to upgrade the private living quarters at Government House, while $673,000 will be spent on “urgent structural works” at the Migration Museum on Kintore Avenue.

Spending to increase by about $21m each year in recognition of the growing number of children and young people entering state care.

Budget papers show the government projects 4910 children will be placed in out-of-home care in 2022-23 – up from the estimated 4719 this financial year.

The government will also hand out just under $2m worth of grants each year to organisations such as CREATE and Grandparents for Grandchildren.

As InDaily reported previously, the government will spend about $450,000 each year to re-establish the Child and Young Person’s Visitor– a watchdog who advocates for children in residential care.

Over $2m will be cut from the Department for Correctional Services each year, with the department to review its corporate functions to determine where funding could be slashed.

Another Youth Court magistrate will be appointed, while just under $1m will be spent to address current case backlogs at the Coroner’s Court.

The government will restore the women’s domestic violence court assistance service, which will cost $200,000 each year.

It will also spend $1m over three years to launch a northern and southern domestic violence prevention and recovery hub, following an election promise.

First-home buyers would only need to save up a three per cent deposit to buy a new house under an expansion of an existing scheme, which will launch by the end of this calendar year.

The “low deposit home loan” would only be eligible for South Australian residents purchasing a newly-constructed home or building a home, who satisfy existing HomeStart lending criteria.

However, $1m each year will be cut from grant payments to the South Australian Housing Authority. The government says the loss of funding will be “accommodated through operating efficiencies across the agency”.

Not many new announcements for this portfolio. As announced previously, $118.8m will be spent expanding Adelaide High School and Roma Mitchell Secondary College to meet projected student enrolments by 2024.

A Royal Commission into early childhood education will cost $2m, while $16.8m will be spent from 2023-24 to relaunch midyear reception and preschool intakes.

The government will also appoint autism lead teachers in every public primary school from next financial year, costing $4m.

A program that aimed to provide 750 supported apprenticeships and traineeships across government departments and agencies will be wound back.

Only 350 trainee and apprenticeships places have been filled in the program. Cutting it will save $15.5m, according to the budget papers.

Just under $12m in additional investment will be provided to the skills and training system along with $8.8m in skill shortage funding.

Mount Gambier’s TAFE SA campus has been targeted for a $5m upgrade in 2023-24. $3m in annual funding has also been provided to individual TAFE support courses in the aged care, disability and early childcare sectors.

The Department of Innovation and Skills has been targeted for $21.1m in operating savings next financial year.

The Department of Primary Industry and Regions has been targeted for $3.8m in operational savings next year.

The government is putting $13m towards fruit fly eradication in 2022/23 and $2m across four years to establish a Cross Border Commissioner.

$12m over four years to reintroduce registration concession for owners of vehicles in remote areas.