After a brief 48-hour period in which prospective candidates were able to nominate for the party’s only safe seat in metropolitan Adelaide – which is being vacated by former Deputy Premier Vickie Chapman – the party yesterday rushed through a candidate review committee process, rubber-stamping four of the five nominees.

Those were former staffers Jack Batty and Sandy Biar, lawyer Melissa Jones and businesswoman Cara Miller, the latter two of which have previously sought preselection in neighbouring Waite.

But Potter, a former staffer who left the party after raising allegations of sexual assault against an unnamed former colleague in 2019, is understood to have been rejected by the party’s ruling state executive at a meeting last night.

Sources cited her recent efforts supporting independent candidates in safe Liberal seats in both the state and federal elections, which she did on behalf of her consultancy Suffragette Group, which provides “strategic advice and communications support to women candidates”.

The decision could pave the way for Potter – who has been previously married to new state deputy leader John Gardner – to run as an independent in the forthcoming by-election, at which the Greens and Labor are also set to field candidates in the eastern suburbs seat, which the Liberals hold by 8.2 per cent after their March state election drubbing.

Asked if she would consider running without Liberal endorsement, she said: “I’ve received significant private support from Liberal members and former Liberal members – I’m going to go back and have a chat to them about what direction they want to see the party going in, the outcome of this [decision] and what it means.”

Opposition Leader David Speirs, a member of the state executive, told InDaily he was “comfortable” with the decision.

“The preselection vetting process is an administrative matter for the Liberal Party,” he said.

“I sat on the Candidate Review Committee and I was comfortable with the decision to disallow Ms Potter’s candidacy.

“We have four great young candidates moving forward and they will now put their case to local grassroots Liberal members living in the seat of Bragg.”

It’s understood all nominees were given little notice late yesterday to take part in an online interview with the candidate review committee, but that while she was invited to participate, Potter was never contacted.

Several hours later, she was informed the meeting had concluded without interviewing her.

She was not been personally informed of the executive’s decision until late this morning – several hours after other candidates were told they had been cleared to contest a preselection ballot on Sunday week, June 5.

An 11am email to Potter from resigning state director Sascha Meldrum, seen by InDaily, says: “As you know, under the Party’s Constitution you are not eligible to be a candidate for preselection as you have not been a member for the past three months, choosing to join the Party on the day nominations closed.”

“In order for you to run as a candidate for preselection, State Executive needs to grant you special dispensation to waive this Constitutional requirement,” Meldrum wrote.

“State Executive met last night and did not agree to provide the waiver that would allow you to proceed as a candidate for preselection.

“I understand this was primarily due to the fact that you have actively campaigned against the Liberal Party in the two most recent elections.”

In an emailed reply, Potter wrote: “Thanks for this advice… while I don’t propose to enter into a debate into this matter, I note that such dispensation has been granted previously for preselection candidates, in particular, if memory serves, our now-former Premier Steven Marshall amongst others.”

“Given the tight 48-hour window to nominate, I was forced to make a series of swift decisions about my desire to help rebuild our party,” she continued.

“In the end, I made a decision to come back to our party at this crucial time, and offer my significant skills and experience in service to our party.

“My services as a strategic adviser and campaign professional were engaged by independents at recent elections, akin to a lawyer being engaged by clients. I fulfilled my contractual obligations to them.

“I had hoped that maybe the Liberal Party would seek my services in this capacity, given the obvious success of those who have engaged me. They could have and they chose not to.

“These are certainly matters I intended to canvas with the Committee, if I had been afforded any procedural fairness and an opportunity to speak to my nomination last night.

“As we have discussed, despite making myself available at an hour’s notice, and waiting for a subsequent 4 hours to be phoned, I was excluded from any discussion.

“I wasn’t even advised that the meeting had concluded and I would not be required.

“It was most disappointing.”

She went on to wish “all preselection candidates the best for this important contest”.

A Liberal insider said the party was bracing for Potter to run as an independent – potentially splitting the Liberal vote, and putting further pressure on preselectors to elect one of the two women in the contest.

“We didn’t keep her as a candidate and she’ll try to use that against us – but I don’t see how she can, quite frankly,” the source said, arguing Potter failed the criteria for prospective candidates to seek preselection.

It’s likely Birmingham recused himself as a former employer of Potter’s, although he declined to respond to inquiries. 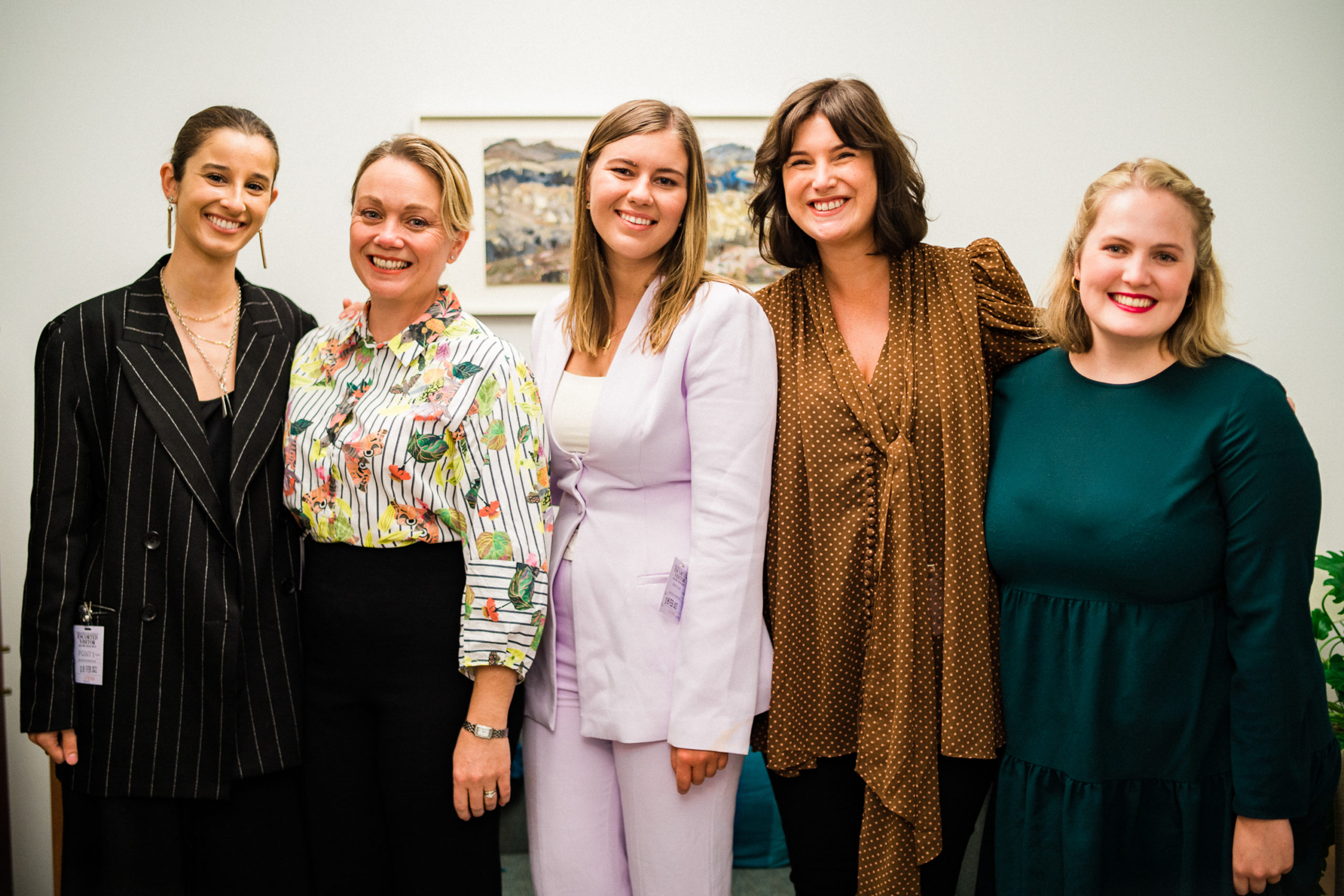 Potter with fellow whistleblowers Chanel Contos, Rachelle Miller, Brittany Higgins and Josie Coles at federal Parliament House in February, ahead of a formal apology by political leaders to victims of sexual harassment and abuse in parliament. Photo via AAP, supplied by the office of Zali Steggall MP.

In 2019, Potter publicly raised an allegation of sexual assault she said had occurred while she was working as a Liberal staffer in Birmingham’s office, with the senator last year confirming he declined to meet with her at the time, despite having been made aware of her allegations.

He told her via text message at the time: “I understand you have made some serious allegations to media about an incident that you claim occurred during your time working in my office. I encourage you to talk to professionals about such matters and suggest that the Women’s Information Service or 1800Respect may be appropriate options.”

The subject of Potter’s 2019 complaint, who is understood not to have worked in the office, was reported at the time to “strongly deny” the allegation.

The Greens are expected to unveil a candidate next week, while Labor is likely to open nominations in coming days, but will likely not choose one until the Liberals have made their decision.