The Malianuskas Government has announced it will establish a $100 million Economic Recovery Fund to support business development via several rounds of grants.

The fund, announced on Thursday ahead of next week’s state budget, will support grants to businesses over the next four years and allow the government to make “strategic investments” to bring national and international companies to SA.

The government will also spend an extra $4.2 million to establish InvestSA, which will be charged with selling South Australia’s credentials nationally and internationally.

Mullighan will hand down the new Labor government’s first budget on June 2.

South Australia has recorded one COVID-19 death and another 3837 cases.

Today’s cases are slightly down on the 3975 reported on Wednesday. PCR testing was also down 3.4 per cent over the last 24 hours.

The number of people in hospital with the virus remains steady at 238, up from 236 on Wednesday, with nine people in intensive care.

SA Health said a man in his 80s who tested positive for the virus has died.

There are 22,524 active cases across the state.

Incumbent Liberal MP James Stevens has endured a swing of 5.89 per cent against him in the eastern suburbs Liberal stronghold, but a strong pre-poll and postal vote showing has carried him over the line.

He currently leads by 1888 votes with the two-party preferred count at just under 51-49 per cent.

Labor was helped by a strong increase in the primary vote for Greens candidate Kate McCusker, who increased the minor party’s vote share by 4.48 per cent.

“Back in February, we began our campaign in this blue-ribbon seat, held by the Liberals since 1972. We were the underdogs and faced an uphill battle from day one,” Baram said.

“Now, Sturt is likely to be one of the most marginal seats in the country. Voters in Sturt, and across our nation in their millions, have sent a clear message – that Scott Morrison and the Liberals have failed to represent them, their families and their communities.

“While I am extremely disappointed that it looks like our campaign in Sturt will fall just short, I know that an Anthony Albanese Labor Government will improve the lives of the people of Sturt through his plan for a better future.

“I congratulate James Stevens on his re-election as the Member for Sturt and wish him all the best for the next term of Parliament.”

The result means Stevens will be the Liberal Party’s only federal MP from metropolitan Adelaide.

The results in all 10 South Australian federal electorates are now certain, with just one seat, Boothby, changing hands from Liberal to Labor.

Much of Sturt overlaps with the state seat of Bragg, which faces a looming by-election following the resignation of long-time MP Vickie Chapman. 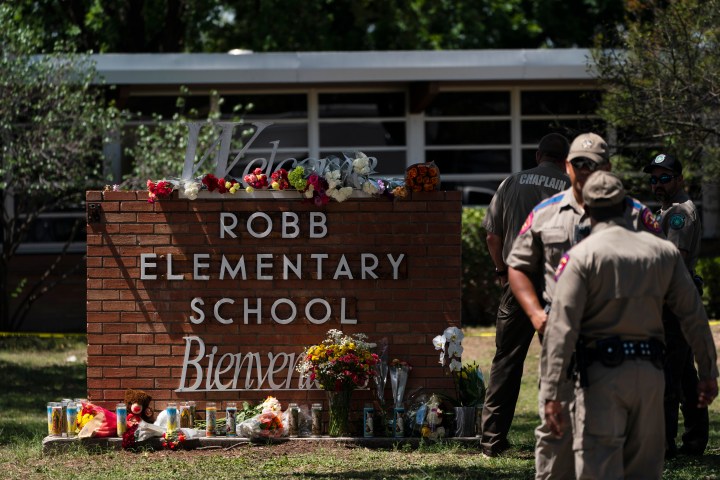 The Texas gunman who murdered 19 children and two teachers barricaded himself inside a fourth-grade classroom with an AR-15 assault-style rifle, the state’s Governor Greg Abbott says, as harrowing details continue to emerge about the shooting including the gunman’s use of social media before the attack.

The gunman, identified as 18-year-old Salvador Ramos, wrote a message on Facebook saying he was going to shoot his grandmother and another one confirming he had done so, Abbott said at a news conference. His grandmother, whom Ramos shot in the face shortly before attacking the school, survived and called police.

Ramos fled the home he shared with his grandmother and crashed his car near Robb Elementary School in Uvalde, Texas. He entered the school through a back door carrying an AR-15 assault-style rifle and wearing tactical gear.

He barricaded himself in a fourth-grade classroom, authorities said, and killed students and teachers before he was fatally shot by a US Border Patrol officer, Abbott said. An additional 17 people suffered non-life-threatening injuries.

Abbott also claimed the gunman posted on social media that he was going to shoot up an elementary school about 15 minutes before his rampage.

He said the posts were made on Facebook, but spokespeople for Facebook’s parent company, Meta Platforms, said they were private messages discovered after the shooting.

The company declined to say who received the messages or which of Meta’s platforms, such as Messenger or Instagram, was used to send them.

The online messages were the only advance warning, Abbott said, adding that Ramos, a high school dropout, did not appear to have any criminal record or history of mental health problems.

Ramos purchased two rifles and 375 rounds of ammunition in March, according to authorities.

The attack, which came 10 days after an avowed white supremacist shot 13 people at a supermarket in a mostly black neighbourhood of Buffalo, has reignited a national debate over US gun laws.

In a sign of the charged political atmosphere, Beto O’Rourke, the Democratic candidate challenging Abbott in a November election, interrupted the news conference to confront Abbott for loosening, rather than restricting, the state’s gun laws.

Texas has some of the country’s most permissive firearm laws.

But new legislation appeared unlikely to pass in Washington. Virtually all Republicans in Congress oppose new gun restrictions and there was no sign the massacre would alter that position.

Commuters, tourism operators and city councillors have been left divided over whether Rundle Road should be closed for three months for the upcoming Illuminate Adelaide festival.

Pathologists are sounding the alarm over the low uptake of COVID-19 vaccine boosters as the national immunisation group suggests a fourth dose for some Australians.

The Royal College of Pathologists of Australasia says third doses are particularly low in Queensland and NSW even as COVID-19 cases rise.

Western Australia has the highest uptake of third doses about 83.2 per cent, while Queensland is the lowest at 62.8 per cent. Nationally, about two-thirds of eligible Australians have received a booster.

South Australia sits in the middle of the pack at 73.1 per cent takeup.

“With winter commencing, it is important for everyone that they are fully up to date with all relevant vaccinations,” RCPA fellow Professor William Rawlinson said.

“The RCPA recently highlighted that it is very likely that we will experience far more influenza cases in Australia this winter. This, combined with the current, rising trend of COVID-19 cases, is likely to put an extraordinary strain on the healthcare system.”

On Wednesday, the Australian Technical Advisory Group on Immunisation expanded eligibility for a second booster to people with health conditions or a disability.

Previously, the fourth dose has only been available to those 65 and over, those in aged or disability care, people who are severely immunocompromised or Indigenous people aged over 50. 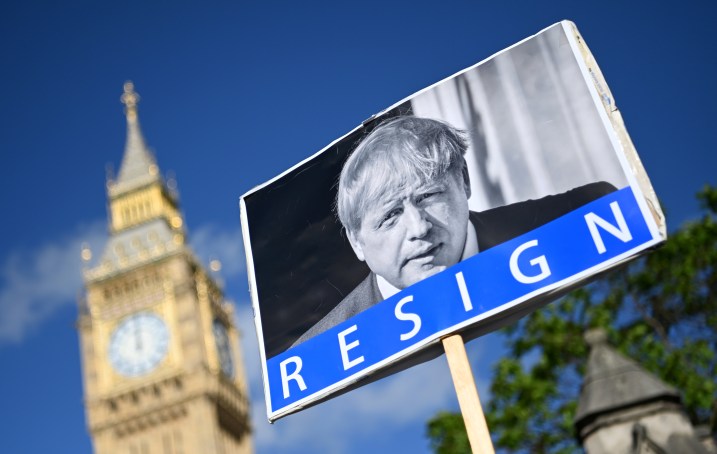 A protester demonstrates against the Downing Street parties, outside parliament in London, Britain, 25 May 2022. Photo: Andy Rain/EPA

Johnson has faced repeated calls to resign from opposition politicians and some in his own party after it was revealed both he and officials had broken the rules that meant people could not socialise outside their households or even, in many cases, attend funerals for loved ones.

“I take full responsibility for everything that took place on my watch,” Johnson told parliament on Wednesday.

The report by senior official Sue Gray did not specifically blame Johnson, but gave graphic details and included photographs from more than a dozen gatherings, some of which he attended.

Johnson was among those fined over a party to celebrate his 56th birthday on June 19, 2020, though Gray said he was unaware of the gathering in advance.

“Many of these events should not have been allowed to happen,” the report said.

“The senior leadership at the centre, both political and official, must bear responsibility for this culture.”

Johnson, who commissioned the report after revelations of boozy Downing Street events while social mixing was all but banned under stringent laws his government had made to curb the virus, said he was appalled by some of the behaviour it had uncovered.

“I … am humbled and I have learned a lesson,” he told parliament to jeers from the opposition benches.

Gray’s interim findings were published in January, but most details were withheld until the end of a separate police inquiry, which concluded last week with 126 fines handed out.

Her full reports included emails and WhatsApp messages which showed many of the gatherings were planned in advance, with discussions on who would bring alcohol.

At one June 2020 event, Gray said there was “excessive alcohol consumption” that led to one person being sick and a fight between two others.

At another, held the night before the funeral for Prince Philip in April 2021, individuals partied into the early hours and damaged a swing.

“Many will be dismayed that behaviour of this kind took place on this scale at the heart of government,” her report said.

“The public have a right to expect the very highest standards of behaviour in such places and clearly what happened fell well short of this.”

China is seeking security arrangements with island nations across the Pacific that resemble the controversial pact struck with Solomon Islands, a move that triggered concern in Australia and its allies including the United States.

The details of the proposed arrangements are contained in pre-written joint communiques that Beijing officials plan to release after meetings with island nations on Monday, documents obtained by AAP show.

The pre-determined outcome of those meetings adds an assertive new layer to China’s expansion into the Pacific, a region that has been largely uncontested since the Allied victory in World War II.

The president of the Federated States of Micronesia, David Panuelo, urged caution in a letter to Pacific leaders. He said that the documents’ contents represented the “single-most game-changing proposed agreement in the Pacific in any of our lifetimes”.

Chinese government representatives in Australia were contacted for comment.

The communiques, obtained by AAP, are separated into two documents.

One is concerned with the outcome of the meeting between Chinese officials and the foreign ministers of 10 Pacific nations invited to talks scheduled for May 30. The second details the five-year process to implement the supposed agreed-upon plan.

Notably, the communiques state there is agreement to strengthen cooperation between China and Pacific nations on “traditional and non-traditional security” to promote regional stability.

“China will hold intermediate and high-level police training for Pacific Island Countries through bilateral and multilateral means,” the document said.

China’s description of the security arrangements resembles how Beijing officials described the pact with Solomon Islands, which they said was based on maintaining social order and safeguarding national security.

That security pact featured heavily in the early stages of the recent Australian election campaign amid allegations the Morrison-led government mishandled Pacific diplomacy.

It is understood that 10 island nations with whom China has diplomatic relations are invited to attend the China-Pacific Island Countries Foreign Ministers’ Meeting on May 30, the second in a new series of annual meetings.

They include Fiji, Solomons, Papua New Guinea, the Federated States of Micronesia, Samoa, Tonga, Kiribati, Vanuatu, Cook Islands and Niue. The meeting is to be held by videolink.