Data released by Wine Australia this month shows the value of Australian wine exports in the 12 months to March 2022 reached $2.05 billion.

This was up $20 million on the $2.03 billion national export figure for the year ending December 2021, which was the lowest 12-month figure since September 2015 when Australian wine exports reached $1.96 billion.

It is the first time year-on-year Australian export figures have risen since they reached a record $2.99 billion in September 2020, at the height of the China wine boom when exports to the Asian giant alone topped $1.2 billion.

But Chinese tariffs on bottled Australian wine of more than 200 per cent imposed in November 2020 have since reduced exports to China to almost zero.

Only Canada recorded a slight fall in sales.

Smedley said SA wine companies had been able to begin visiting export markets for the first time since early 2020 but some markets were still closed to visitors.

“It’s certainly showing signs of improvement, particularly in those top 10 markets and that’s a very positive aspect but we do need to recognise that it is by no means compensating for the loss of the China market,” he said.

“There are still some Asian markets that are closed and are saying they will not accept visitation until the second half of 2022 but it’s certainly better than it was three months ago.”

South Australia typically produces about half of Australia’s annual production and accounts for almost 70 per cent of Australian wine exports by value.

However, the national figures show five of the 10 markets had falls in exports for the 12 months, including Australia’s two largest overseas markets the UK and US. 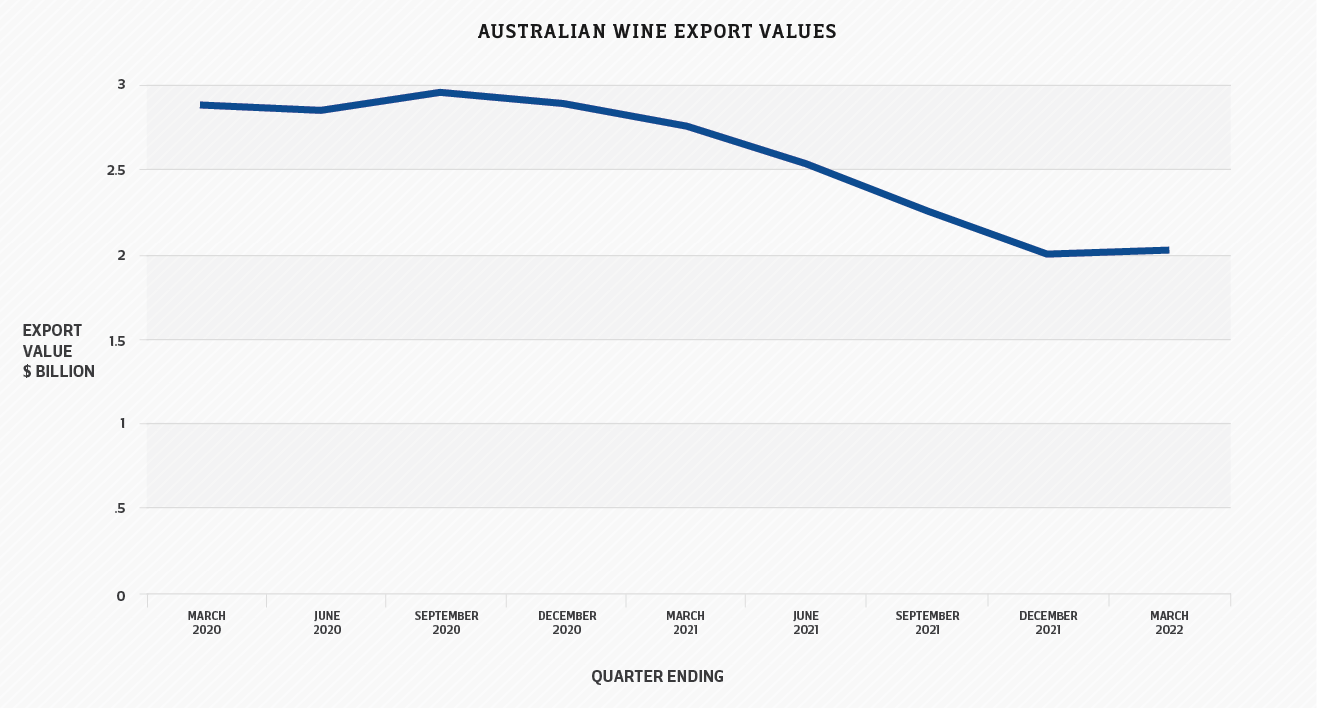 Wine Australia General Manager Corporate Affairs and Regulation Rachel Triggs said while the increase in overall value excluding mainland China was strong at $129 million, it did not come close to offsetting the recent declines in exports to mainland China.

“Over the past 15 months, Australian wine exporters have had to navigate through an exceptionally challenging operating environment, largely led by the imposition of high deposit tariffs on bottled Australian wine imported to mainland China, the continuing impact of the global freight crisis, and a counter-swing in some markets after COVID-19 related stockpiling in 2020,” Triggs said.

“What the latest Export Report shows is that efforts to diversify and intensify markets is slowly reaping rewards for Australian wine exporters.

“With the easing of COVID-19 restrictions, we’re seeing the on-premise trade open up in established markets and that has had an impact as demand stabilises.”

Outside of export figures, the wine industry in South Australia is facing challenges on a number of fronts at the moment including rising input costs for items such as gas and fertiliser; major shipping delays that have caused exporting problems, and; an oversupply of grapes that have caused prices to fall and contracts to be cancelled.

Smedley said the quality of the recent 2022 vintage had been described as “quite spectacular” with very good reports coming out of Coonawarra for Cabernet Sauvignon.

“We are certainly seeing a surplus of red wine grapes this vintage and we did see some decline in pricing for red grapes whereas with whites we saw some price stabilisation or improvement in some cases so that is a positive,” he said.

“But generally speaking, red grape prices have declined and some red grapes were not needed.

“We had a very high-volume vintage in 2021 and it’s reasonable to suggest that we are potentially looking at a yield in 2022 that is more in line with the 10-year average or a little bit below that, which is probably a good thing.”

Wine Australia’s annual grape and wine sector report for the 2020–21 financial year, released in December, confirmed that the national wine inventory levels of 2.1 billion litres at the end of June 2021 were the highest since 2005–06.

Smedley said there had been instances this year where growers had left uncontracted grapes to fall to the ground or made their own wine with excess fruit in the hope the wine could be on-sold at a later date.

He said this had generally not happened in South Australia for more than a decade when grapes were left to rot and vineyards mothballed in the wake of the GFC and the high value of the Australian dollar.

“There would be pain experienced in most regions in the state,” he said.

“The reality of what happened in terms of the timing with China is that leading into the 2022 vintage many companies had made their decisions well ahead of that.

“The inventory levels are probably still a bit high so the challenge ahead of us now is to sell what we’ve made and get some of that product moving.

“The realisation now is that placing that wine into other markets is going to take a lot longer – probably many years – so we are probably looking at some more challenging time for at least the 2023 vintage for grape growers and wineries.”

A global shortage of shipping containers and the availability of space on boats for exports and imports is creating problems for many industries, including wine. 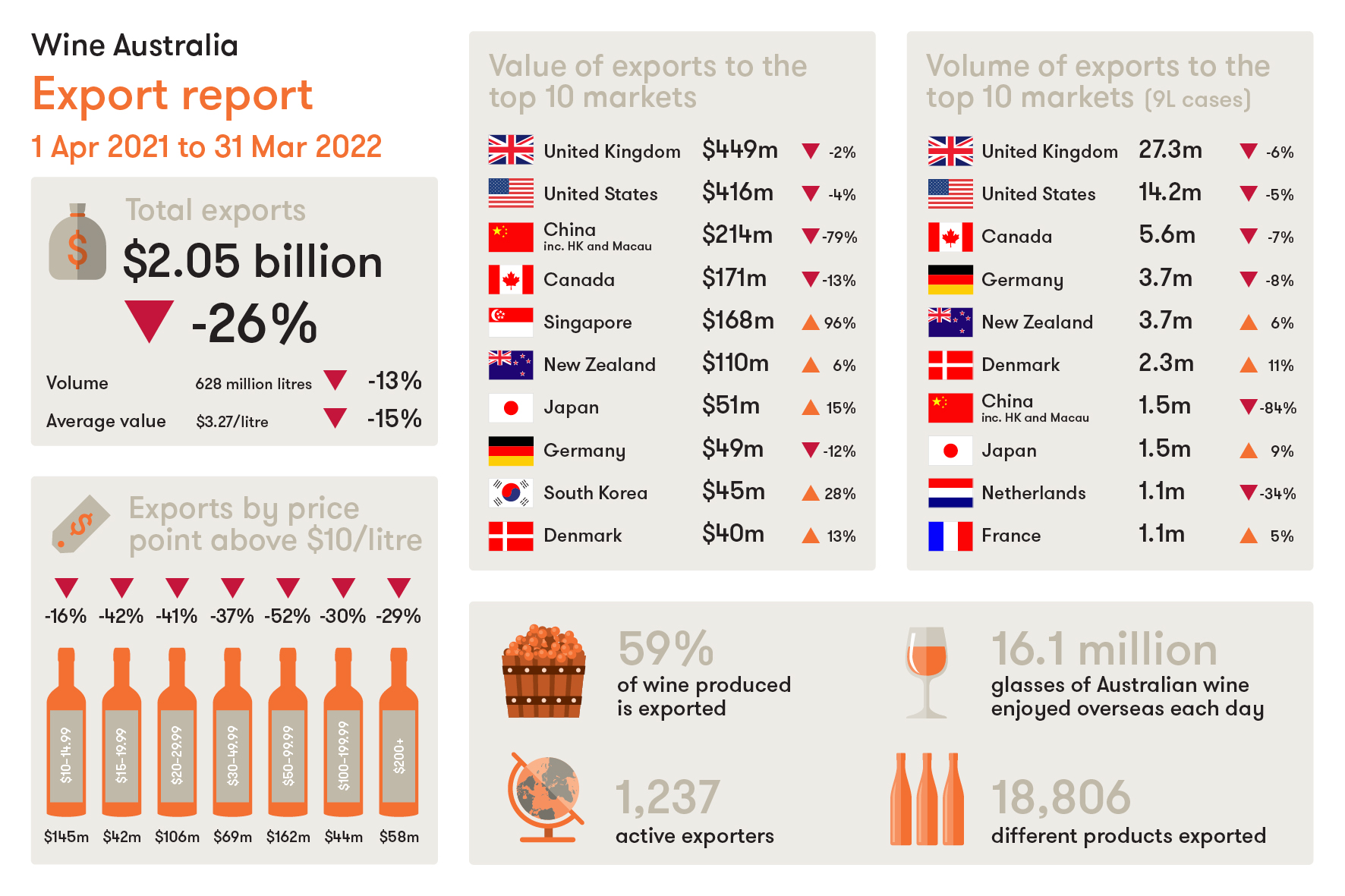 Smedley said in some instances ships were bypassing Adelaide, disrupting the supply chain for imports and exports.

He said wine companies were now forced to order inputs such as feritiliser, oak barrels, steel tanks and additives six to 12 months ahead of time, which also had cashflow implications.

“All of that now needs to be thought about in a very different way rather than for simply just in time use.

“You now need to be thinking well ahead to make sure you’ve got all of the inputs you might need for any part of your business, particularly if you are sourcing them from overseas.

“Particularly the small to medium exporters have indicated it’s got slightly worse in terms of being able to secure a shipping passage to various destinations and the other message from them is we’re unlikely to see a change for 12 to 24 months.”

The rising costs of energy such as gas and diesel are also adding to the costs of wine and grape production.

“There are still many headwinds and there seem to be an increasing number of challenges … there are a lot of cost pressures coming through,” Smedley said.

Prime Minister Scott Morrison last week announced an additional $4 million in funding for small and medium wine producers if his Coalition government was returned at this weekend’s election.

The funding is in the form of grants of up to $25,000 to help wine producers promote their products in international markets.

It will extend the Wine Exports Grants program, administered by Wine Australia, over the next four years. So far, more than 250 grants have been provided to more than 100 wineries in the first two rounds.

Australian wine giant Treasury Wine Estates last week also unveiled its new $165 million production facility in the Barossa, which it claims to be the “largest premium winemaking site in the Southern Hemisphere”.

Smedley said the launch was a much-needed boost in a challenging time for the industry.

“It’s a positive – a commitment by the largest wine company in Australia to a state of the art production facility says a lot about our future, we’ve just got to get to that future.”