The Public Health Act amendments sailed through parliament’s lower house last week, but are set to face a longer debate in the upper house where the Liberal opposition has flagged it will be “reserving [its] right to further consider matters and raise them”.

The amendments are designed to replace the emergency management declaration, which has been in place since March 2020 and is currently used to impose seven-day quarantine for COVID-positive patients, mask mandates in high-risk settings and vaccination mandates for healthcare workers.

SA Health and SA Police helped draft the amendments to the public health laws to ensure that as the state emerges from a state of emergency, the COVID-19 rules remain in place.

Premier Peter Malinauskas has previously promised that the emergency management declaration would not be extended beyond the end of June, meaning the parliament has just over one month to pass the amendments.

But the SA Law Society has described the potential scope of the amendments as “concerningly opaque” and warns careful consideration must be given to ensure people’s basic rights and freedoms are protected.

In a letter sent to the opposition’s health spokesperson Ashton Hurn, Law Society president Justin Stewart-Rattray said the amendments grant the Governor “wide-ranging powers” to enforce directions at any time.

“Enshrining such extraordinary powers in legislation permanently must be carefully considered and accompanied by some guarantee of proportionality with respect to ensuring an individual’s basic rights and freedoms, when such powers are exercised,” he wrote.

“We highlight the permanent nature of the proposed arrangement, which will give the Governor discretion over such matters once the current state of emergency has lapsed.”

The amendments would allow the Governor to issue directions impacting people who test positive for COVID-19 or who are deemed close contacts.

It states close contacts “may be defined from time to time in the directions”.

Stewart-Rattray described that definition as “open-ended”.

“By way of example, we note the various changes to the definition of ‘close contact’ over the preceding year, which less than six months ago included those who had simply attended a listed exposure site at a particular time,” he wrote.

“The open-ended definition is more concerning when read in conjunction with the apparent breadth of such directions… which appear to provide significant scope to any potential directions the Governor may make.”

Under the proposed legislation, the Governor would have the power to “require or allow a person or a class of persons to act in contravention of another law of the state”.

The Governor would also have the power to issue directions that may “affect the lawful rights or obligations of any person or class of persons”.

He said those powers would be “substantially reduced” if the Public Health Act amendments pass parliament.

“The ability to issue new directions will be limited to people who are positive for COVID-19 and close contacts. It is necessary for flexibility in the legislation for the definition of close contacts to change as it has changed significantly over the past year,” he said.

“The legislation is not permanent, it will be temporary – it is only proposed to be in operation for six months on the advice of the Chief Public Health Officer Professor Spurrier.

“We look forward to consideration by the Legislative Council of the bill this week, so that it can be considered before the expiry of the current extension to the Emergency Management Declaration.” 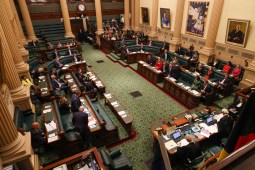 New COVID laws a missed opportunity to lock in accountability

The Law Society has previously called for a “full review” of the Emergency Management Act – the legislation which is used to invoke an emergency management declaration.

It wants the review to consider how the emergency management laws could be changed to respond to pandemics and other prolonged emergency situations.