The Malinauskas Government has moved to introduce a suite of changes to child sex offender sentencing in a bid to increase maximum jail terms for convicted offenders.

The changes, set to be tabled in parliament today, would see the maximum penalty for unlawful sexual intercourse with a child aged 14-16 increase from 10 years jail to 15.

The same maximu penalty upgrade would apply to those convicted of:

Attorney General Kyam Maher said he wanted South Australia to be “the toughest in the nation when it comes to protecting and punishing predators”.

“Labor has listened to survivors of child sex abuse, their families and the wider public, and we are well aware of the need for tougher action on the monsters who prey on our most vulnerable,” he said in a statement.

“These predators inflict lifelong and devastating consequences on their victims and the penalties imposed must reflect that.”

Labor said before the election it would move to amend the Superannuation Funds Management Corporation of South Australia Act to mandate that Funds SA divests all its investments from Russian assets.

“We cannot continue to invest South Australians’ money in Russia given their disgraceful conduct in Ukraine, which we have all watched in horror,” Premier Peter Malinauskas said on Twitter today.

The government-owned corporation has more than $43 billion in total assets under management.

The Malinauskas Government’s proposed amendments to the Public Health Act have passed the House of Assembly, marking the first step in shifting South Australia’s pandemic management away from the state’s major emergency declaration.

The State Government flagged yesterday it would table amendments to the Public Health Act to allow COVID-19 restrictions – including seven-day quarantine for COVID-positive patients, mask mandates in high-risk settings and vaccination mandates for healthcare workers – to remain in place after South Australia’s major emergency declaration is revoked.

Those amendments sailed through the Lower House on Wednesday afternoon with the support of the Liberal Opposition.

The Government Bill is now set to face a longer debate in the Upper House, with the Opposition flagging on Wednesday it would be “reserving our right to further consider matters and raise them in the Legislative Council”.

The declaration has been in place since March 2020 and extended 28 times, but Premier Peter Malinauskas has set a June 30 deadline for its removal. The declaration is next due to expire again at the end of May. 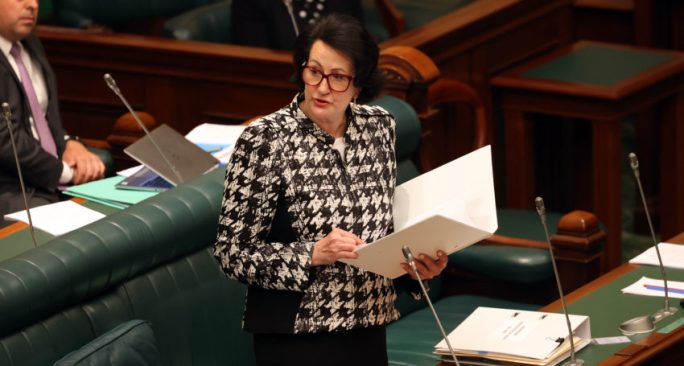 Vickie Chapman has condemned the “witch-hunt” parliamentary inquiry that found she had conflicts of interest and breached the ministerial code of conduct – but whose findings were roundly rejected in a subsequent report by the state Ombudsman.

Addressing parliament yesterday on the matter for the first time, the former Deputy Premier noted the findings of the two reports into her decision to veto a timber port on her native Kangaroo Island “could not be more different”, thanking Ombudsman Wayne Lines for his “comprehensive, thorough and independent investigation over the past six months”.

“His findings were clear: no conflict of interest, no breach of the Ministerial Code of Conduct and no maladministration,” she said.

“I am particularly pleased that the hardworking public servants [referred for investigation] have been cleared as public officers.

She noted the Ombudsman “allowed me to be legally represented” – and criticised the select committee for failing to offer legal representation, despite having its own counsel assisting.

“No one in this chamber will be surprised to hear that I consider the select committee of last year to have been nothing more than a witch-hunt and that it had all the features of a kangaroo court,” the former Attorney-General said.

But she offered suggestions for improving the operations of future inquiries to ensure they “actually enhance and protect the interests of parliament and its reputation”.

These included allowing established committees to determine the time frame necessary to conduct their inquiries, noting last year’s process had little more than a month to conduct a spate of interviews and report findings.

“Quite frankly, it is farcical to expect that any inquiry body, particularly given the extent of witnesses and documents to be considered, have 37 days for completing this task, in particular giving procedural fairness to all concerned,” she said.

“This is no excuse for them failing to give me procedural fairness, but then it is my view that this inquiry was and remains motivated by the political objectives of at least three of the members, including the Chair [Labor MP Andrea Michaels].”

She said the finding of an actual conflict of interest was predicated on a contract between the port’s proponents and independent forestry owners that the Ombudsman determined “did not exist”.

“I do not for one minute consider it is any excuse that this was as a result of having an unreasonable restriction on time … it is just plain incompetence at best and, at worst, mischievous,” she told parliament.

However, she said appointing a counsel to assist future inquiries “may be [of] considerable value to the parliament”, but added it was “startling [to deny] legal representation for any witnesses who elected to have the same”.

“So the question of legal representation, I suggest, does need to be fully explored and I would urge the parliament to do so,” she said.

“Failing to do so will again put the parliament at risk of criticism. We all have an obligation to ensure that the reputation of the parliament is not diminished and, most importantly, that it retains the confidence of the people of South Australia for whom it exists to serve.”

Labor has moved in parliament to fulfil its election promise of establishing a Cross Border Commissioner to provide advice on issues specific to the state’s border communities.

The Commissioner, which will cost around $2 million to establish with an office based in Mount Gambier, was a key regional election promise floated by Labor in late 2021 amidst the ongoing impact of the state’s border restrictions on cross-border communities.

The position is based on similar commissioner roles established in Victoria and New South Wales.

Labor says the South Australian commissioner will be asked to “identify issues, broker solutions and provide advice on matters impacting border communities”, with a goal to “[make] it easier to do business across our borders” and address “barriers to education, health and other services”.

Minister for Primary Industries and Regional Development Clare Scriven said the Cross Border Commissioner Bill, which she tabled in the Upper House on Wednesday, will require the person appointed to the role to have a “detailed” understanding of border communities and lived experience within a border region.

“There is a long history of matters that cross-border communities and businesses are required to navigate,” she said in a statement.

“While the need for a Commissioner was highlighted during COVID-19 border closures, many of the issues pre-date COVID by many years.

“The Cross-Border Commissioner will provide a new mechanism to address these issues and facilitate collaboration and engagement with residents, businesses and community organisations as well as all tiers of government.”

Also in Parliament, the Greens have launched a renewed push to put the Adelaide Park Lands on the State Heritage List.

The same Bill passed through the Upper House with bipartisan support in February this year before the dissolution of parliament for the state election.

Prime Minister Scott Morrison will tout a new small business pledge today while Anthony Albanese will make his pitch to industry leaders as the focus of the federal campaign turns to the leaders’ economic credentials.

Morrison said the coalition would look to create 400,000 new small businesses during the next five years, should the government be re-elected.

The government also announced it would spend $17.9 million on the Business Energy Advice Program to help small businesses be more efficient, in an attempt to cut back on power bills.

“We have the track record to set the conditions that help businesses, and our ambitious pledge will see 400,000 more join the economy,” Morrison said.

The Labor leader will address the Australian Chamber of Commerce and Industry in Sydney.

Albanese will pitch the need for economic reform.

“A country cannot keep drawing from an old well, because the well eventually dries out,” he will say.

“Australia needs a new playbook to seize the future.”

Among the measures proposed by Albanese is universal childcare, which he said would help increase workforce participation.

People with disabilities are being ignored and left behind as the nation recovers from the COVID-19 pandemic, advocates say.

Disability support groups have called on the incoming government to establish a COVID-19 recovery plan for people with special needs, as the virus continues to surge in the community.

“People with an intellectual disability are at high risk from COVID-19, and many have missed out on essential support during the pandemic,” Inclusion Australia’s CEO Catherine McAlpine said ahead of the federal election.

“We want all disability support providers to ensure that people with disability can access support during an emergency. People with an intellectual disability must also have equal access to healthcare if they get COVID-19, as well as vaccines.”

More than two years after the pandemic first hit, people with disabilities are still living in fear and isolation after public health measures were lifted without a specific plan to protect them.

“The pandemic isn’t over for our community, and we need a Recovery Plan to make sure people with disability are not left behind,” Golding said.

“Migrant and refugee people with disability need specific information, services and support to keep our community safe from COVID-19.”

A proposed plan by disability organisations cites the need for increased physical and mental health support, continued access to remote learning and work and support for people with long COVID.

The US Federal Reserve has intensified its fight against the highest inflation in 40 years by raising its benchmark short-term interest rate by a half-percentage point – its most aggressive move since 2000 – and signalling further large rate hikes to come.

The increase in the Fed’s key rate raised it to a range of 0.75 per cent to 1 per cent, the highest point since the pandemic struck two years ago.

The Fed also announced that it will start reducing its huge $US9 trillion ($A13 trillion) balance sheet, which consists mainly of Treasury and mortgage bonds.

Those holdings more than doubled after the pandemic recession hit as the Fed bought trillions in bonds to try to hold down long-term borrowing rates.

Reducing the Fed’s holdings will have the effect of further raising loan costs throughout the economy.

The Fed’s credit tightening will likely mean higher loan rates for many US consumers and businesses over time, including for mortgages, credit cards and car loans.

Speaking at a news conference on Wednesday, Chair Jerome Powell made clear that further large rate hikes are coming.

“There is a broad sense on the committee,” he said, referring to the Fed, “that additional (half-point) increases should be on the table in the next couple of meetings.”

But Powell also sought to downplay any speculation that the Fed might be considering a rate hike as high as three-quarters of a percentage point.

“A 75-basis-point hike is not something that the committee is actively considering,” he said – a remark that appeared to cause US stock indexes to rise.

It comes just after the Reserve Bank of Australia raised interest rates for the first time in almost 12 years on Tuesday, with Australia’s cash rate increasing from 0.1 to 0.35 per cent.