Detainee advocacy group Justice Action claims South Australia is the only jurisdiction in the country that has refused to distribute copies of its pre-election prisoner newspaper JUST US.

The four-page publication, which is intended for jail inmates and those detained in hospitals, includes submissions from political parties outlining their vision for the country and what they would do to improve detainee legal access.

“Politicians make laws in parliament, but they get that power through the democratic right to vote,” the publication states.

“With the upcoming federal election, you are constitutionally entitled to have information that could help you decide how you will vote.”

JUST US is only published in the lead up to state and federal elections. As well as providing information about this month’s federal election, the latest edition also includes articles on forced medication, the COVID-19 pandemic and statements from corrective services commissioners.

About 40,000 copies were distributed to prisons across the country on April 20, but the publication has been banned in South Australian prisons since it started in 2004.

Justice Action has engaged a senior counsel from law firm Allens to write to Department for Correctional Services chief executive David Brown, giving him until the end of today to reverse the ban before it files proceedings in the Supreme Court.

“This is the only newspaper that offers direct information from the political parties to them [prisoners]. It’s also the only way that they can respond to political parties, as they are entitled to as a citizen who is able to vote,” Justice Action coordinator Brett Collins told InDaily.

“It’s really amazing that South Australia is standing by itself and taking such an unreasonable position.

“It’s quite clear that it is not going to be a security breach because all of the other states and territories are quite happy with it.

“It’s just an attempt to isolate them [South Australian prisoners] further from the community.” 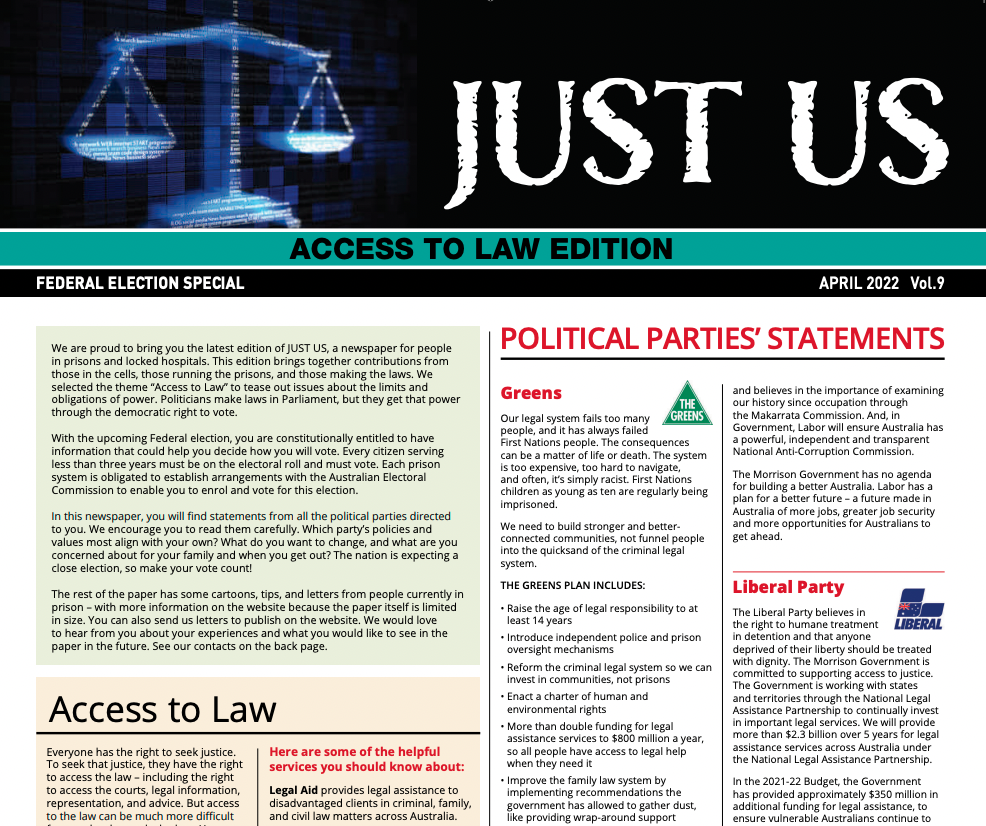 An excerpt from the JUST US April edition. Image: Justice Action

A spokesperson from the Department for Correctional Services did not respond to questions from InDaily asking why JUST US was banned in South Australian prisons.

They said the department was “committed to ensuring that all eligible prisoners are able to vote in the upcoming federal election”, with voting facilitated in a “fair, neutral and unbiased manner”.

“The Department will respond to the law firm representing Justice Action accordingly,” they said.

JUST US was twice rejected by Corrective Services New South Wales in 2004 and 2007, before Justice Action won a Supreme Court bid in 2011 to allow its distribution.

In 2014, the Victorian Government was also forced to reverse its ban, after the Australian Human Rights Law Centre prepared a court challenge.

Collins said the past challenges made him confident that South Australia’s Correctional Services Department would also back down, should the case proceed to the Supreme Court.

“It’s time to hold South Australia to account and we want to make sure they do what’s fair and right under their legal obligations,” he said.

“This is about upholding prisoners’ constitutional entitlements.”

It comes after SA Ombudsman Wayne Lines in 2016 ruled against a Department for Correctional Services decision to prohibit correspondence between South Australian prisoners and Justice Action.

In his report, Lines wrote there was “no authority or reasonable basis for the department to conclude that South Australian prisoners should be prevented from corresponding with Justice Action”.

“In my view, it is not reasonable for the department to impose a blanket ban on communications with Justice Action given that it is predominantly an advocacy organisation,” he wrote.

Prisoners are only allowed to vote in federal elections if they are serving a full-time sentence of less than three years.