The Voluntary Assisted Dying Act 2021 passed state parliament in a historic vote in June, paving the way for people aged 18 and over who have been diagnosed with an incurable illness to access legal euthanasia.

After the vote, the Marshall Government indicated that the laws would come into effect on March 29, 2023, with former Health Minister Stephen Wade previously telling parliament that it was important to “take the time you need to plan and implement such an important initiative”.

But advocates warned the 21-month delay was unnecessary and would prolong the suffering of South Australians with terminal illness.

Maher, who authored the legislation and pushed for its passage through parliament while in opposition, told InDaily this morning that he and Health Minister Chris Picton were “both keen to see if there is any way that this can be implemented more quickly”.

It is quite urgent – people are suffering at this time now

He said South Australia was on track to the be the slowest state in the country to implement voluntary assisted dying laws, with progress “stagnated for many, many months”.

“If there’s any way given the very slow start we’ve had to bring that forward, we’re keen to make sure South Australians can use the laws.”

Voluntary Assisted Dying SA (VADSA) wants the implementation date brought forward to December this year to ensure a maximum of 18 months between the passage of the legislation through parliament and commencement, similar to other states.

Asked if he would commit to implementing the laws by the end of this year, Maher said: “I know Minister Picton and his department are looking to see if there’s any way they can be brought forward”.

“Given the very slow start that there was to implementing this, if it is possible, I know they’re looking at bringing them forward as much as possible,” he said.

“I know advocates are very keen to bring it in this year and I know Minister Picton is looking to see what can be done.

“I’ve made it clear to him that anything the Attorney-General’s Department can do, with advice and help from the legal side, we will provide as well.” 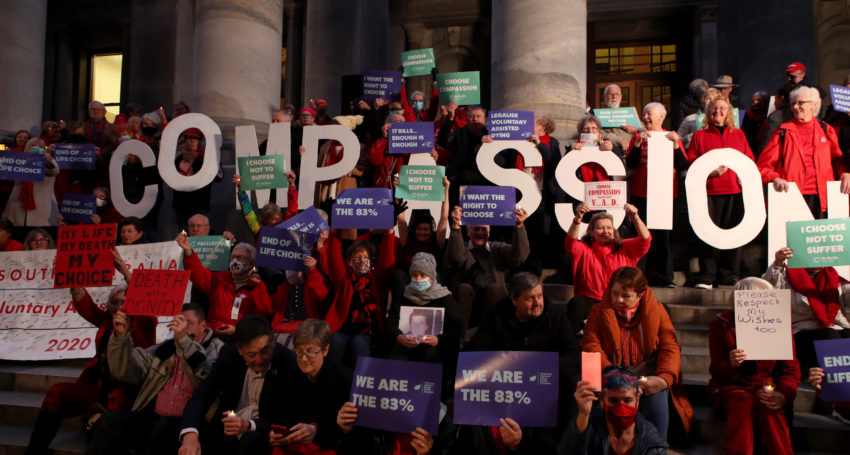 Supporters of a Voluntary Assisted Dying bill during a candle light rally on the steps of Parliament House last May. Photo: Kelly Barnes/AAP

She said other states had shared information and resources about how they implemented their voluntary assisted dying laws and South Australia “didn’t need to reinvent the wheel”.

“In the past fortnight I’ve had eight calls– four of those were distress calls – from people wanting to access the Act and other people just wanting to know for peace of mind as to when it would commence,” she said.

“It is quite urgent – people are suffering at this time now, so it does need to be implemented as soon as possible.

“Without the law, people were effectively forced to suffer or they were forced in a position to take their own lives to escape that suffering and that is the situation while this implementation is going on.”

Govt in no rush to allow voluntary euthanasia despite legislation

Coombe, who sits on the government-appointed taskforce to guide the implementation of the legislation, said it had met “probably around about eight or nine times”, with a further meeting scheduled this afternoon.

“There’s certainly some good progress being made, but we can’t see how the timeframe couldn’t be shortened,” she said.

“Certainly, the government thinks so too.”

The Australian Medical Association predicts about 100 South Australians will choose to access voluntary assisted dying each year once the legislation comes into effect.

The laws passed parliament after a three-decade long battle by voluntary euthanasia campaigners and are modelled on Victorian legislation, which includes more than 70 safeguards.