The former Deputy Premier – whose ongoing position in parliament is under a cloud after Speaker Dan Cregan revealed Crown Law advice that she had effectively resigned – arrived at Parliament House this morning to be sworn in by chief justice Chris Kourakis. 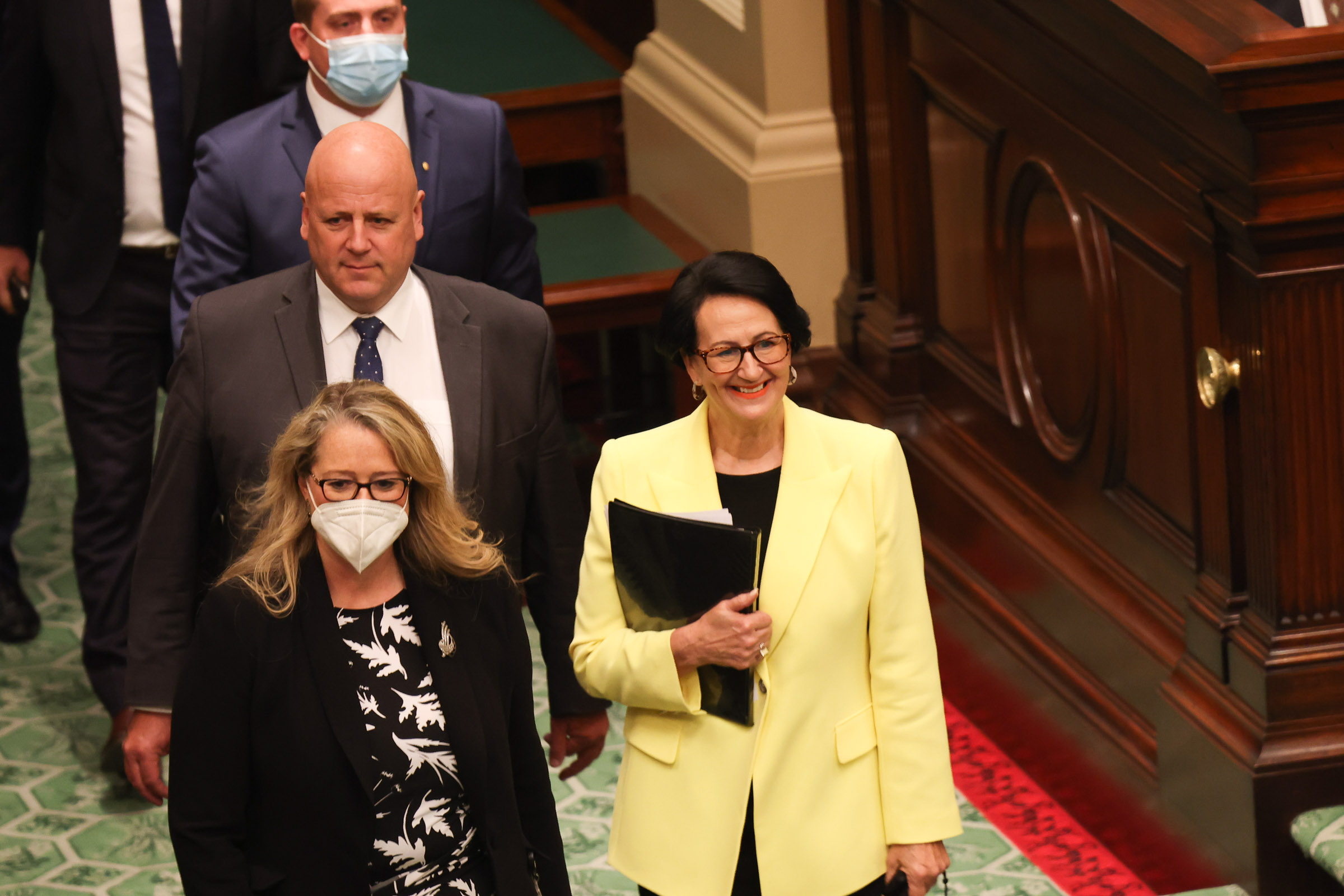 However, she then vacated the chamber before Cregan was reinstalled as Speaker and did not join the parliamentary delegation that crossed North Terrace to greet Governor Frances Adamson.

Chapman’s presence overshadowed a low-key return to the Opposition benches for the Liberal Party, whose new leader David Speirs is sidelined with COVID – along with his deputy John Gardner, frontbenchers Ashton Hurn and Tim Whetstone and leadership candidate Nick McBride, as well as former Health Minister Stephen Wade in the Upper House.

Cregan could still call Chapman to account today, after yesterday flagging that if she attended parliament the issue of her ongoing status as an MP “may be addressed at that time”. 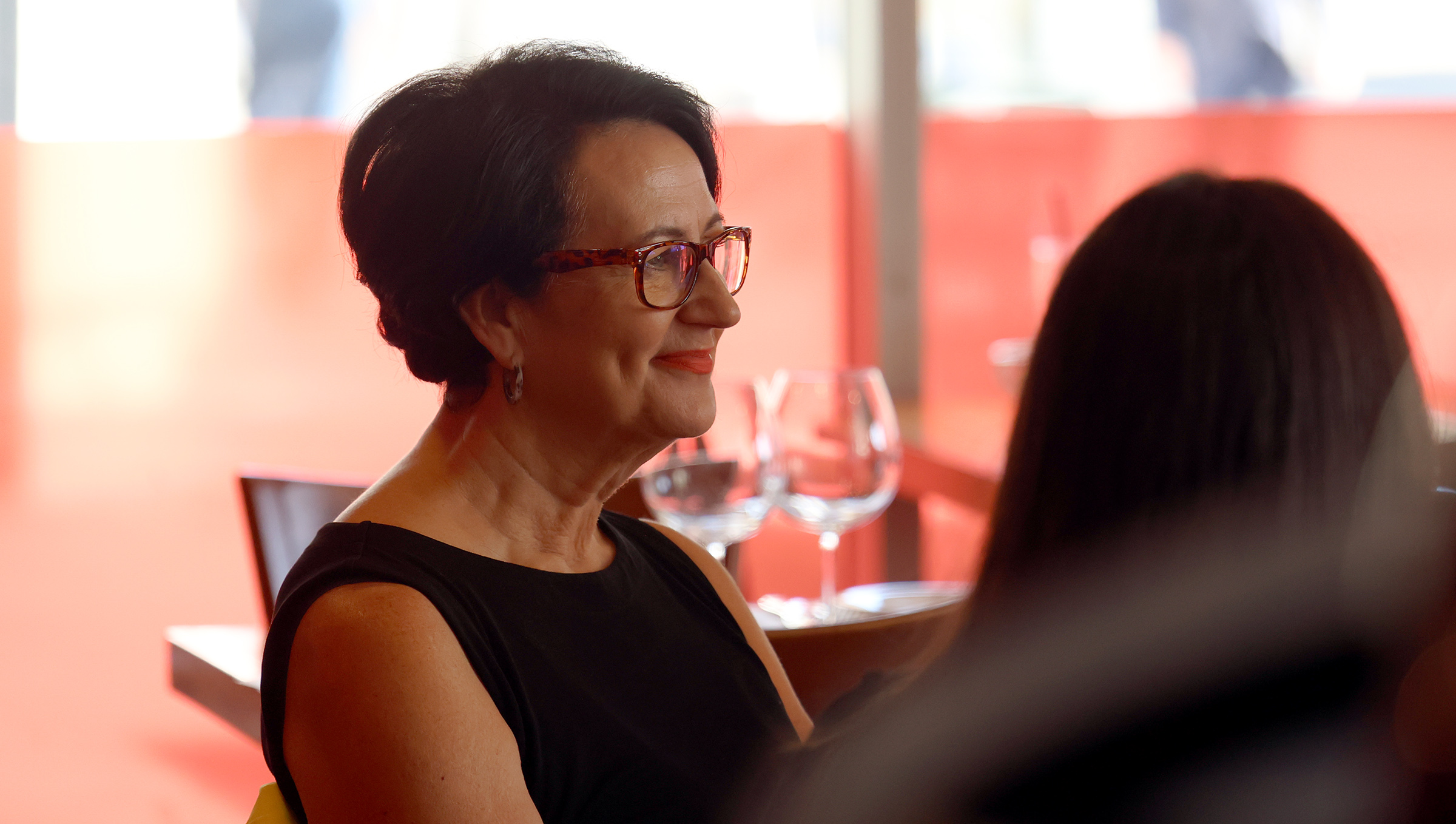 Instead of Government House, Chapman visited Parlamento after being sworn in. Photo: Tony Lewis / InDaily

But it was in the Legislative Council that the highest drama erupted this morning, with Labor announcing its shock endorsement of Liberal veteran Terry Stephens as Upper House president – a role that traditionally falls to a government member.

The move follows the ALP claiming a surprise ninth seat in the Upper House at the March election – with the result confirmed last week – and means the Government will retain all nine votes on the council floor.

That will mean they only need two more votes to pass legislation and will only need to deal with either the Greens or SA Best to do so on any given issue.

It immediately limits the influence of newly-elected One Nation MLC Sarah Game, but also curtails the rest of the crossbench as a voting bloc – and gives the Opposition almost no ability to block legislation, without the assent of the entire crossbench.

Stephens was president briefly during the Marshall Government – but was forced to stand aside amid an ICAC investigation into his use of the country members’ accommodation allowance – only to be later cleared when the DPP opted not to prosecute.

He recently expressed an interest in being the Liberals’ leader in the Legislative Council, but deferred to the elevation of Right-faction colleague Nicola Centofanti instead.

In a moment of drama as Stephens’ nomination was announced – and accepted – SA Best MLC Connie Bonaros stood to nominate a parade of Labor MLCs for the presidency instead – but each, in turn, declined the nomination.

She said afterwards: “It beggars belief.”

“What transpired today is not good for the people of South Australia, and it’s not good for democracy, accountability and transparency –  everything the Upper House stands for,” she said.

“This isn’t personal – I have nothing against Terry Stephens. He’s a decent bloke and was a good, fair president in the past.

“But it beggars belief the Liberals would act as foolishly as they did – putting their own vested internal interests ahead of democracy.

“Given their numbers, it absolutely astounds me they would even contemplate removing one of their crucial votes from the Chamber – let alone action it… and therein lies the difference between a disciplined and focussed Labor Party and the ruinous vested interests of the Liberal Party.

“Nothing is clearer than the factional war that has ripped apart the Liberals for more than 50 years continues to rage unabated.”

A spokesman for Liberal leader David Speirs said: “We did not oppose Terry Stephens’ nomination as president of the Upper House.”

Stephens himself told InDaily via SMS that he was “unsure what would happen” but that “I had the blessing of my Leader in both Houses”.

But sources have told InDaily that most of Stephens’ Liberal parliamentary colleagues only found out about the move around half an hour before he was installed this morning.

“It’s utterly stupid,” one senior Liberal said of the move.

“Labor now has nine votes – all they need is two to completely dominate the legislative process.”

“It’s a mistake that will cost us for four years,” one said.

“The Opposition just got weaker.”