The number of COVID-positive hospital patients in South Australia has increased by 28 overnight, as the state today recorded 3143 new cases.

There are now 257 people with COVID-19 in hospital – up from 229 yesterday – including 15 people in intensive care and two requiring a ventilator.

Today’s 3143 new cases is a slight drop from the 3070 reported yesterday, following a 6.7 per cent decrease in PCR testing.

In its update this afternoon, SA Health reported three people had died after testing COVID-positive, including two women in their 70s and a woman in her 80s.

All up, there are 24,803 active cases in the state, meaning more people have contracted the virus than recovered over the past 24 hours.

UK shipping giant BP Shipping Ltd has agreed to pay a $48,000 fine over a jet fuel leak at Largs Bay.

The company will also pay about $28,000 in legal and technical expenses over the incident in February 2020.

Its ship British Engineer was moored at a terminal at Largs Bay transferring Jet A-1 fuel to the onshore facility.

A pressurised liquid chemical hose failed at the discharge point, sending an unknown quantity of fuel onto the deck of the vessel and into the Port River.

SA Environment Protection Authority Chief Executive Tony Circelli said an assessment of the incident by an independent environmental consultant had supported complaints made by 16 people.

“After an investigation the EPA was satisfied that BP Shipping Limited had caused material environmental harm through the odours from the spilled fuel affecting the community,” Circelli said.

The EPA negotiated a civil penalty as an alternative to criminal prosecution based on BP Shipping’s submissions of its good compliance record, having had no previous enforcement action by the EPA in South Australia.

The company took immediate action to clean up the spill and later ceased the use of flexible hoses for cargo operations.

Back to school as SA COVID cases trend downwards

The state’s school system was in focus at the height of South Australia’s Omicron wave in late March and early April, with several schools forced to close due to classroom outbreaks and teacher shortages.

The term started with students from years 2-6 and years 9-11 learning from home for the first two weeks while the rest of the cohort was allowed on campus.

The Education Department had by late March called upon most of its relief teaching reserves and was struggling to fill teaching gaps in country schools due to COVID-19 – prompting calls for an early end to the school term.

“Children being forced to learn at home has a big impact on their learning while putting undue pressure on families and schools,” he said in a statement this morning.

“Minimising that disruption for students, parents and teachers is a top priority.”

Boyer highlighted Labor’s push to finish “long-delayed” ventilation work at 652 schools and the installation of an extra 1000 air purifiers across the state.

Vaccination hubs are also set to be established in at least 40 schools this term to target children aged 5-11 for the COVID jab.

The Emergency Management Council determined last week that Masks will be required for all students in years 7-12 for the first four weeks of term one.

All adults and visitors to schools will also be required to wear masks except when it impacts their ability to teach.

The number of people in hospital also dropped on Sunday from 250 to 229.

A standoff between Speaker Dan Cregan and former Deputy Premier Vickie Chapman over the timing of her resignation looks set to dominate the first sitting week of the new South Australian parliament.

Chapman, who announced she would be resigning from politics just hours after David Speirs won the Liberal Party leadership on April 19, intends to vacate her blue-ribbon seat of Bragg on May 31.

But Cregan, a former Liberal MP now re-installed as independent speaker of the Lower House, sought to issue Chapman her marching orders over the weekend.

He argued Section 30 of the South Australian Constitution does not allow a sitting member to choose when they will resign from parliament if they have formally notified the speaker of their intention to resign.

But Chapman hit back on Sunday, saying she had not formally resigned but only signalled her intention to resign.

“[On Saturday night] I received an emailed letter from the Speaker … I confirm I have given notice of my intention to resign,” she said.

“I have not resigned.

“I will continue my correspondence on this matter with the Speaker.”

The standoff looks set to come to a head when parliament returns on Tuesday for its first sitting week since Labor’s rout at the March 19 state election.

Labor on Sunday renewed its call for any other member of the Liberal Party who wished to resign to make their intentions clear to prevent repeat byelections.

The Liberals will be without Opposition leader Speirs and newly-elected Deputy Leader John Gardner when parliament returns, after both leaders tested positive for COVID-19. 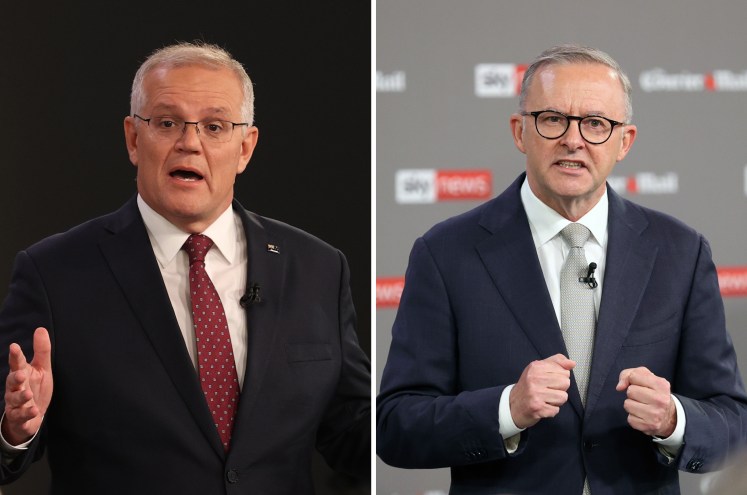 An extra 50,000 older Australians will get access to the Commonwealth Seniors Health Card if the Morrison government is re-elected, as two new polls show Labor continues to lead on the two-party preferred vote.

A day after Labor leader Anthony Albanese accused him of neglecting older Australians, Prime Minister Scott Morrison is set to announce an increase in the singles income test threshold – from $57,761 to around $90,000 – from July 1 this year to broaden access to the concession card.

At the Commonwealth level, all card holders are eligible for cheaper medications and health care and may also be entitled to state, territory and local government savings, like discounted rates, electricity and gas bills, ambulance, dental, eye care, recreation and public transport.

Morrison says the $70 million expansion is part of the coalition’s plan to deliver cost of living relief.

“This means more senior Australians could save hundreds of dollars, including up to $428 a year for access to a monthly script for vital medicines and a refund for medical costs if you reach the Medicare safety net,” he said.

Social Services Minister Anne Ruston said the commitment would build on the government’s $525 million plan to reduce the safety net threshold for PBS medications, including a cut in the price of medications by $10 per script from January 1 next year.

At Labor’s campaign launch in Perth on Sunday, Albanese revealed a higher medicines price cut of $12.50.

As the election campaign reaches the halfway point, Labor is hoping its “A Better Future” themed campaign launch on Sunday will provide some momentum after Albanese spent a week in COVID-19 isolation.

The launch included new policies on first home purchasing, manufacturing and electric vehicles, as well as dealing with the issue of gender pay equity and fixing problems in aged care and child care.

A Newspoll published in The Australian on Monday shows Labor is leading the government by 53 per cent to 47 per cent on a two-party preferred basis.

If realised, the coalition could lose 10 seats at the May 21 election.

A Resolve poll of 1408 voters published in Nine newspapers on Monday closely mirrored the Newspoll result, finding Labor leading on a two-party basis at 54 per cent to 46 per cent.

Early voting starts on May 9.

Controversial Liberal candidate Katherine Deves was briskly whisked away from a campaign rally after refusing to answer questions about her views on transgender women in sports.

The US plans to give Ukraine a $US33 billion ($A47 billion) aid package to allow the United States Government to seize Russian oligarchs’ assets and send money from their sale directly to Ukraine.

President Joe Biden asked Congress on Thursday to approve the assistance package for Kyiv in what would mark a dramatic escalation of US funding for Ukraine more than two months after it was invaded by Russia.

US Senate Democratic leader Chuck Schumer said the Biden administration had asked representatives to insert provisions into the aid bill to help it seize assets, liquidate them and send Ukraine the money.

“Ukraine needs all the help it can get and, at the same time, we need all the assets we can put together to give Ukraine the aid it needs,” said at a media briefing in New York City.

The US House of Representatives signalled its support for giving the administration more power to target oligarchs profiting from their association with Russian President Vladimir Putin when it approved non-binding legislation on Wednesday.

The $US33 billion ($A47 billion) in funding for Ukraine, which lawmakers have said they want to approve quickly, would be used to provide weapons, ammunition and other military assistance, as well as direct economic and humanitarian aid to Ukraine.

Pelosi is the highest-ranking US official to visit Ukraine since the invasion started on February 24.