Lord Mayor Sandy Verschoor and Commercial & General executive chairman Jamie McClurg this morning broke ground on the 7500 square-metre site for the first time in over 30 years, marking the start of three years of construction.

InDaily previously reported that Commercial & General would start building the “Eighty Eight O’Connell” development on April 4 ahead of its anticipated opening in the first half of 2025, but McClurg said his company decided to push work out by a few weeks to avoid the Easter break.

The site has remained vacant for 33 years after furniture retailer Le Cornu sold the property in 1989 and a string of subsequent development proposals failed to kick off.

“It was 33 years ago – 1989 – a year when the first episodes of The Simpsons were going to air, the World Wide Web was invented and Madonna was at the top of the charts with ‘Like a Prayer’,” McClurg said.

“Despite many of us no doubt saying many a prayer to finally see action here, it’s hard to fathom why nothing happened for so long.”

The development, designed by architect Woods Bagot, includes two 13-storey towers and one 15-storey tower accommodating retail and commercial space, as well as 160 residential apartments priced upwards of $400,000, with 15 per cent dedicated to affordable housing.

The plans were met with harsh criticism from some city councillors and North Adelaide residents when they were unveiled in 2020.

Last year, a group called “Vital North Adelaide” unsuccessfully challenged in court the State Commission Assessment Panel’s decision to approve the Eight-Eight O’Connell development, arguing the complex would look out of place in North Adelaide, which has a regulated building height limit of eight storeys.

But that challenge didn’t stop property sales, with Commercial & General this morning confirming it has so far sold more than 55 per cent of total properties, with more than 50 per cent of the 8500 square-metres of commercial and retail spaces also secured or under negotiations.

“I think we’ve gotten rid of the vocal minority and we can get on and get the job done now,” McClurg said.

“I can remember back when there was a lot of opposition to this thing called the Adelaide Oval redevelopment and I don’t hear those people anymore.

“I heard opposition when people talked about trams and I don’t hear them anymore and I think that this is a good time for the narrative just to grow up in Adelaide.” 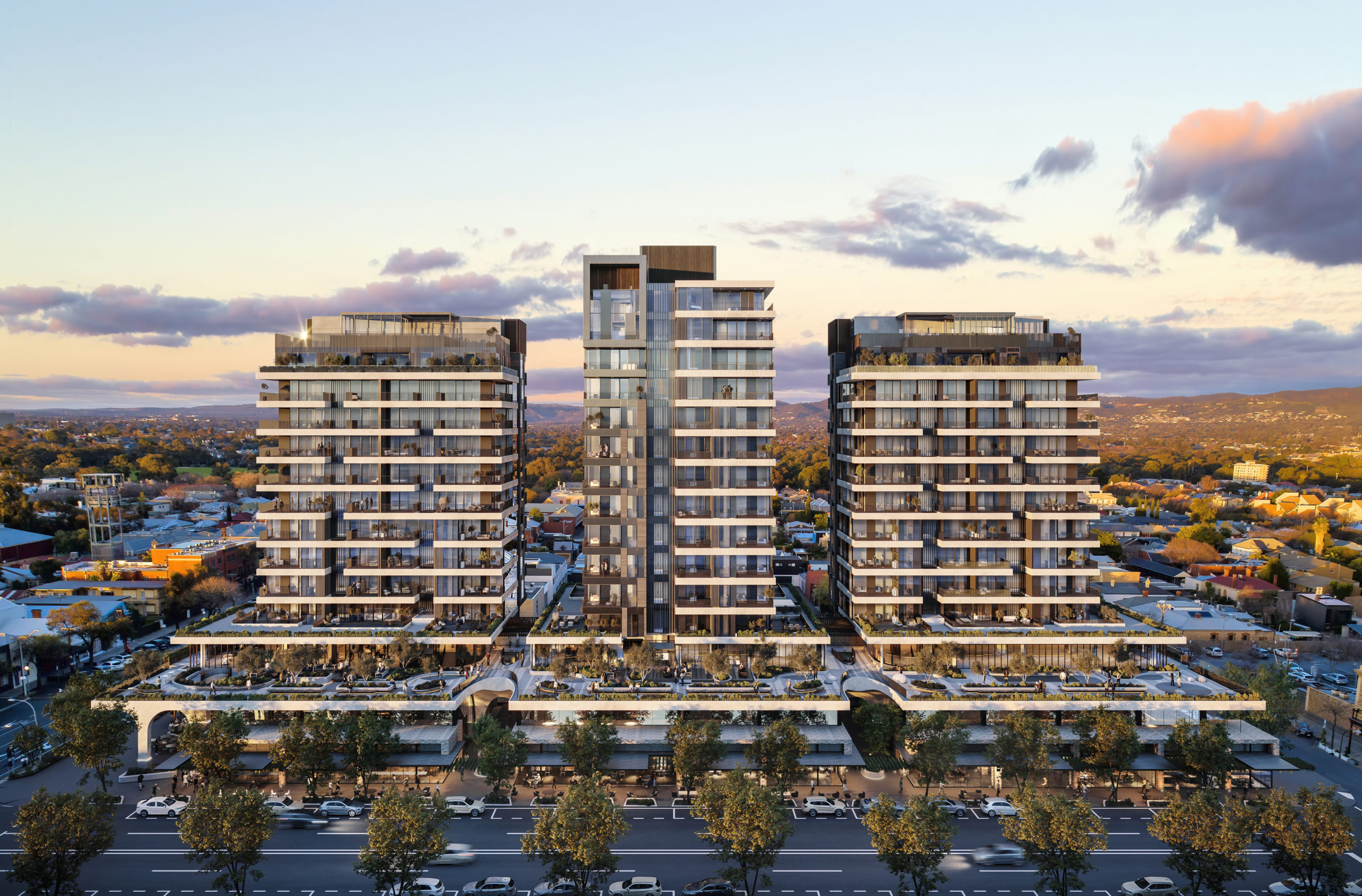 The development’s three towers will be connected by a “multi-functional podium” and include access to indoor and outdoor swimming pools, as well as a gym, spa and sauna.

The complex is also planned to house cafés, restaurants, health and beauty services, and fashion and homewares shops, which will be accessible to both residents and the broader public.

An outdoor terrace – to be called “Sky Park” – will be accessible to the public and be used to host community events, while 405 off-street car parks will be built over three basement levels.

“The park up there is actually something that people can come and use,” McClurg said.

“We’re keeping it open as a privately-owned space so that we can curate and use it and keep it clean and do all those things that councils would find hard to do to be able to tend to that particular land.

“We’ve also got a generosity of space at the ground floor level where we’ve stepped back, so people can dine, they can interact, they can connect on O’Connell Street.

“Back in the old days we used to meet on the corner… at Café Paesano – it was the Saturday morning thing to meet and people would stop and they’d chat and they’d do those sorts of things, so we’re going to recreate that in a modern form.”

The council bought the vacant land from developer Con Makris for $34 million in December 2017 with the help of a $10 million State Government grant.

In December 2020, it confirmed it had selected Commercial & General as its development partner.

The council expects to receive $25.5 million in commercial return, plus rate revenue.

“During the course of the project with milestones we hit we make payments to the council,” McClurg said.

“That ensures they get the design that they want, we deliver also on our promise and they can hold us accountable right through for the delivery to practicable completion.”

Verschoor said she hoped that those who opposed the development would “grow to enjoy and love what is going to be here”.

“This will be a destination – more than anything we need to enliven the precinct and this is an absolute catalyst for that reinvigoration,” she said.

Commercial & General is also behind the $345 million Calvary Adelaide Hospital on Angas Street, as well as the $1 billion redevelopment of the Football Park site in West Lakes.