Pledging a strong focus on small business, regional SA, the state economy, “liveability”, his former environment portfolio and healthcare – including mental health and ageing – Speirs today declared there was a “very clear pathway to government” for his demoralised and divided party.

But those divisions were today set aside when 18 members of the 24-person party-room backed him for the leadership, as former Premier Steven Marshall bowed out, having pledged to serve out his four-year term on the backbench.

Speirs was elected with the overwhelming support of the moderate-dominated party-room, defeating challengers Josh Teague, the former Speaker and recently-elevated frontbencher who won five votes, while Nick McBride, the maverick Mackillop backbencher who last year threatened to quit the party, managed just one.

Asked what South Australians could expect from his leadership, Speirs said: “I think you can expect a traditional centre-right approach from my term in the leadership.”

Speirs is avowedly factionally unaligned; he has been previously embraced by some in the moderate wing, but has bolstered his conservative credentials in recent times by leading the charge against key elements of the recent abortion legislation and opposing a Bill to decriminalise sex work.

InDaily last year revealed his address to the Southland Church congregation in which he railed against the separation of church and state, urging religious communities to become involved in the political process.

However, he has cited his “progressive”, and nation-leading reforms as Environment Minister, in particular banning single use plastics as well as opening reservoirs for public recreational use and launching Glenthorne National Park.

However, he also fell foul of a Royal Commission into the River Murray’s management in 2019, with commissioner Bret Walker SC slamming him for agreeing to “new criteria” proposed by the upstream states that he described as “nothing short of a capitulation to the interests of the current Commonwealth Government, and those of Victoria and New South Wales”.

Speirs roundly rejected the criticism, and survived a vote of no confidence moved by then then-Labor Opposition.

Today, he reiterated his claim to Australia’s “most progressive environment policy”, adding: “From a social point of view, there are no particular issues I expect to be chasing down on that front.”

“I had particular views about legislation that was presented to the parliament that was very much between me and my conscience last year,” he said.

“Those items have been voted on – we’ll see what items present in the parliament in the future.” 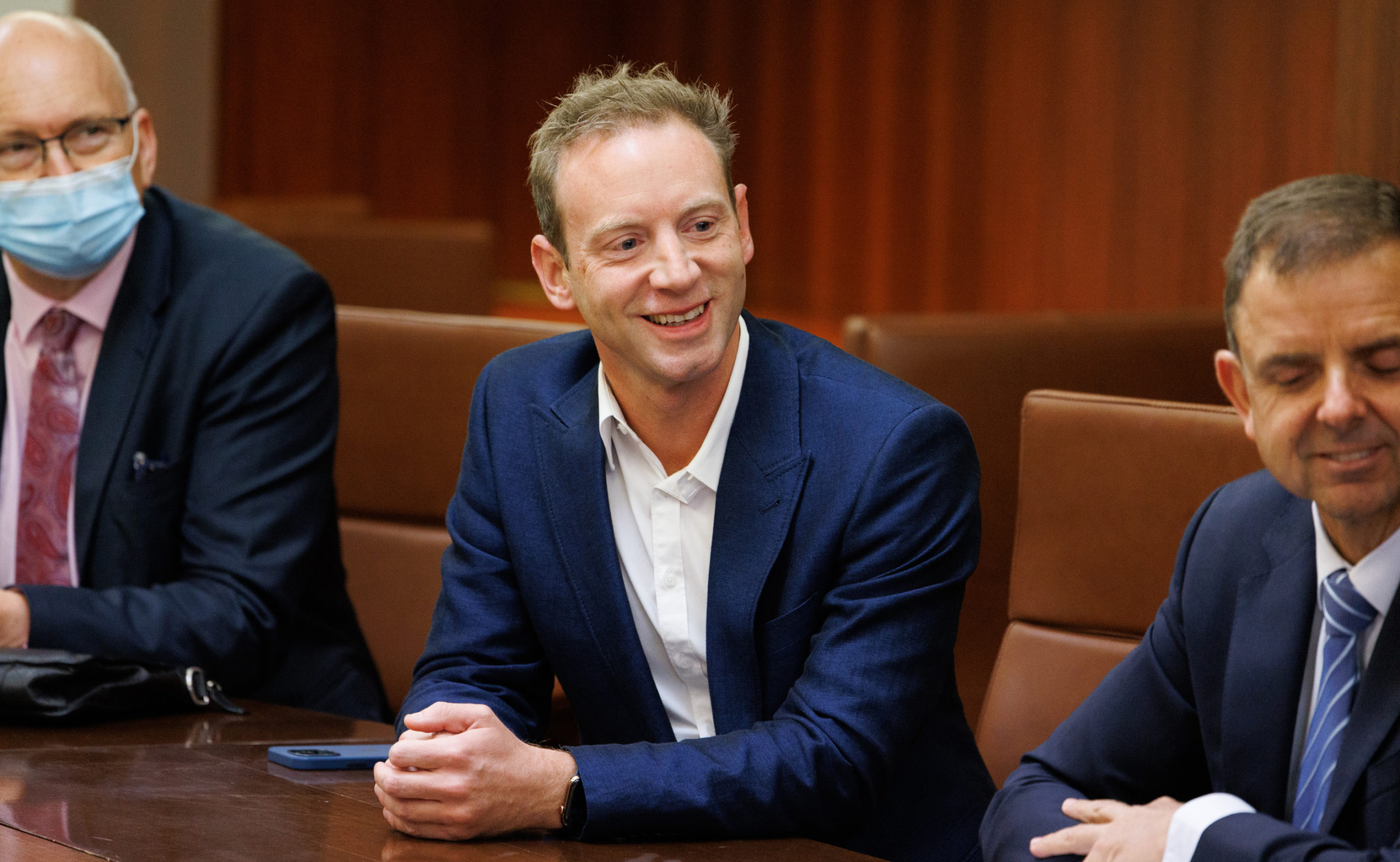 Speirs in the meeting this morning. Photo: Tony Lewis / InDaily

As forecast by InDaily this morning, recently-elected Legislative Councillor Nicola Centofanti will lead the Liberals in the Upper House, the Right-winger defeating moderate veteran Michelle Lensink six votes to two, with Jing Lee elected as her deputy unopposed.

Speirs said the party would “present a fresh diverse face” with “two first-generation migrants in the leadership team”.

“I suspect I probably have the most interesting accent of any Opposition Leader or Leader of the Government is recent times – and South Australians should be prepared to hear a lot more of this accent going forward,” he joked of his Scottish lilt.

“I’d ask the TVs to, wherever possible in the first couple of months, use subtitles – that’s what we do on our YouTube… you should see the predictive text sometimes, what that comes up with.”

Informally dressed in jeans and a blazer, Speirs said it had “been a great journey for me from the farm back in Scotland”, adding: “My family and friends over there today are looking on in some bemusement.”

“They can’t quite believe [what’s happened to] the kid that went to Kirkcolm Primary School, with four kids in the year – two boys, two girls and two teachers, Mrs McNeil and Mr McCracken… they’re both still with us today and I give a shoutout to them,” he laughed.

Speirs insisted there was “a volatility in the electorate” with “a range of marginal seats that are winnable by either political party”.

“If we get the vision right, if we can paint a vision of what we see as South Australia in the future, I think we can inspire South Australians to back us at the 2026 state election,” he said.

While Speirs managed to galvanise cross-factional support, he has been forced to hose down widespread suggestions from Liberal insiders about a toxic relationship with the party’s former deputy leader Vickie Chapman, who this month refused to rule out quitting parliament altogether if Speirs won the ballot.

Chapman was conspicuous by her absence today, with a Liberal spokesman saying she was on leave and holidaying with family interstate.

Right-winger Adrian Pederick was also absent as he is currently isolating with COVID.

Both absentees had a proxy vote in the ballot.

“She’s headed over to see her much loved grandkids in NSW and spending some time with them,” Speirs said of Chapman.

“I have no feud with Vickie Chapman… I look up to her, admire her, respect her and want to celebrate her as SA’s first female deputy premier.”

As to whether Chapman – who is still awaiting an Ombudsman’s inquiry into her rejection of a timber port on Kangaroo Island, which led to her losing the confidence of the House – could return to the frontbench, Speirs said: “That’s something I’ll discuss with colleagues in the coming days.”

“I’m not ruling anything in or out with what the shadow ministry looks like,” he said.

He said while the Marshall Government had made mistakes, there were also significant achievements “but perhaps because of the complexities of COVID-19, some of those achievements weren’t landed or we didn’t get there in terms of landing the solutions”.

He said Labor leader Peter Malinauskas was “enjoying a honeymoon at the moment and that’s to be expected” but “I’ll certainly be watching what he does into the future”.

“He’s made a lot of very lofty promises – we’ll be ensuring those promises are delivered,” he said.

“His frontbench does not have the depth of talent we might be keen to see in the leadership team of SA [so] we’ll be scrutinising that.”

But he said “one thing we won’t be doing is providing opposition for the sake of opposition”.

“I find that unattractive, and I don’t think South Australians are after that… we’ll be seeking to cast an alternative vision for what SA is all about, and working with South Australians to shape and develop that.”

Gardner said the new leadership team was “a very balanced and diverse group”.

“The Liberal Party’s different from the Labor Party – our members of parliament are not told what to do by factional operatives in back rooms of unions,” he said.

Instead, he said there were “24 members with different experiences and an absolute purpose to serve the people of SA”.

“And each of those 24 members made decisions about whether to run or not, and who they want to vote for based on what they think is in the best interests of the Liberal Party and the people of SA,” he said.

Gardner, who said he had known Chapman since he was a teenager, said: “I hope she serves the four years she’s been elected for; she certainly has a contribution to make.”

A member of the Right faction, her candidacy prompted conservative veteran Terry Stephens not to contest the Legislative Council ballot, as the party opted for generational change – and a woman in a key leadership role.

“I think we do very well as a party in encouraging women to stand for parliament,” said Centofanti, despite the party now boasting just three women in the lower house.

“There’s a lot of structure in our party that really encourages women… I’m really proud to be here.” 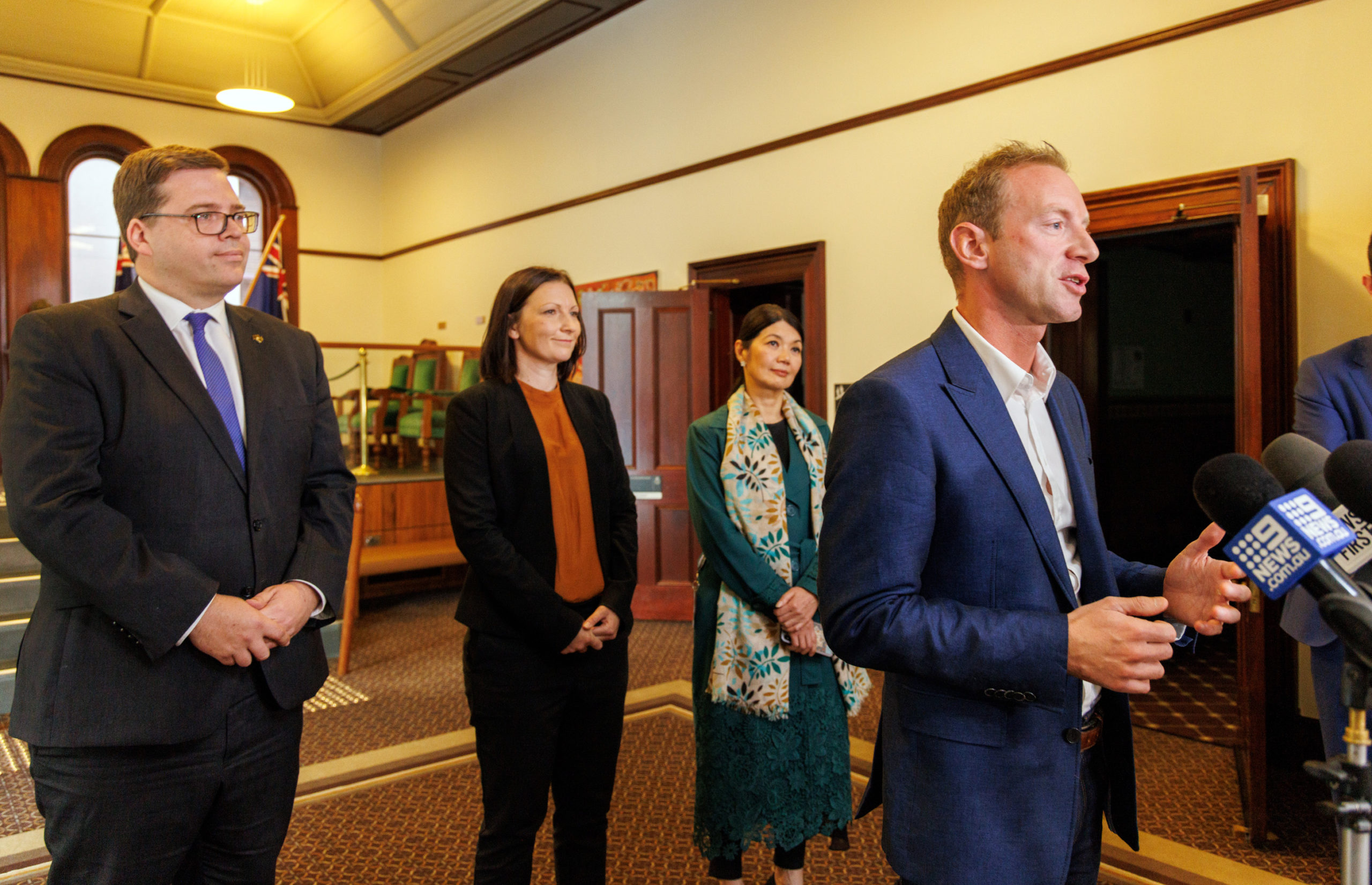 Centofanti has been linked to the Right faction’s membership drive in Evangelical communities that last year highlighted factional divisions and prompted the moderate-run state executive to temporarily freeze a glut of new memberships.

“We always encourage new membership and I think that’s the most important thing in any political party,” she said today when asked if the recruitment campaign would continue.

Outgoing leader Steven Marshall, who was elevated to the leadership nine years ago, did not speak outside the meeting but said in a statement this morning it had been “the greatest privilege to serve South Australians over the last nine years and to lead the state as Premier through one of the most important and difficult periods in recent history”.

“We accomplished incredible things as a Liberal Government and, despite the challenges caused by COVID-19, worked tirelessly to ensure South Australia emerges from the pandemic stronger than ever,” he said.

“I am proud of what we were able to achieve to make our state a better place including things such as record employment, Adelaide being recognised as the third most liveable city in the world and establishing South Australia as our nation’s space and defence state.

“We can hold our heads high knowing we have left South Australia in a better place than when we formed government in 2018.” 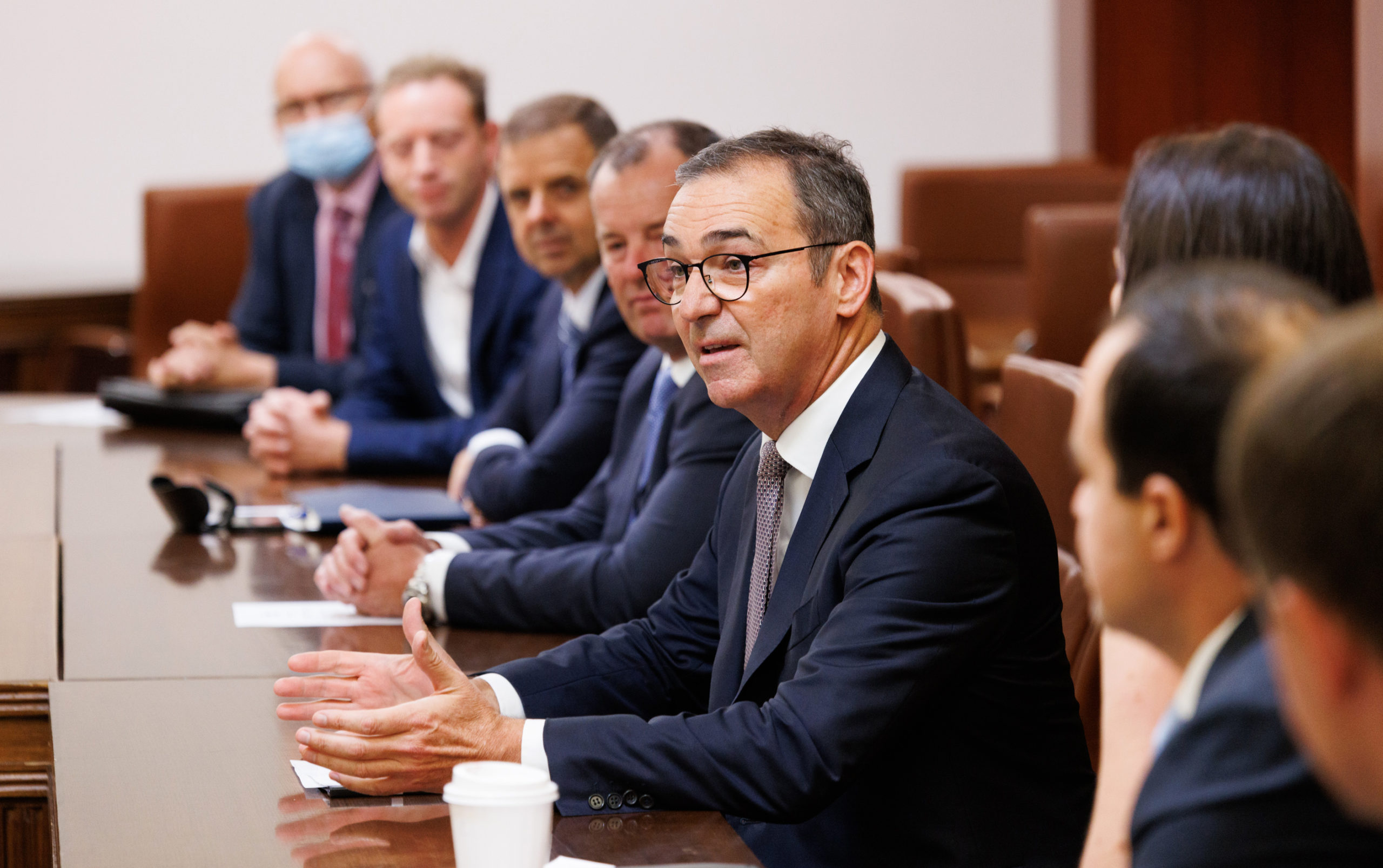 He thanked his colleagues “for their support” and noted “the unconditional love of my family”.

“I look forward to the future and watching the Liberal Party progress further under the guidance of a new Leader,” he said.

“I am confident the Liberal Party will return to Government in 2026 to achieve the best outcomes for South Australians.

“For now, I am excited to take a step back and spend more time with my children while I continue to represent the people of Dunstan.”

Marshall has previously ruled out triggering a by-election in his eastern suburbs electorate, which is now the state’s most marginal seat.