The Julia Farr Centre was built in the 1970s and housed people with disability, but it stopped accepting new residents in 2014 and was permanently closed in 2020. All residents have since been moved into community accommodation or aged care.

Renewal SA is managing the sale of Highgate Park, along with agents JLL and Savills, on behalf of the Home for the Incurables Trust which owns the site.

A Renewal SA spokesperson said the agency is now “finalising preparations” to release the site to market via an expression of interest process, which is expected to commence “in coming weeks”.

The property is expected to attract interest from a wide range of local and interstate developers for various potential outcomes that may include residential, seniors living, aged care, mixed use and high-end hotels.

“Renewal SA was very pleased with the response from interested parties both locally and interstate,” the spokesperson said.

“We note further interest from interstate has emerged since the market sounding and as restrictions have eased.”

The spokesperson said the eventual purchaser will determine the future use and development of the site, subject to approvals.

“It is a unique offering in terms of location, size and existing built form, and the market will determine its value through the Expression of Interest process,” the spokesperson said.

“The property is expected to attract interest from a wide range of local and interstate developers for various potential outcomes that may include residential, seniors living, aged care, mixed use and high-end hotels.”

Proceeds from the land sale will be “strictly” earmarked to benefit people with disability, the State Government says.

Minister for Human Services Nat Cook is the sole trustee of the Trust which owns Highgate Park.

Cook said while the sale was a “complex undertaking”, it is being “driven by ongoing consultation with people living with disability, their families and their support workers”.

“The HFI Trust was established to support people living with disability and improve their quality of life – all sale proceeds will go towards this purpose,” she said in a statement.

JFA Purple Orange CEO Robbi Williams, whose disability organisation is advising the trust on its future governance and how to best use its incoming funds, said there wasn’t an expectation the site would be repurposed into a facility specifically for people with a disability.

“In terms of the perpetual trust, you obviously want to get as much money in as possible,” he said.

“If [the site] is converted in a way that produces as maximum a yield as possible to the Trust then we think that’s a good thing.”

He said the “only caveat” was ensuring the development “contributes to a sense of inclusion in Australian society and communities”.

“There’s nothing about what Renewal SA is saying that would in it of itself cut across that,” he said.

The Department of Human Services conducted two rounds of consultation on the Highgate Park site in 2020 calling for suggestions on the best way to repurpose the facility.

Among the recommendations the Department received were purpose-built housing for people living with disability, a training centre for disability carers, a disability childcare centre or a disability recreation hub.

A DHS spokesperson said in March last year that “any decision on the future of the site will meet the Trust’s objectives to benefit people with disability, including any assets belonging to the trust”.

Williams said it was “hard to guess” how the Trust will spend the new funds but he expects it to go towards disability services which are not ordinarily provided by the government or community sector.

“There are going to be important things, you could imagine things around how to invest in the disability community and its leadership going forward,” he said.

Meanwhile, the Gosse International Student Residence, a tenant of Highgate Park housing 64 international students, is worried about its future at the location and says it wasn’t involved in the consultation over the land sale.

Residence spokesperson Adam Bowden said the accommodation centre’s future was “at the mercy” of the future developer. 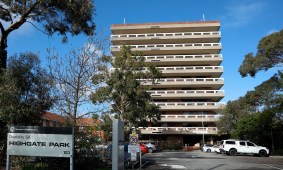 “We wouldn’t want to interrupt the overarching sort of objective of that consultation which was to achieve the most money for people with disability going forward,” Bowden said.

“It’s just disappointing that we find ourselves in a situation where we’re talking to the real estate agents who have been given the direction to sell the site as a single site.”

Elsewhere, Renewal SA is still yet to announce its preferred developer for the vacant former Le Cornu site in Forestville.

That’s despite former Treasurer Rob Lucas saying on March 16 that an announcement would be “highly likely next week or the week after”.

Renewal SA has previously claimed negotiations are taking “longer than expected”. The agency initially planned to announce the successful developer in the second half of 2021.