A 30-year-old man has been charged with manslaughter after an elderly man died in hospital following an incident at West Terrace earlier this month.

Police allege the occupants of an orange Honda sedan and a taxi were involved in an altercation at about 6.50pm on Friday, April 1.

A 70-year-old man from Cheltenham was taken to the Royal Adelaide Hospital with serious head injuries but died yesterday.

He will appear in the Adelaide Magistrates Court today.

Healthcare vs fuel refineries on the campaign trail

Federal Labor is set to continue its focus on health today with a pledge to trial 50 urgent care clinics across Australia, while the prime minister is set to announce $250 million for two domestic refiners to supply better-quality fuels.

Starting in western Sydney, Scott Morrison is expected to jet interstate later in the day to talk up $125 million grants to be matched by refineries in Brisbane and Victoria to begin major construction to upgrade their facilities.

Morrison says the investment will secure domestic fuel production and supply amid global uncertainty stemming from events like the conflict in Ukraine.

“COVID-19, the Russian war in Ukraine and trade restrictions have disrupted global supply chains and Australia is not immune,” he said.

“Oil refineries literally fuel a stronger economy and these investments will help keep our truckies, miners, defence force and farmers moving across Australia.”

Labor leader Anthony Albanese, meanwhile, will be in Melbourne on Wednesday morning to announce a trial of 50 urgent care clinics across the country which will offer families an alternative to busy hospital emergency departments.

The clinics will treat patients needing urgent care from health care workers including for broken bones, minor burns and stitches for cuts.

They will be based at GP surgeries and community health centres nationwide and will cost more than $135 million over four years.

Patients will be bulk billed and won’t have out of pocket costs when accessing services.

“These clinics are a key part of Labor’s plan to strengthen Medicare by making it easier to see a doctor,” Albanese said.

“Medicare Urgent Care Clinics will take the pressure off emergency departments, so they can concentrate on saving lives.” 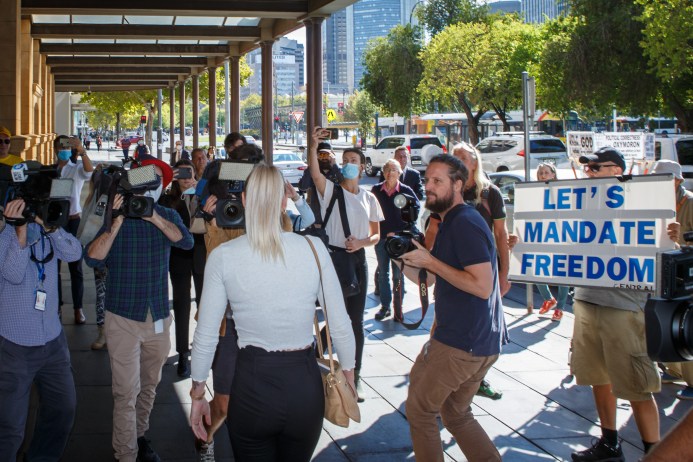 Police commissioner and state emergency coordinator Grant Stevens will for a second week be unable to attend a court challenge to South Australia’s COVID-19 vaccine mandates, due to sickness.

Stevens, who signed off on South Australia’s vaccination mandates, was due to appear before the Supreme Court today in AFLW player Deni Varnhagen’s ongoing legal challenge to the state’s COVID-19 vaccination mandate for health workers.

Varnhagen’s legal team has sought to question senior bureaucrats involved with implementing the vaccine mandate as part of the Emergency Management Act.

But SAPOL assistant commissioner Linda Williams said Stevens would be unable to attend this week due to an ongoing battle with the flu.

“He started off with Influenza A. That has now progressed to a more severe respiratory infection in his lungs,” she told reporters on Tuesday.

“He will not be attending court this week.

“That’s been put to the court this week that he will not be attending court on medical grounds.”

Williams said Stevens was at home recovering and “he does sound quite unwell”.

Chief public health officer Nicola Spurrier was forced to run a gauntlet of anti-vaccination protestors outside court last week after Varnhangen’s legal team subpoenaed her to appear before the trial.

However, Justice Judy Hughes dismissed the application, ruling there was “no relevant evidence” Spurrier could give to the trial.

South Australian senator Anne Ruston is set to be promoted to health minister if the Coalition wins next month’s federal election.

Ruston, who is currently minister for families, social services and women’s safety, would take over the portfolio from retiring MP Greg Hunt, who has been health minister since 2017.

Ruston is one of just two South Australians in the federal cabinet alongside Finance Minister Simon Birmingham.

She is serving as the Liberal Party’s official campaign spokesperson this election.

Prime Minister Scott Morrison is expected to formally announce the appointment this week.

Greens to push for dental care in Medicare

The Greens will push for more than $77 billion worth of dental care to be covered by Medicare if they win the balance of power at the next federal election.

The plan, worth $8 billion each year and $77.6 billion over a decade, will enable Australians to receive Medicare-funded dental care and orthodontic treatment as well as oral surgeries, periodontics and prosthodontics.

The Greens, who are hoping to expand on their nine seats in the federal senate, said the policy will be funded by a six per cent tax on the wealth of more than 130 billionaires in Australia and a corporate “super profits tax” on business profits above $100 million.

Greens senator for South Australia Sarah Hanson-Young said the move would stop people from putting off trips to the dentist due to prohibitive costs.

“Paying for dental with your Medicare card, like a visit to the doctor, just makes sense,” she said in a statement.

“When public dental patients in our state are waiting almost 15 months for services and spending up to $274 for a check-up, it’s clear that dental care is out of reach for too many.

“South Australians have the highest rate of preventable hospitalisations due to dental conditions. We need access to free dental care now more than ever.”

The poll, undertaken by UComms, was conducted on April 5 and used “self-completed automated voice polling methodologies”.

Greens leader Adam Bandt will use a speech to the National Press Club today to spruik the party’s policy.

The latest Morgan poll has the Greens on 12.5 per cent of the primary vote, higher than the 10.4 per cent they garnered at the 2019 election.

Qatar Airways has opened a new direct route from Adelaide to Auckland to mark the re-opening of Trans-Tasman travel.

The first flight of the new route – now operating three times a week – departed around 10:25pm last night and touched down in Auckland shortly after 5am.

The new route is an extension of Qatar’s regular service between Adelaide and Qatar’s capital Doha.

It comes as New Zealand today opened its borders to Australian travellers after the Trans-Tasman bubble was shuttered for the latter half of 2021.

“It’s wonderful that Qatar Airways has tagged its Doha-Auckland service through Adelaide, which means with the New Zealand border re-opening, travellers can immediately fly direct between Adelaide and Auckland,” he said in a statement.

“The strong outbound bookings show there’s plenty of interest in this service and it’s another positive step as the world opens up to travel.”

Qatar and Singapore airlines are carrying the majority of Adelaide Airport’s European traffic, after Emirates, Air New Zealand, China Southern, Cathay Pacific and Jetstar all pulled flights out of Adelaide during the pandemic. 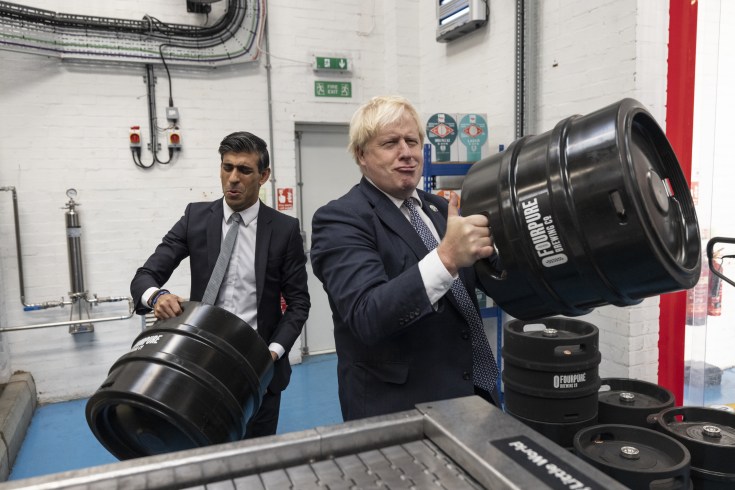 Prime Minister Boris Johnson and Chancellor Rishi Sunak have been fined as part of a police probe into allegations of lockdown parties held at Downing Street. Photo: Dan Kitwood/PA Wire

Boris Johnson has become the first UK Prime Minister in history to commit a criminal offence in office after he was fined for attending a birthday party in Downing Street in violation of COVID-19 rules.

Johnson has paid a fine for attending a birthday bash in Downing Street on June 19, 2020, and offered a “full apology” for the lockdown-busting event.

The event has brought Johnson’s leadership into question again and reignited calls from the Labor Party for him to resign.

Johnson’s wife, Carrie Johnson, and Chancellor of the Exchequer Rishi Sunak are also among dozens fined by the Metropolitan Police over so-called “partygate”.

Johnson said it “didn’t occur” to him that the gathering in the Cabinet Room to mark his 56th birthday was a violation of coronavirus rules which his government created.

However, he said that after being issued with a fine as part of a Metropolitan Police investigation into alleged parties at the heart of the government during the pandemic he “now humbly accepts” he did breach COVID-19 laws.

Speaking to broadcasters at Chequers, Johnson said he “fully respects” the outcome of the police investigation and that he accepts “in all sincerity that people had the right to expect better” from him.

Outlining the busy nature of the day the fine related to, Johnson said he chaired eight meetings in No 10 and followed them up with a four-hour round trip to a school in Hemel Hempstead, Hertfordshire.

“There was a brief gathering in the Cabinet Room shortly after 2pm lasting for less than 10 minutes, during which people I work with kindly passed on their good wishes,” he said.

“And I have to say in all frankness at that time it did not occur to me that this might have been a breach of the rules.”

“I now humbly accept that I was.

“But I think the best thing I can do now is, having settled the fine, is focus on the job in hand. That’s what I’m going to do.” 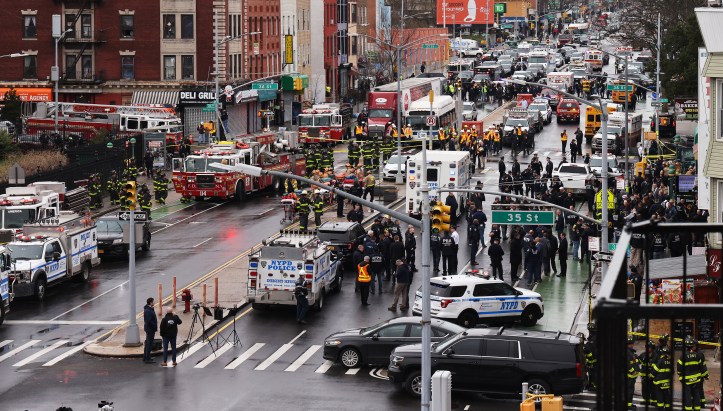 A masked gunman has set off a smoke bomb and opened fire in a New York City subway car, injuring 16 people and throwing the morning commute into chaos, local officials said.

Ten people were shot in the incident, New York Police Commissioner Keechant Sewell said, without saying how the other injuries occurred.

The perpetrator was still at large, and the incident was not currently being investigated as an act of terrorism, Sewell said, but would not rule out anything as a motive.

Smoke billowed out as the train car pulled into the 36th Street station in Brooklyn’s Sunset Park neighbourhood and opened its doors, video showed.

Riders trapped inside poured out, some collapsing to the ground. Images showed streaks of blood on the platform.

“This morning, as a Manhattan-bound N train waited to enter the 36th station, an individual on that train donned what appeared to be a gas mask, he then took a canister out of his bag and opened it,” Sewell told a press conference.

“The train at that time began to fill with smoke. He then opened fire, striking multiple people on the subway and in the platform.”

The suspect was reported as a black male with a heavy build, wearing a green construction-type vest and a hooded sweatshirt, Sewell said.

Outside the 36th Street station, in an area known for its thriving Chinatown and views of the Statue of Liberty, authorities shut down a dozen or so blocks and closed off the immediate area with yellow crime scene tape.