Anthony Albanese has sought to move on from his economic figure gaffe, saying he will shake off the incident.

While continuing to campaign in Tasmania in the Labor-held seat of Lyons, the opposition leader aimed to downplay his comments from Monday where he could not state the unemployment rate or the official interest rate.

Instead, Albanese moved to shift debate back towards policy, unveiling a plan to reinstate a 50 per cent regional loading for bulk-billed telehealth psychiatric consultations.

“The Labor Party is actually the only party that’s released comprehensive and detailed policies around supporting economic growth and the jobs that that will create,” he told reporters in northern Tasmania.

“When you make a mistake with a number, and I was concentrating on something else, it shouldn’t have happened, you own up to it and move on … I wish it hadn’t had occurred, I am usually very good with numbers.”

Prime Minister Scott Morrison seized on Monday’s remarks during a press conference in the marginal seat of Parramatta, which is currently held by Labor by 3.5 per cent.

“Leaders will not get every single figure right, and that’s not really the issue here. The issue is there’s something Anthony Albanese should be apologising for, it should be that he doesn’t have an economic plan,” he said. 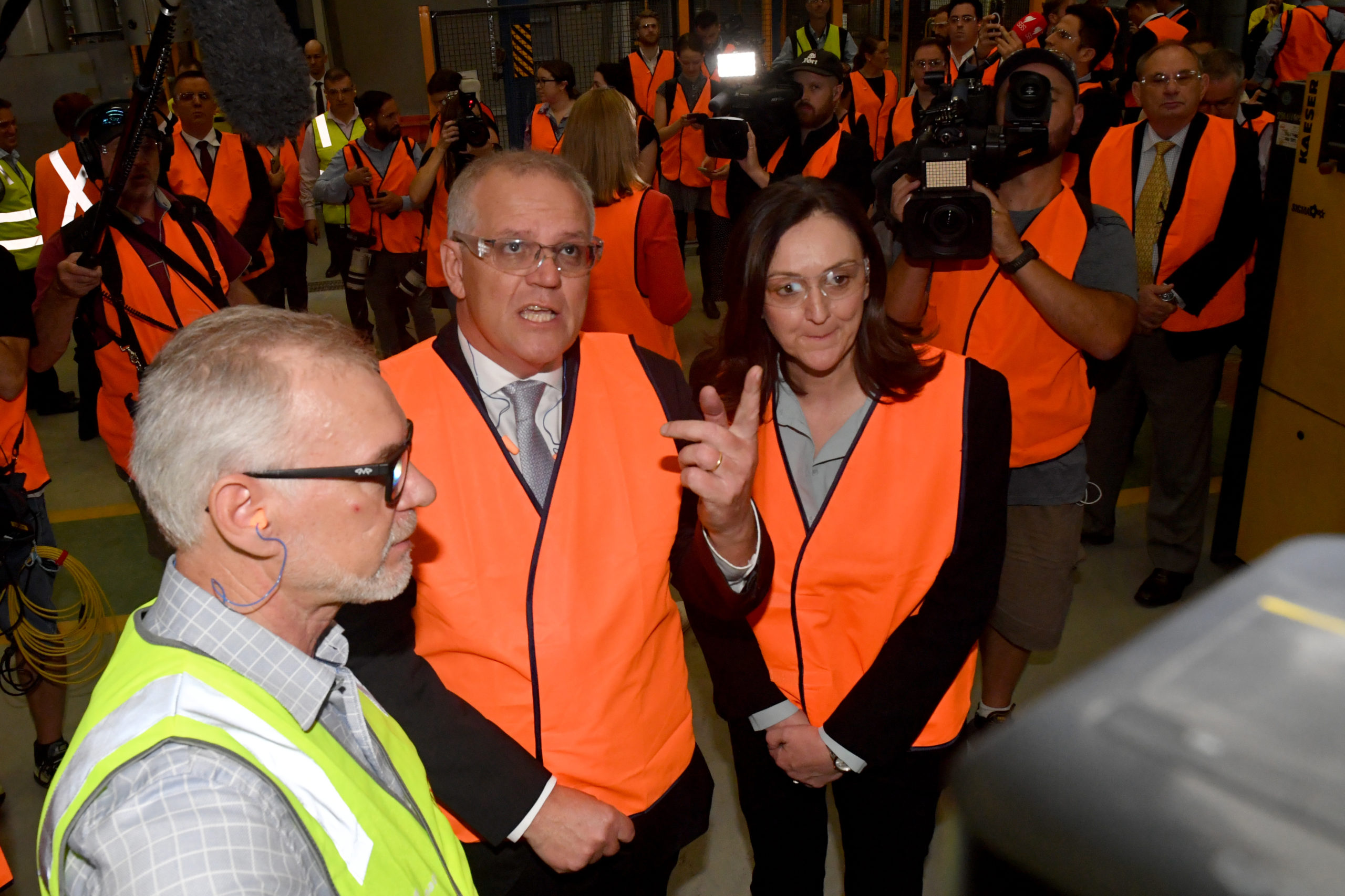 Prime Minister Scott Morrison during a visit to Rheem Australia on Day 2 of the 2022 federal election campaign in Parramatta, Sydney. Photo: Mick Tsikas/AAP

The government was using the second full day of the campaign to spruik a pledge to create 1.3 million jobs over the next five years.

However, Albanese said the government could not be trusted on job predictions.

“This is a government that don’t have a plan for the economy. That’s why from this government what you’re seeing … support, these one-offs that disappears as soon as people have cast their vote,” he said.

“(The budget) was all about an election, what we need is a plan for the economy.”

It comes as a new opinion poll showed Labor maintaining its lead over the government.

The Roy Morgan poll shows Labor ahead 57-43 on two-party preferred, while Labor is also ahead in all six states.

Despite being behind in the polls, the prime minister stressed the election was not about a popularity contest.

“This is about whether people are good at managing the economy and have a strong economic plan,” he said.

“You can’t risk it on an inexperienced and unproven team.”

Businesses have shrugged off the impact of the war in Ukraine on the global economy, which has fuelled inflation pressures through rising commodity prices and disrupted supply chains.

There was little evidence of any adverse impact from events in Ukraine, NAB chief economist Alan Oster said on Tuesday.

Business conditions also surged, by nine points to an index of 18, for the largest one-month jump since June 2020 when the economy was starting its recovery from recession.

“Businesses reported very strong trading conditions and a sharp rise in profitability, which indicates demand is continuing to hold up as the economy rebounds from Omicron and growth gathers momentum,” Oster said.

The weekly ANZ-Roy Morgan consumer confidence index – a pointer to future household spending – rose by 1.3 per cent to 94.6 – still below the key 100 level.

ANZ head of Australian economics David Plank said declining terminal gate prices for petrol and the flow-through of the reduction in petrol excise should see prices even lower in coming weeks.

“Along with the Easter holidays, this is likely to boost sentiment,” he said.

A group of prominent South Australians including former senior judges and politicians across the party divide has called on the Malinauskas Government to embark on major reform of the state’s prison system, demanding an end to the state’s justice “revolving door”.

The Justice Reform Initiative, a national alliance backed by prominent Australians with professional knowledge or lived experience of the justice system, is today releasing a major report into the “state of incarceration” in SA, which urges a new approach to help cut recidivism rates and reduce the number of South Australians behind bars.

The report says that “the SA prison population has grown by almost 50 per cent since 2012”, citing an “over-reliance on imprisonment as a default response to both disadvantage and offending [which] has resulted in a situation where too many people in the justice system are unnecessarily trapped in a cycle of harmful and costly incarceration”.

“Many people leave prison jobless, homeless and without the necessary supports to build healthy, productive, connected, and meaningful lives in the community.

“The criminal justice system is characterised by a cycle of disadvantage, where people enter and return to prison repeatedly.”

The group says this “’revolving door’ model is forecast to cost South Australian taxpayers $361 million this year”, on top of which “the state government is in the process of spending an additional $187 million on new prison beds”.

“We are deeply alarmed by the fact that SA taxpayers are spending $1.5 million this financial year for the business case for a ‘rehabilitation prison’,” she said. “Coupled with the $187 million allocated for new prison beds, this is money which the state cannot afford to spend on a failed and antiquated approach to criminal justice.

“South Australia has a proud history of leading the nation in many areas of social reform, and we urge the Malinauskas Government to take this chance for a new direction which is backed by evidence and would deliver better outcomes for all South Australians… it’s time to invest in people, not prisons, and tackle the underlying social issues that funnel many disadvantaged people into the criminal justice system.”

The group advocates community-led diversionary and post-release programs, addressing homelessness, social and cultural community connection, and facilitating access to a range of services and supports including for mental health, cognitive impairment and problematic drug and alcohol use.

They also want legislative change to “prevent children unnecessarily entering the justice system in the first place” by raising the age of criminal responsibility to 14.

IS fanatic guilty of stabbing MP to death

A “fanatical Islamist” inspired by Islamic State has been found guilty of murdering veteran British politician David Amess by knifing him to death in a frenzied attack in a church where he was meeting voters.

Ali Harbi Ali, 26, a British citizen and son of a former media adviser to a prime minister of Somalia, repeatedly stabbed Amess in an attack last October for what he said was revenge for the lawmaker’s support for air strikes on Syria.

Prosecutors said he was a “committed, fanatical, radicalised Islamist terrorist”.

“This was a horrific act of terrorism motivated by religious and ideological beliefs,” said Nick Price, Head of the Crown Prosecution Service’s Counter Terrorism Division.

“Ali chose to commit this abhorrent crime for his own selfish and hateful reasons.”

Ali was found guilty of murder and preparation of terrorism at London’s Old Bailey court after the jury took less than half an hour to reach a verdict.

Crows draft sensation Josh Rachele has capped a stunning opening month in the AFL with a Rising Star nomination for his three goal, 19-possession game against the Bombers.

After debuting with five goals in Round One, the nod caps off a head-turning four games for Rachele, who turned 19 yesterday.

The teen’s 11 goals thus far puts him at the top of the Crows’ goal-scoring tally for the season.

Rachele, taken with pick 6 in last year’s draft, said he was “obviously honoured to get the nomination this week”.

“I’ve loved every minute of my time at the club so far, loved playing with my teammates and in front of the fans and the Showdown win in Round Three was an early highlight,” he told the Crows website.

“I’m excited about what we can achieve in the future.” 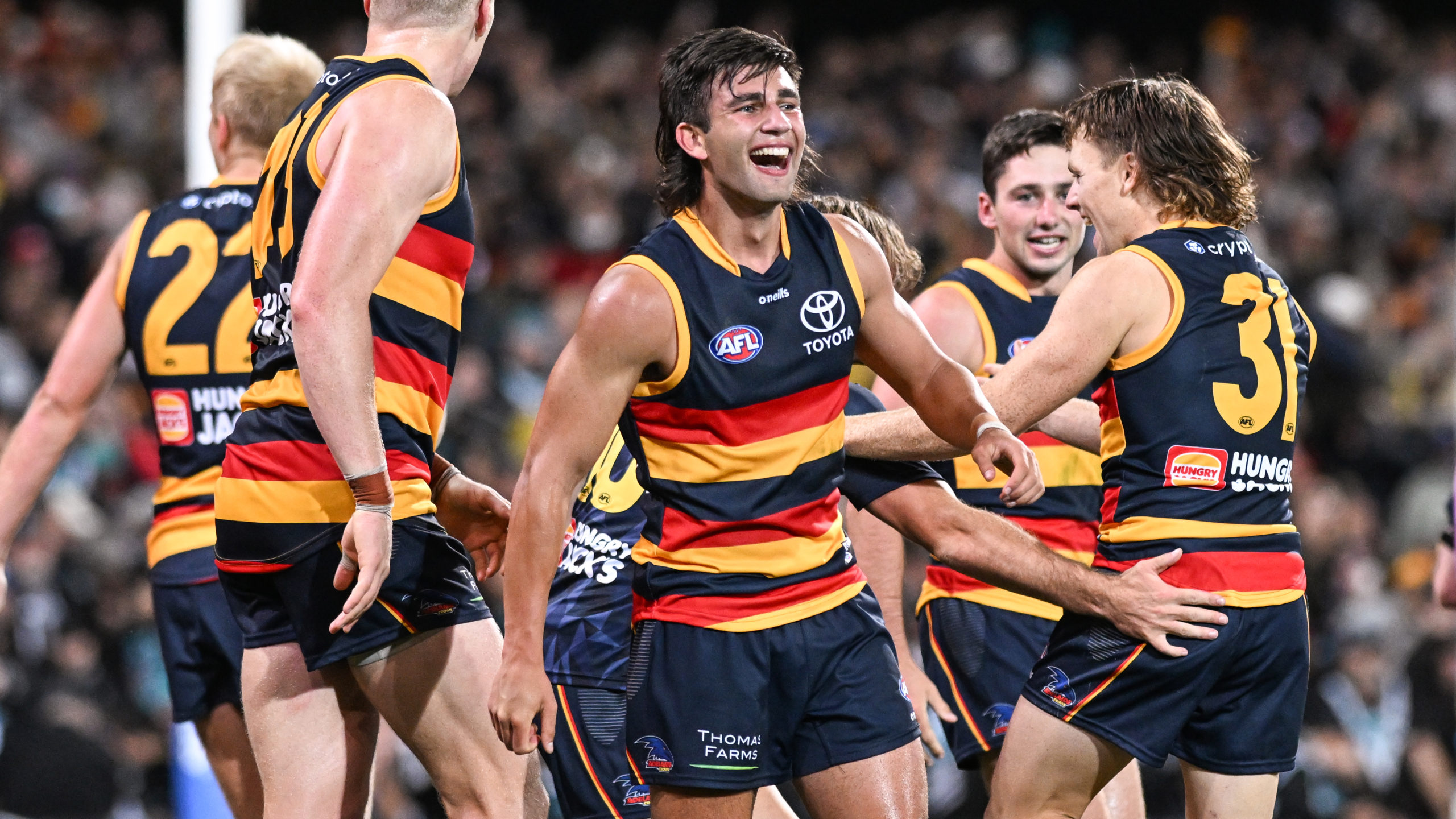 Kai Sotto produced his best performance in NBL ranks but it was former Adelaide player Jason Cadee who buried his old team and secured victory for Brisbane.

Cadee’s three-point dagger with 10 seconds left has iced a 93-85 victory for the Bullets over the fast-finishing Adelaide 36ers at the Adelaide Entertainment Centre.

After a dominant third quarter on Monday night, the Bullets threatened a blowout when they pushed ahead by 13 points midway through the fourth before the Sixers, spearheaded by Filipino teen sensation Kai Sotto (21 points), charged hard to the line.

Triples to Sunday Dech and Mojave King and two free throws from Sotto reduced the deficit to two points inside the final half-minute.

On the next possession, Brisbane whipped the ball around and worked the clock patiently when ex-36er Cadee, wide-open, buried a bomb to end Adelaide’s hopes and extend their losing streak to four.

“I thought we started the game with a roar,” Adelaide coach CJ Bruton said.

“As the game unfolded, (we had) a couple of breakdowns here and there, the lead started to get away.

“Jason did what he’s done the three times we’ve played them and closed it out.”