The state health system remains under pressure amid the current Omicron wave, with the new Malinauskas Government still in the process of setting up an extra 200 temporary hospital beds to prepare for an increase in COVID-19 hospitalisations.

Shortly after 11pm last night, there were 76 patients across Adelaide’s hospitals admitted to an emergency department waiting for a hospital bed, according to the ambulance service dashboard, with the Lyell McEwin, Noarlunga and Modbury Hospital EDs reaching above 155 per cent capacity.

All of Adelaide’s metropolitan hospitals were at “code white” last night, according to both the South Australian Salaried Medical Officers Association and the Ambulance Employees Association (AEA).

Code white is SA Health’s highest rating for the level of pressure on a hospital, indicating services and patient safety could be compromised.

Similarly, the South Australian Ambulance Service (SAAS) has declared its highest escalation status – “Opstat White” – every day since Wednesday, April 6, according to the AEA.

Ambulance Employees Association industrial officer Josh Karpowicz agreed the hospital system was still in a “crisis” and said the SAAS was now implementing surge measures – such as “rationing” ambulance crews – to deal with the current wave.

He said there was “significant ramping and ED overcrowding” on Sunday although did not have specific figures about the number of ambulances stuck on the ramp.

“That’s significantly worse in the last week or two due to the current COVID outbreak.”

He attributed the most recent surge to the number of staff knocked out of the workforce with COVID-19 and the state’s “tight” hospital capacity.

“We are going to see these issues continue even once COVID disappears,” he said.

Karpowicz said he has been made aware of an ambulance crew which was ramped at the Lyell McEwin Hospital for 3.5 hours on Sunday with an elderly patient.

He also said another crew over the weekend was caring for an assault victim that was transferred from the Royal Adelaide Hospital to the Queen Elizabeth and back again due to bed shortages.

The AEA, which ran a sustained and targeted $400,000 pre-election campaign against the former Marshall Government, highlighted four patients who died waiting for an ambulance in the lead up to an election.

Since the Labor Government has come to power, only one patient death has come to light – a man in his 50s who the union says was ramped outside the Flinders Medical Centre for five hours on March 22.

But Karpowicz said the AEA was committed to highlighting any significant patient incident they are made aware of during the new government’s term.

“We will notify the public of significant events that occur and we’ll continue to do that, just because there’s been a change in government that doesn’t stop us from notifying the significant issues that are facing the South Australian community,” he said.

“Obviously our daily campaign for more resources has been successful and that campaign has finished, but the highlighting of issues will continue to occur.”

Asked whether a patient death waiting for an ambulance was inevitable given the current stress on the system, Karpowicz said: “It’s the same risk profile that occurred before … patients are waiting far too long for an ambulance to even arrive and then they’re obviously getting stuck on hospital ramps.”

“The struggle is real for our members out there at the moment, they’re still working ridiculously long shifts … not having their breaks,” he said.

“I suppose the only benefit at the moment is the weather isn’t 40 degrees so when there’s ramping in hospitals with patients at least it’s more comfortable for the patient and less strenuous for our paramedics in full PPE.” 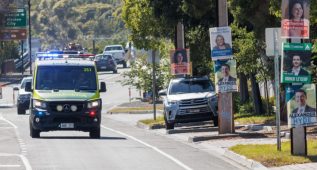 The union will be meeting with Premier Peter Malinauskas this week to discuss the current situation, Karpowicz said.

InDaily asked SA Health whether all metropolitan hospitals had declared a code white on Sunday but did not receive a direct response.

“Our metropolitan hospitals experienced increased demand due to complex COVID and a high number of walk-in presentations for several hours yesterday,” an SA Health spokesperson said.

“In response, we opened additional beds across the system to help meet demand and used alternative pathways of care to ensure patients received appropriate treatment.”