The 5784 new cases reported today surpasses the previous record of 5679 infections recorded on January 14 and comes just a day after new modelling released by SA Health showed South Australia would reach a peak of about 5500 daily cases.

In an update released a short time ago, SA Health said a woman in her 90s and a man in his 80s who tested positive for COVID-19 have died, while the number of infectious people in hospital has increased to 208 – up from 206 reported yesterday.

Eleven people in hospital with COVID-19 are currently in intensive care and one of those is on a ventilator.

The majority of COVID-19 hospital cases – 137 – are fully-vaccinated, 47 are either unvaccinated or partially vaccinated, and 22 have an unknown vaccination status.

Modelling from the University of Adelaide and released on March 22 predicted South Australia could reach upwards of 8000 cases by early April.

But revised modelling released yesterday showed the BA.2 subvariant of Omicron was more likely to peak at 5500 cases a day, with peak adult ward occupancy also revised down to roughly 150 beds from 200. 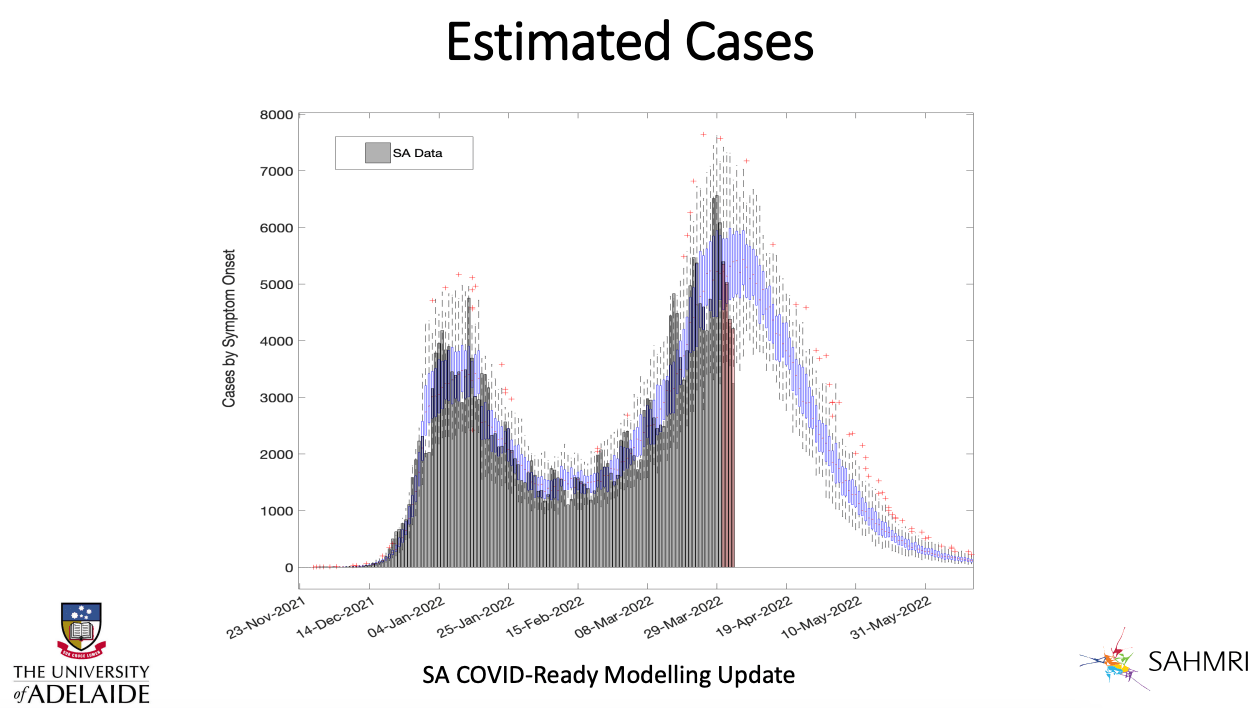 Chief public health officer Nicola Spurrier earlier this morning speculated South Australia could be past its forecast peak in COVID cases, but warned she would need to see case numbers for the rest of the week.

“I would say that I need the next couple of days data to say whether we’ve reached the peak or not,” she told ABC Radio this morning.

“But chances are we probably have and we’re in that plateau period, but I wouldn’t want to call it until I’ve seen the rest of the week’s data.”

Premier Peter Malinauskas also said it was too early to make a call on whether South Australia had passed the peak or not.

“While there’s reason for optimism it’s way too early to anticipate that we’ve passed the peak,” he said.

“Let’s wait and see what happens throughout the course of the middle of this week, which traditionally presents larger numbers than what we see at the end of the week or at the weekend.”

In a statement yesterday, SA Health said the new lower daily case estimate is a “good indication that South Australians are continuing to do the right thing such as staying home if unwell and keeping up with COVID-safe behaviours while out in the community”.

It also said that the lower projected hospitalisation number could be due to the BA.2 sub-variant being less severe than BA.1.

“People are also keeping out of hospital by getting treated with oral antivirals and we are using alternatives to hospital care for many people now,” the statement said.

Indoor mask mandates are still on track to be removed by next Thursday, Malinauskas said yesterday, despite warnings from doctors that it’s too early to make such a promise.

“I feel fairly confident that we should be fine for that date,” she said.