With the BA.2 Omicron subvariant set to lift South Australia’s daily COVID-19 cases above 8000, the education sector is feeling the brunt of the impact with an increasing number of staff and students absent from school.

On Wednesday, there were 778  South Australian teachers and school service officers absent for COVID-19 related reasons – up from 740 on Tuesday, 697 on Monday and 549 on Friday.

The COVID absentee rate for students is also higher-than-average at 3.5 per cent.

The Australian Education Union SA Branch this morning called for an early end to term one after releasing a survey of “more than half of SA schools and preschools” measuring the impact of COVID-19 on staffing.

The AEU says the poll shows more than 76 per cent of surveyed schools have one to 10 teachers away each day.

Around 15 per cent reported having more than 11 teachers absent each day.

Further, 87 per cent of schools reported that one to five support staff were absent each day with 75 per cent of sites having no backfill workforce available.

AEU SA Branch president Andrew Gohl said term one – which runs for eleven weeks and ends on April 14 – should end a week early.

“There needs to be some recognition or some goodwill from the department that says: ‘actually, we know how tough you have been working, we know it’s not sustainable’,” he said.

“I’m not calling for schools and preschools to close completely, I think there should be student free days, so this is actually time for educators to continue working without the risk of Omicron in the site.

“I think so much has been done on the run that we just can’t keep sustaining this.”

Education Department CEO Rick Persse, who was locked in an industrial standoff with the union in January over plans for a teachers strike, said he agreed with Gohl that “schools and preschools are under a lot of pressure at the moment”.

He also revealed there is a “possibility of having student-free days towards the end of term”.

“These are things we’re looking at,” Persse told ABC Radio this morning.

“But equally, we’ve got … to keep a really fine balance between kids’ learning, the ability of staff to deliver a quality program, and safety.”

Persse wouldn’t be drawn on the details of what an early end to term would look like but pointed to examples this year where COVID-hit schools have moved online.

“[But] we’ve got SACE requirements, we’ve equally got some schools that are just not that badly impacted, so this is the challenging [aspect] of a kind of universal state-wide blanket approach to these things.”

The Education Department is also facing a headache with a dwindling pool of temporary relief teachers (TRTs).

South Australia’s principals were assured by the Education Department in February there would be a “nimble and responsive” backup teaching workforce “available to respond quickly to local staffing issues”.

A pool of more than 4000 TRTs were put on standby.

But Persse conceded this morning that the standby workforce is “reducing” and the Education Department is “certainly utilising the bulk of them”.

“We are finding it hard to find specialist relievers in country schools and so on, there’s no doubt about that,” the Department CEO said.

“But our central teaching staff have been fantastic and have been deployed out to schools to do it.”

Asked why he was confident earlier in the year the 4000-strong backup workforce would be sufficient, Persse said: “At that time and space we were utilising less than 20 per cent of them.”

“It was quite some time ago that we were talking about that, we’ve now got cases increasing, a lot of those teachers that were available on that register have taken a contract in either the public system or the non-government,” he said.

“So that pool is reducing.

“The thing that I need to stress here is that teachers are not homogenised Lego blocks, if we’ve got a need to fill a specialist physics teacher in Whyalla, then it’s not possible to deploy a primary trained reliever from the city to be able to do that.”

Persse also said schools were “sharing amongst themselves” to address teaching shortages.

InDaily asked the Education Department how many TRTs it currently has available and what percentage is being utilised but did not receive a response before deadline.

Independent Schools Association SA chief executive Carolyn Grantskalns, whose peak body represents 105 non-government and non-Catholic schools across the state, said the independent sector is currently facing “significant issues” but would likely not support an early end to term one.

“I don’t believe that schools would be supportive of that,” she told InDaily.

“Teachers are very tired but so are nurses and others who also had to bear the strain of this, but closing schools early obviously creates difficulties for parents

Grantskalns said while COVID has had a “random” impact on different schools, the pool of temporary relief teachers remains in high demand.

“I think the pool is quite shallow, most temporary relievers are in high demand, so certainly it has been difficult for some schools to get replacement staff,” she told InDaily.

“But they’ve worked around that and certainly have as far as I’m aware been able to maintain face to face teaching for students in the main.”

Meanwhile, the Education Department has been running three-day “circuit breaker” classroom closures when more than 10 students test positive for COVID-19 in a class.

“We’ve been doing it for a while when we have a certain number of children in the class [test positive] … and then we will then check to see if there’s any other children in the class that might be positive because you we want to remove that infection risk from the classroom,” she told ABC Radio this morning. 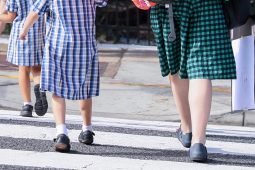 “If despite all of that, things still get worse, we have found that that three-day circuit breaker has been very helpful.”

Asked whether authorities were projecting this level of an impact on schools at this stage, Spurrier said: “I think we are where we thought we would be.”

South Australia recorded 4594 cases on Wednesday, up from 3686 infections on Tuesday, and two deaths.

The number of people in hospital with the virus slightly decreasing from Tuesday to 161.