Despite successive polls suggesting a statewide swing to Labor, many in the Liberal camp had been hopeful of sandbagging key marginal seats and hanging onto power – but a red wave instead swept those electorates and more besides.

To make it significantly worse for the party, which left 16 years in the political wilderness only four years ago, some of its key figures look set to lose their seats – possibly including Premier Steven Marshall, whose Dunstan electorate is under siege from ALP newcomer Cressida O’Hanlon.

Malinauskas said tonight in a speech to a raucous crowd comprised of Labor volunteers, MPs and luminaries that “the Liberal Party are not our enemy”.

“They may be our adversaries but they are not our enemies, and we thank them for what is a significant night for them too,” he said.

“Steven Marshall’s [concession] call was utterly generous, it was gracious and it was done with the class that we have become incredibly familiar with.

“Steven Marshall has been leader of the Liberal Party in South Australia for nine years, including four years as Premier, and that is a very significant contribution to his party and to our state and we very much thank him for it.

“Sometimes on election night when governments change hands, the successful party can confuse the elation of electoral success with an inflated sense of achievement.

“Naturally the people of South Australian Labor are right to feel elated tonight, but true satisfaction for us comes in realising our ambition, our ideal of delivering a fairer, better society and more opportunity.” 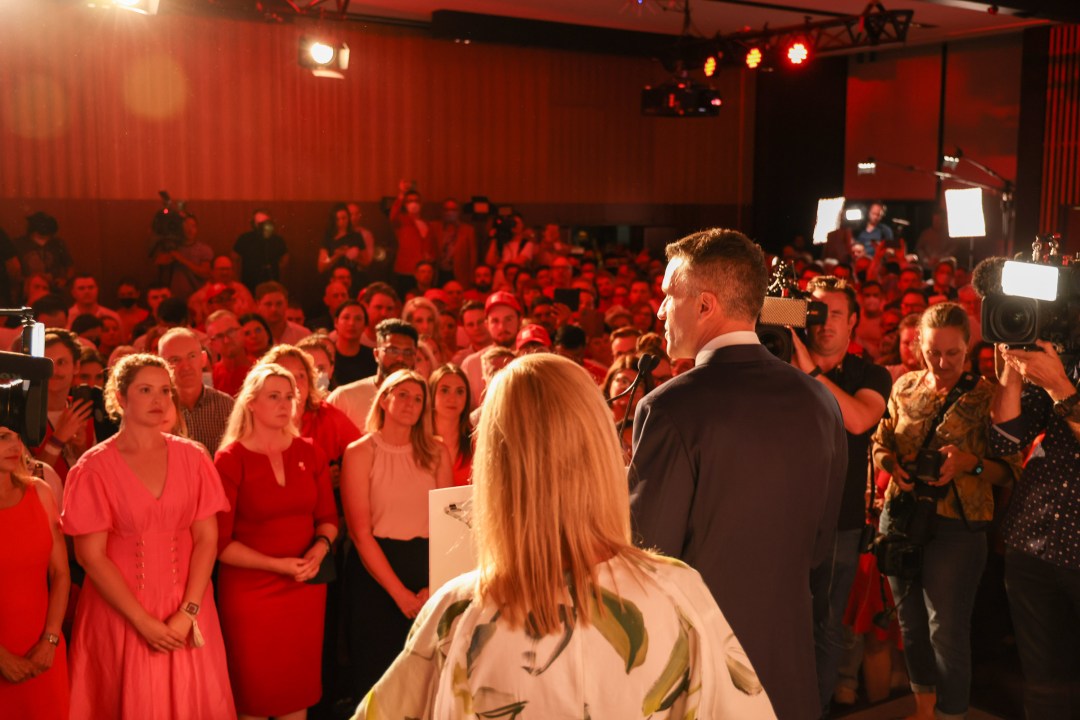 He said it was “not lost on me the significance of the privilege and the size of the responsibility that you invested in me and my team, which means for all of my MPs tonight, particularly the newly minted ones, it means that we have a big job to do”.

“At this special moment in time, we get one shot to recover from a global pandemic as a state and as a nation,” he said.

“And when we look back on this moment, in 20 years time, let them say that this generation was the new reconstruction generation.

“Let them say that we took this opportunity to deliver an economy that left no one behind.”

Malinauskas pointedly acknowledged the Kaurna people, saying that “the way we pay our respects first and foremost is not with our words but our deeds and I affirm to each and every one of you here tonight and to the state that I look forward to the first time in the history of our federation of having an initiated Aboriginal man [Kyam Maher] leading our state’s Aboriginal affairs movement but actively delivering on a state-based voice, treaty and truth for Aboriginal people”.

Malinauskas, who succeeded Jay Weatherill as leader after just three years in state parliament, said: “Every leader of the Labor Party always stands on the shoulders of giants.”

“In the case of the Australian Labor Party, those giants are millions of hardworking men and women across this country, ably represented by the Australian trade union movement,” he said.

“Tonight I do particularly want to acknowledge all those hardworking people in the health system. Every doctor, every nurse, every hospital orderly, they all serve us so incredibly well during the pandemic, but a particular shout out tonight to our ambos.”

After a campaign predicated on “fixing the ramping crisis”, Malinauskas said he wanted future South Australians to “say that when you call 000 the ambulance arrives on time”.

But it’s a bitter blow for Marshall, who led the Liberal Party to victory in 2018 after 16 years in Opposition.

Tonight, Marshall called Malinauskas to “congratulate him for becoming the 47th Premier of SA”.

“It’s been an honour, a privilege to serve as the Premier of South Australia – a great state, I love this state,” he told supporters at the Robin Hood Hotel in his Dunstan electorate.

“We came to Government four years ago… since then we’ve had fires, floods, fruit fly, coronavirus, bushfires [but] I think we leave South Australia in a better situation than we found it.”

“I think it’s great to be living in a country where we can have free and open elections.

“I feel very grateful that we live in a democracy where everybody gets their vote, and today the people of South Australia have spoken. They’ve elected a new government.

“That doesn’t take away from the work we have done in South Australia.”

He cited “record full-time employment, the fastest growing economy in the country, record investment, record export and finally in this state we have turned off the brain drain”.

Marshall did not reflect on the future of the Liberal leadership – with his former deputy Vickie Chapman in exile from the frontbench awaiting an Ombudsman inquiry report into conflict of interest allegations – but said he had “been the leader of the parliamentary Liberal Party for more than nine years [and] it’s been an honour and a privilege and a pleasure to serve this party”. 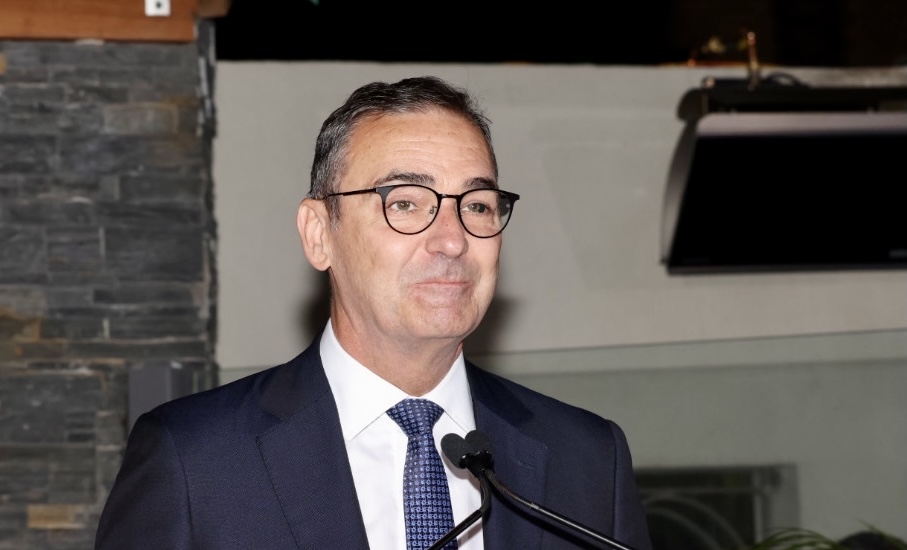 “I love my electorate – I’ve been out of it for some time, with some of the complexities of what I’ve had to do with the coronavirus but I’m looking forward to spending more time on The Parade, more time on Magill Rd, more time on Payneham Rd, with the fabulous people of this electorate,” he said.

Malinauskas will return to parliament as Premier with a host of fledgling MPs, including Lucy Hood who seized the seat of Adelaide from Liberal frontbencher Rachel Sanderson.

Hood arrived at the Labor Party’s Adelaide Oval celebrations – ironically in the Ian McLachlan Room named after the former Howard Government minister and SACA boss – to the jubilant strains of Alicia Keys’ Girl On Fire, before telling the gathered faithful: “We bloody did it – we did it.”

“It’s so difficult to defeat a first-term government, let alone one in a pandemic where we have seen incumbent governments have an advantage,” she said. 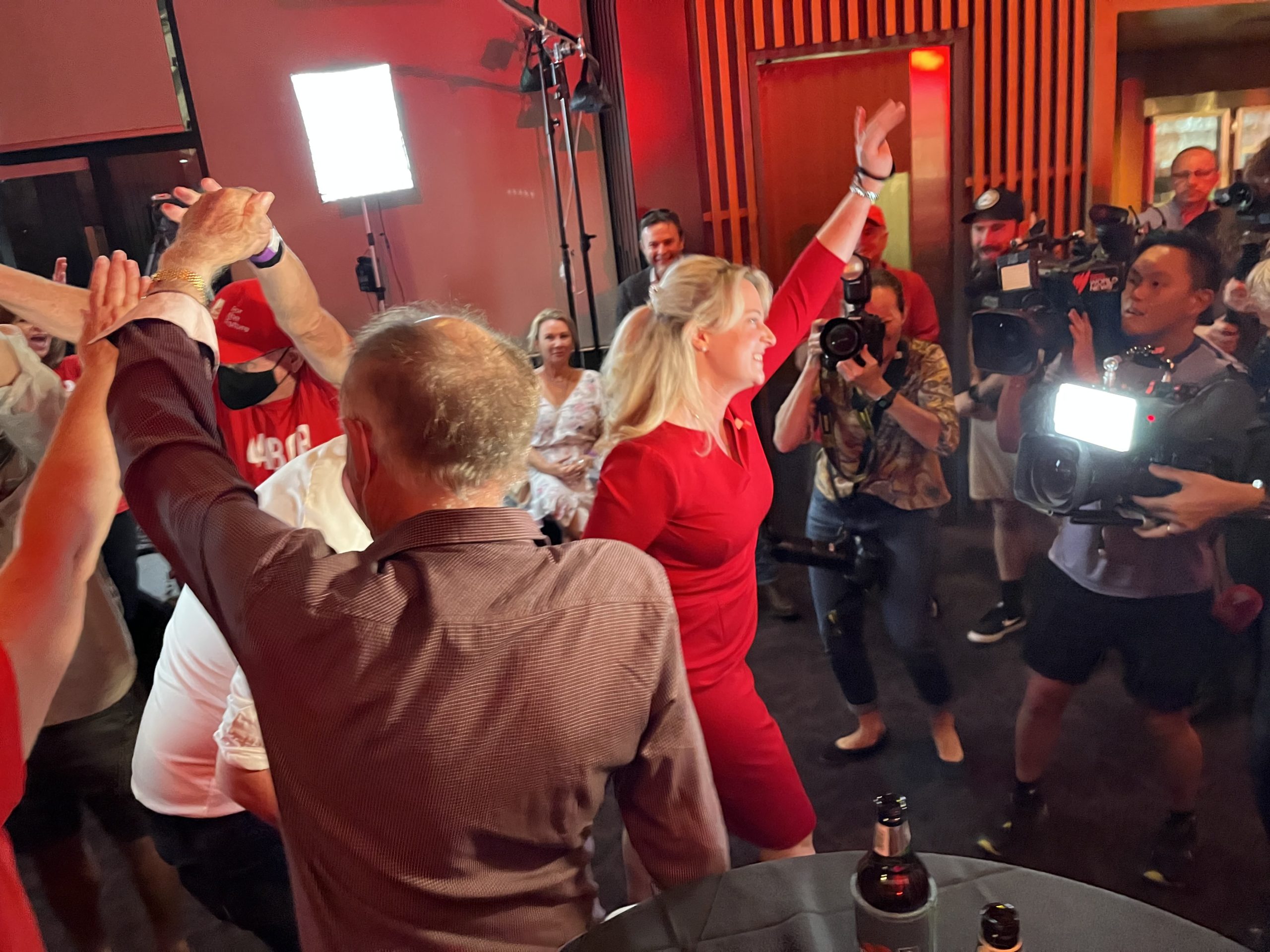 An impromptu guard of honour by Labor supporters welcomes Lucy Hood after the seat of Labor was declared for the ALP. Photo: Tom Richardson/InDaily

Despite tens of thousands of pre-poll and postal votes yet to be counted next week, Labor has declared victory in not just Adelaide but target marginals Elder, Newland and King, as well as the southern seat of Davenport – a safe Liberal seat.

That will see centre-Right backbencher and former Liberal Party president Steve Murray exit parliament after one term – but it was a different story for his former centre-Right faction colleague Dan Cregan, who was easily returned as an independent in the former Liberal stronghold of Kavel.

Independents will again feature prominently in the new parliament, with Brock and Cregan joined on the crossbench by Mount Gambier MP Troy Bell and Narungga Liberal exile Fraser Ellis – both of whom are set to face court with charges relating to alleged misuse of parliamentary allowances hanging over them.

Labor is expected to hold at least 25 seats in the 47-seat parliament – and could re-install Cregan as Speaker, giving the incoming government a commanding parliamentary position.

And key Liberals will be biting their nails about a host of other results to be confirmed in coming days, with frontbenchers Corey Wingard, David Pisoni and John Gardner all facing a tense wait for results.

Departing Education Minister John Gardner told InDaily tonight he was he was “cautiously confident” of retaining Morialta, despite a swing against him.

“It’s been a rough day for the Liberal Party across South Australia but I’m glad to have had the support of a very good number of people in Morialta and I expect that especially as the postals and pre-polls continue to come in that it will remain a Liberal seat,” he said.

On the election loss he said: “Clearly it’s not the outcome that we were hoping for but I think there’s a lot to be proud of in the work that the Liberal Party has done over the last four years.”

Asked if Steven Marshall should stay on as leader of the party, Gardner said: “That’s a matter for Steven Marshall tonight. We’re obviously taking in these results and there will be opportunities to reflect on them once we’ve had the further results come through in those postal and pre-poll votes.”

Then there’s the ultra-safe seat of Finniss, where independent Lou Nicholson is a strong chance of a major upset. First-term Liberal frontbencher David Basham is facing a difficult battle to hang on.

Nothing fell the Liberals’ way – in Labor’s most marginal seat of Mawson, Leon Bignell coasted home with a dramatically increased majority. 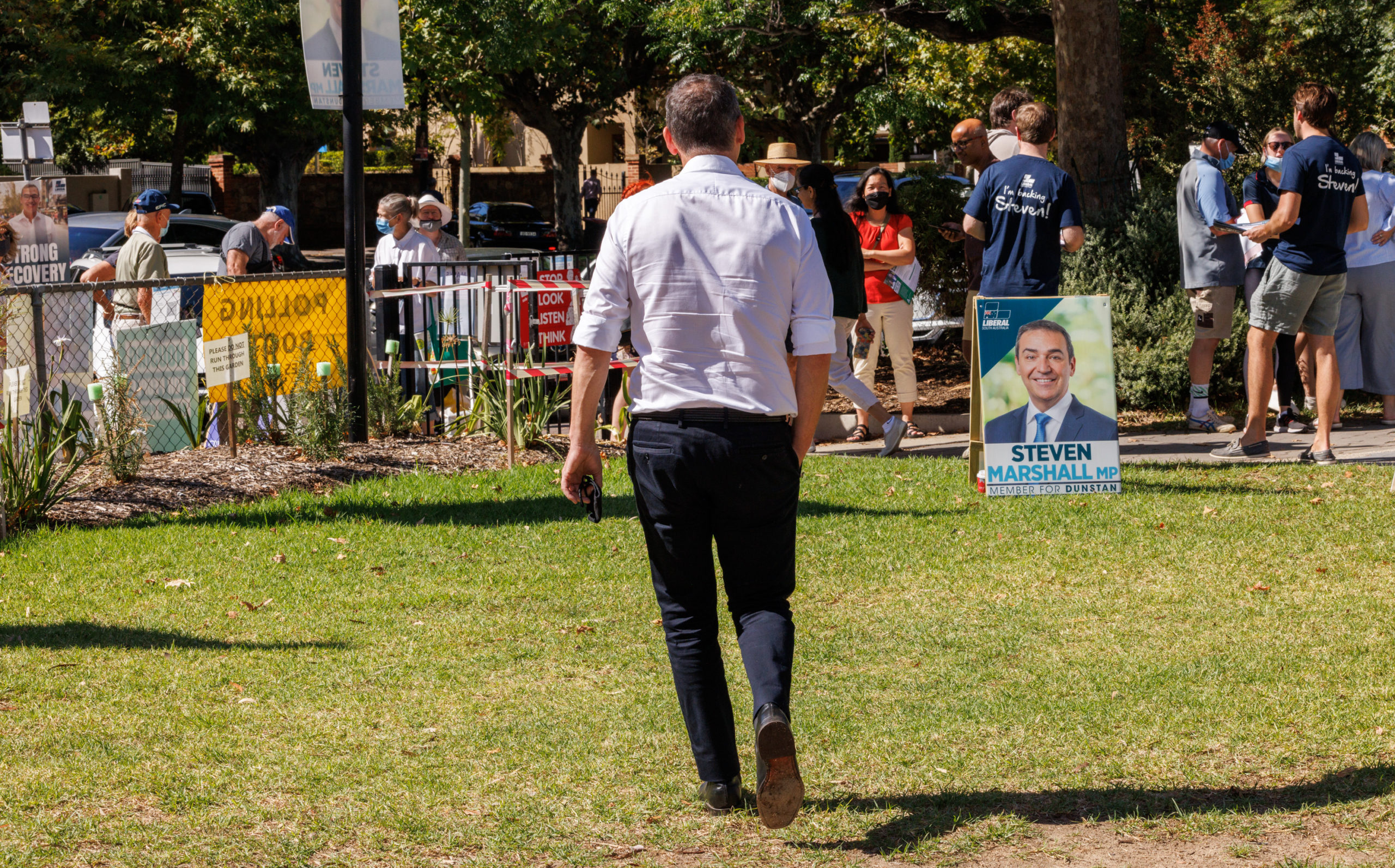 For the Liberals though, a period of reflection looms as to where it went wrong – just months after riding high on its management of the COVID pandemic.

Asked if it was the government’s performance on health that cost the Liberals the election, he said: “There were certainly a lot of issues running in the election. The party will now need to sit down and work through our forward plan.”

“Let’s let the paint dry on the results and see the composition of the party room and we’ll get on with the next term,” he said.

Wade said he “certainly did not” predict such a landslide loss.

“The feeling on the ground wasn’t reflected in the results, so these are things we need to work through.”

“You never expect that, but ultimately I don’t think it will be as bad as some of what’s being said,” he told InDaily.

“I think the postal is up to 40 per cent of votes still to come in… so I don’t think we’ll lose as many seats as some of the commentators are predicting.

“We’ll hold on to some of our important seats and we’ve equally got some outstanding new talent coming into the party, which will be great.

“We’ve got some good young talent coming in, which is important to the party regrouping.

“I thought the Premier’s speech was remarkably gracious and a good summary of his proud achievements.

“The people have spoken, we accept the decision and we’ll sit back and hope [Labor] can achieve what they said they were going to achieve.”