The 4474 new cases reported yesterday is the highest daily total since January 17 and follows the scrapping of a number of COVID-19 restrictions over the long weekend, including all density limits and bans on singing and dancing.

“We have a committee and we all put forward information and so I’m not going to answer yes (or) no to that,” she told ABC Radio Adelaide.

“It really is a very open discussion about where we are up to in the pandemic about economic, social impacts and also health impacts.

“We discuss it in a very respectful and an adult way and I bring new information about the new variant to the table about what our case numbers are doing, how our hospitals are stacking up and then decisions are made and advice is provided to our commissioner.

“It’s a very difficult job that he’s got you can imagine with all this sort of information going forward.”

It comes after Stevens in December opted against reimposing hard border restrictions on the eastern states following the emergence of the Omicron variant – despite conceding he was advised to do so by Spurrier.

The decision was widely criticised following a surge of COVID-19 cases that forced many into isolation over Christmas. Since borders opened on November 23, 224 COVID-related deaths have been recorded in SA.

Stevens also overruled health advice earlier in December when he relaxed density limits on hospitality venues, with Spurrier at the time saying it was “very tricky” to assess the risk of the decision.

On radio this morning, Spurrier said SA Health was adjusting the state’s modelling to take into account the fact the new BA.2 Omicron COVID-19 subvariant is more transmissible than older variants, with authorities also expecting an increase in cases after relaxing restrictions.

She reiterated that she was primarily focussed on monitoring the hospitalisation rate rather than the daily caseload, adding it was a concern that the number of people with COVID-19 in hospital had increased over the past week.

SA Health reported yesterday that there were 132 people with COVID-19 in hospital, including eight in intensive care and three on a ventilator.

Three people died, including two women aged in their 80s and a man in his 40s.

But Spurrier ruled out reimposing restrictions for the time being.

“We would really not want to have to put those public health and social measures back in place and we’ve just got to see how much mileage we can get out of the vaccination, which is why I’m pushing that third dose,” she said.

“We’re just going to have to keep monitoring.”

Spurrier said the number of people in quarantine was “starting to be a significant number”, with 19,541 active COVID-19 cases in the state, with each of those on average having between three to four household contacts.

The rise in the number of people in isolation comes as South Australians are due to head to the polls tomorrow.

The deadline to apply for a postal vote closed yesterday, with voters having until 5pm next Friday to return their ballot.

Those who test positive for COVID-19 today or tomorrow and who missed out on applying for a postal vote must register to collect a voting pack from one of 22 testing sites across the state that are staffed by trained SA Health and SA Police workers.

Fears COVID-positive regional South Australians will miss out on voting 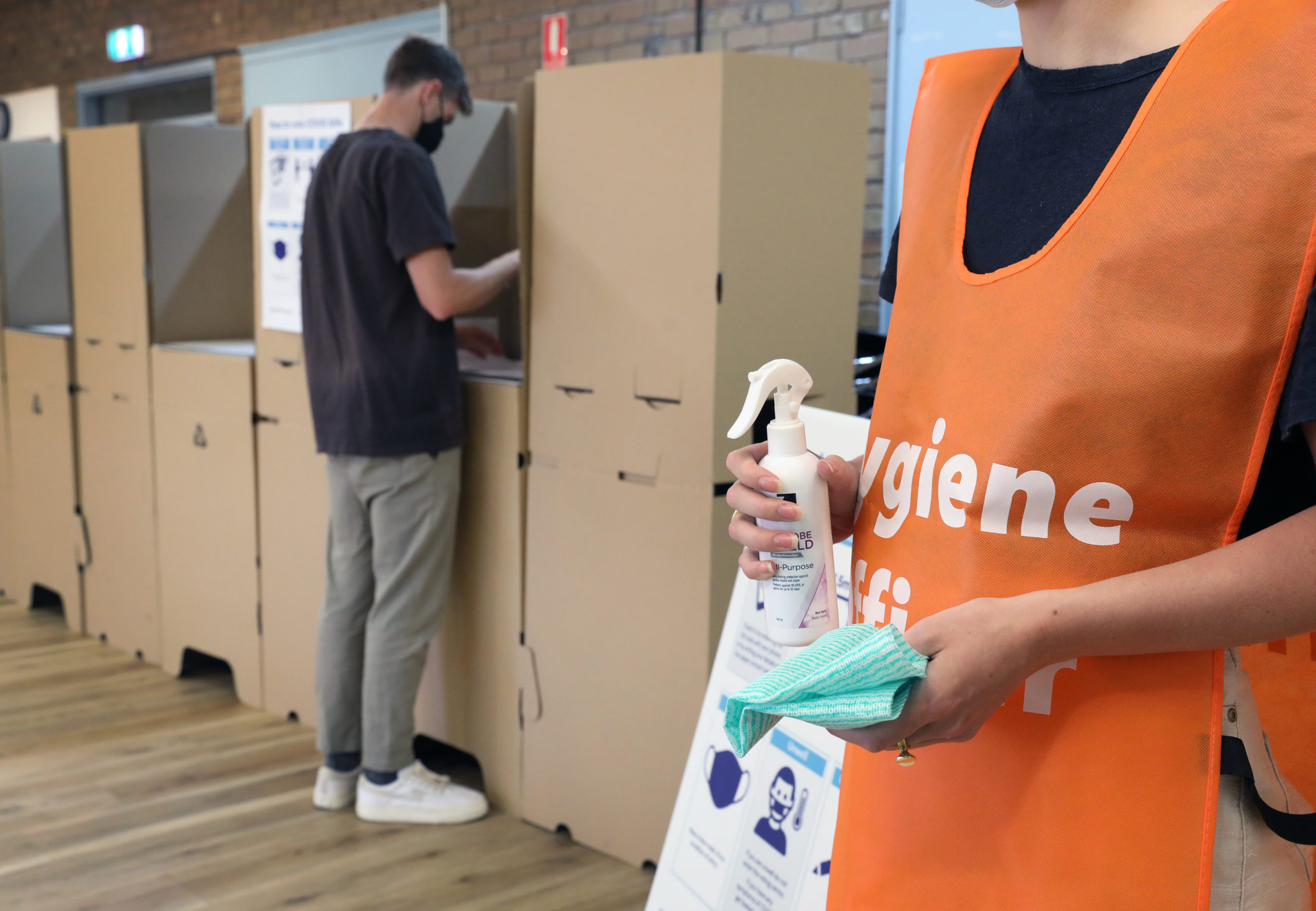 Concerns have been raised about how COVID-positive voters in regional South Australia will cast their ballot, given many will be forced to travel hundreds of kilometres to pick up voting packs.

SA Nationals president Jonathan Pietzsch said several towns across the state were currently experiencing COVID outbreaks, with some COVID-positive regional voters being told by the Electoral Commission that they would be exempt from voting.

“In Tintinara for example, people have to travel 100-kilometres each way to either Bordertown or Tailem Bend, potentially with a car full of sick kids (to pick up voting packs),” he said.

“We’ve just been contacted by people on the west coast in Streaky Bay, where a lady’s been told in order to get a ballot paper she has to drive to Port Lincoln, which is 300-kilometres away.

“She’s been told she doesn’t have to vote and she’s furious.”

Pietzsch said he was concerned that “a reasonable proportion of the population won’t be able to vote in some places”, with up to 10 people from across the state contacting his party over the past 24 hours expressing concerns about how they would vote.

“MacKillop where I am is a safe seat – we’ll obviously see tomorrow whether that’s the case or not – but in Port Lincoln in (the electorate of) Flinders, there’s a decent spread of candidates over there and it could have a ramification if it came down to preferences,” he said.

“Obviously a lot of the country seats are more safe than metro seats, but if anything does go to preferences it could be a significant concern as to whether it was an accurate reflection of the vote.”

Streaky Bay resident Amber Brown tested positive for COVID-19 on Tuesday and submitted an application for a postal vote, but she said she is yet to receive her ballot in the mail and is worried she won’t have enough time to return her ballot by next Friday.

She said Streaky Bay has a testing site, but it hasn’t been supplied with voting packs, meaning residents who test positive for COVID-19 today or tomorrow, or who didn’t apply for a postal vote, must travel to Port Lincoln.

“When they (the residents) rang the hotline to say that Port Lincoln was too far and could they organise something else they were just told that they would be exempt from voting and they won’t get a fine,” she told InDaily.

“The other thing people are being told on that hotline is that they can let their local polling booth manager know that they’re unable to vote because they’re in isolation or they’re unwell, but then they’re not voting.

“I don’t have numbers on how many people in Streaky Bay are in isolation but with school absences I know there will be a lot of families that won’t get down to vote.”

Both Pietzsch and Brown called on the Electoral Commission to extend postal voting to allow those who test positive for COVID closer to election day to vote without having to travel long distances.

“Every vote matters and I’m afraid it’s just one more message to rural people that their voice won’t matter when their voice does matter,” Brown said.

In a statement to InDaily, a spokesperson from the Electoral Commission acknowledged that some voters might need to travel “some distance” to collect their ballot backs depending on their location and their enrolled district.

They said being unwell with COVID is a valid and sufficient reason under the Electoral Act to request an exemption.

“If the elector has to travel a significant distance to collect their ballot pack for their designated PCR Testing / RAT Collection point, and they are unwell, they are encouraged to call ECSA on 1300 655 232 so alternative arrangements can be made,” they said.