The Marshall Government’s election campaign has been largely predicated on calling for Labor to reveal the budget impact of its election pledges – with Mullighan finally obliging today.

With listed spending commitments running to $3.118 billion, Labor insists it can retain a surplus budget, with vaguely-specified savings initiatives – a hallmark of its previous tenure in government as well as of the past four years under the Liberals – identified to offset the spending impact.

As with outgoing Treasurer Rob Lucas’s campaign costings released earlier this week, the state’s already soaring debt will also rise to accommodate investment, with an overall budgeted increase of $243 million.

But half the spending will be funded, Mullighan insists, through “$1.5 billion of the $2 billion in uncommitted capital reserves held in the budget”.

That’s despite confessing the Opposition has “no line of sight” as to the true budget position, with the Marshall Government attributing many of its election commitments to funds already budgeted through the cabinet process, since December’s Mid-year Budget Review.

Mullighan says the savings initiatives will save $713 million over four years – but insists “frontline services” will not be impacted.

An “efficiency dividend” of 1.7 per cent will be applied to a range of departments, excluding Health, Education, Police, Child Protection, TAFE, Courts and Emergency Services.

The traditional target of public service executives are also in Labor’s sights,  with a $41.5 million cut over four years, “which equates to 50 staff on an average of $200,000 per year”.

“This represents a 10 per cent reduction in these numbers,” he said.

But asked why voters should believe the efficiencies can be realised given successive governments have struggled to meet them, he said: “That’s not true.”

“If you’re ambitiously applying initiatives to agencies that have struggled to deliver them, such as education, health or police, you’re setting yourself up to provide additional funding to those agencies in the future,” he said.

“We’re deliberately not doing that, with our savings pertaining to those areas that are not delivering frontline services.”

As to where the savings would be targeted, “we’re maintaining the position that the current Liberal Government has had and the previous Labor Government has had, that it’s up to the chief executive as to how they achieve these savings”, he said.

“Our expectation is that frontline services will be exempted.”

He suggested areas such as office accommodation and travel would be ripe for savings, particularly in the aftermath of the COVID pandemic.

“There are plenty of areas to save money,” he said, citing a recent Premier’s Department spend on bolstering its communications team – and arguing that money would be better spent on frontline health workers.

As often argued, $662 million of Labor’s promises are funded by its decision to axe the Liberals’ city arena, although the bulk of that spending is outside the forward estimates.

“What we’ve always said is we won’t be delivering a basketball stadium – we’ll be bringing that money forward into the forward estimates, and spending it on health,” Mullighan argues.

Defending the unorthodox approach, he insists that “whether the money’s going to be spent in 2023, ’24 and ’25, or ’25, ’26 and ’27, taxpayers still need to fund that… they’d still need to borrow money to fund that basketball stadium”.

“We have been careful with our costings to make sure the budget can accommodate them, and we can still deliver budget surpluses,” he said. 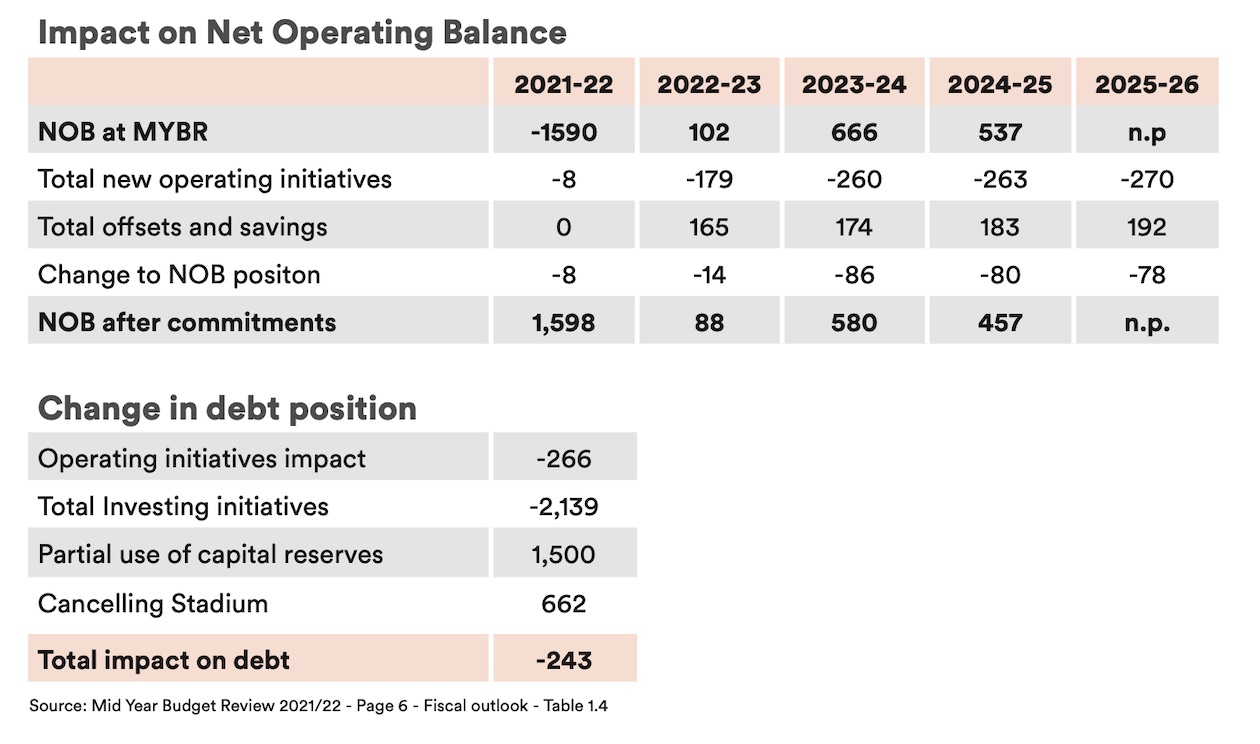 An extract from Labor’s costings

Lucas seized on the document to accuse Mullighan of “rookie errors”, saying he had misunderstood Treasury advice delivered during last year’s budget estimates about the size of the contingency fund – which he said was earmarked only for transport-related projects that would be co-funded by the Commonwealth.

“Transport-related projects are in many cases 80 per cent federal funded [whereas] health and hydrogen projects have to be 100 per cent state funded,” Lucas told reporters.

“That’s just blown completely the investing capital works projects out of the water… the only way $3 to $4 billion of promises can be funded is through a massive increase in revenue: taxes, charges, levies, the removal of exemptions and the like.

“These are rookie errors by a rookie leader and a rookie shadow treasurer.”

Lucas said if Labor was elected “the first thing Treasury will say to them is ‘I’m sorry, there isn’t $2 billion sitting behind a sofa to spend on a hydrogen plant or to spend on all these health projects – you’re going to have to raise the money some other way to fund these projects’”.

But Labor says its “fully costed election commitments” have been reviewed by Canberra-based auditors Charterpoint, which declared the models “mathematically accurate” with “appropriate and reasonable supporting assumptions”.

Mullighan insists that the committed $3.118 billion of spending “essentially represents what the first post-election budget will be”, arguing it was “blatantly hypocritical for the Government to be saying we’re spending too much money”.

“We’re proposing to spend less money than they committed to in their first budget after 2018,” he said.

“Their entire attack has been completely disingenuous.

“All our policies have a cost attached to them – they’ve been independently assessed by an external independent accounting firm and we’re happy to stand by them.”

Labor today sharpened its focus on ambulance service recruitment ahead of the party’s long-awaited announcement on election costings.

Off the back of their pledge at the start of the campaign to fund an additional 350 ambos, the Opposition today announced it will offer more than 100 SA Ambulance Service internships each year to graduate paramedics, up from the current rate of 48.

Annual paramedic student placements at the SAAS would also increase from 120 to 140 by the end of Labor’s term under the policy.

The Opposition says they will also pursue a business case for the construction of a “new modern training facility” for university paramedics.

“What’s important for people to be aware of is that currently not all those people who graduate from the paramedicine course here at Flinders University end up getting jobs in the South Australian Ambulance Service,” he told reporters.

“In fact, only about half do.

Premier Steven Marshall, meanwhile, today said the Liberals already had “runs on the board” as it had reduced ramping by nearly 50 per cent over the last four months.

He declared the Liberals “will end ramping” – a marked difference to Labor’s pledge to “fix the ramping crisis”.

“The Liberals will end ramping while Labor are putting up the white flag,” he said.

“Ramping has increased right across the country but we took action in last year’s budget.

“We put in further resources regarding urgent mental health care, regarding our virtual care centres, our PCCs (priority care centres) across South Australia.

“All of these programs are now starting to bear fruit.” 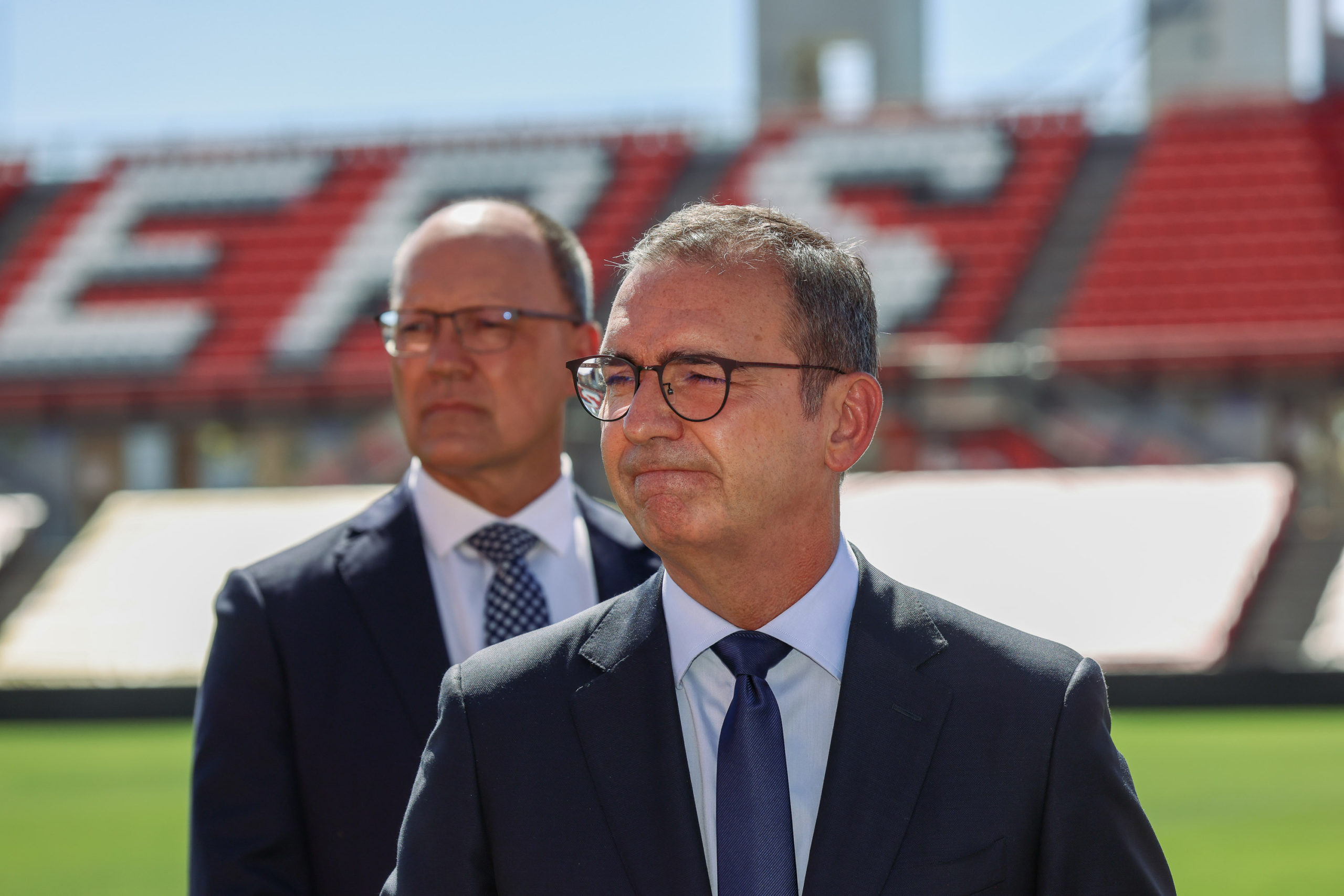 Sport Minister Corey Wingard said the upgrades met FIFA standards, but he was unable to say whether the Matildas would end up playing in Adelaide during next year’s Women’s World Cup.

“You wouldn’t be Einstein to suggest there would be other places around that could be a preference for the Matildas, but we’re happy to take whichever teams come here.”