Marshall and Howard toured the Modbury Bowling Club in the battleground seat of Newland to spruik the Liberals’ economic performance.

Howard, who served as Prime Minister from 1996 to 2007 and is widely cited as one of the Liberals’ most popular leaders, enthused about Marshall’s time in government, saying South Australia had “come out of the slow lane” and was now “humming”.

“He (Marshall) has put South Australia back on the national map economically,” he said.

“It was always a wonderful place, it always produced some tremendous federal representatives that I dealt with. I mean, during the time I was prime minister South Australia had the strongest ever representation around the cabinet table.

“But the truth is that Steven Marshall has turned around South Australia’s economy.

“They said it couldn’t be done, but he’s turned it around.”

However, new polling released this morning shows the Liberals are trailing Labor on a two-party preferred basis.

The Advertiser-YouGov poll of 835 voters, published this morning, shows Labor clearly ahead of the Liberals 56 per cent to 44 per cent.

Labor leader Peter Malinauskas is ahead of Marshall as the state’s preferred premier at 45 per cent support compared to 40 per cent. 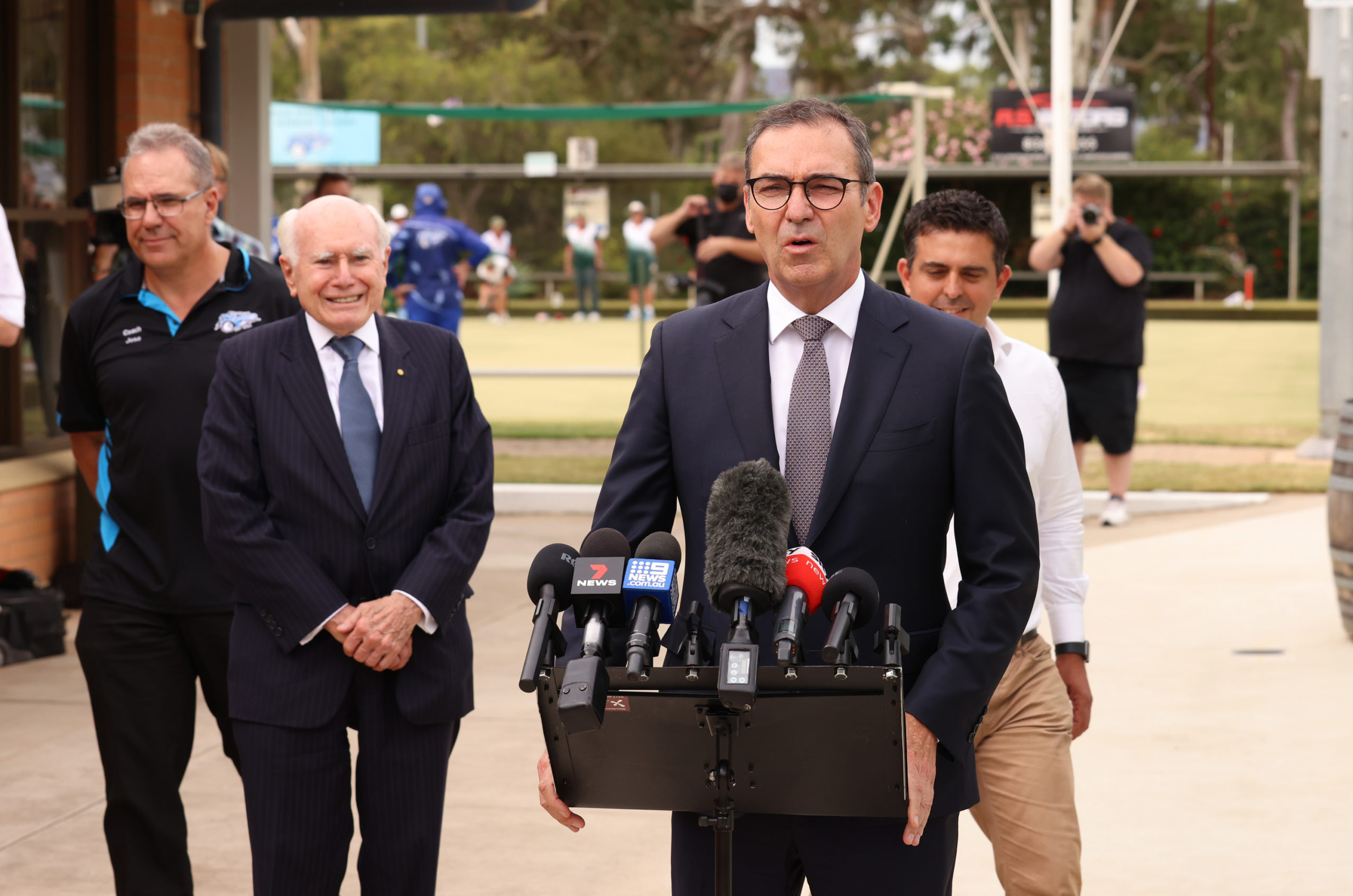 Asked why he thought Marshall was behind in the poll, Howard said: “This passion to analyse the polls as if they are the last word, I mean, I’ve seen a lot of polls and I’ve been buffeted by them in the past.

“What I know is they can often be a very poor guide and even more so when they are statewide.

“Tune in on Saturday.”

Marshall, who described Howard as a “strong supporter and mentor”, also dismissed the poll.

“In the lead up to the last federal election the polls showed that (former Labor leader) Bill Shorten was going to become prime minister,” he said.

“I think he’d loaded up the trailer, he was headed to Kirribilli and he had to do a U-turn halfway there.

“The reality is, the election is on Saturday.”

Harvey dismissed the hotly-contested battle, saying elections were “always tight” and the Liberals had “really delivered for the northeast”.

“I think elections are always going to be close and we’ll just keep working hard,” he said.

The poll came as both sides of politics this morning joined the federal and state presidents of the Australian Medical Association to launch the South Australian chapter of the AMA’s Public Hospital Report Card 2022.

“Our report card that we are releasing the South Australian chapter of today does not paint a pretty picture when it comes to South Australian hospitals,” AMA federal president Dr Omar Khorshid told reporters.

“Performance is continuing to decline across the country but unfortunately South Australia continues to languish below the national average on the measures in our report card.”

Asked whether his government’s performance on health was the reason why Labor was ahead in the poll, Health Minister Stephen Wade said: “I think South Australians appreciate that health is a complex area”.

“It’s doubly complex in a pandemic environment. Hopefully we are coming out of the Omicron wave and we’ll continue to manage the COVID pandemic well,” he said.

“There are always issues in health. The Marshall Liberal Government continues to prioritise health. The $1.38 billion that we’ve invested in health is an annual additional investment is the equivalent of two entertainment centre expansions.

“We show that we are willing to invest in health. We are giving health a priority, we have right through our government. And in relation to our election commitments, more than half of our commitments are health-related.”

Asked if he was worried about the poll, the Minister said: “I don’t comment on polls, I just campaign for elections. This government has a very proud record across a whole range of domains. We look forward to the people of South Australia making their judgment on Saturday.”

“Under the Labor Party we were the worst in the nation,” he said.

“We are at least moving towards the middle of the pack.”

Opposition Leader Peter Malinauskas also refused to be drawn on the poll.

“Opinion polls are going to do absolutely nothing to fix the ramping crisis,” he said.

“The only way we fix the ramping crisis is change the government and put a new team in charge who actually has a plan to do something about it.”

Malinauskas said “the health policy of this government has descended into lunacy”.

“What we can’t have is more of the same and that’s the choice that’s on the ballot box,” he said.

Another death linked to ambulance delays

The release of the AMA’s report card came amid another death linked by the paramedics’ union to ambulance delays.

The union said a man in his 50s died last night after waiting two hours for an ambulance that should have arrived in 16 minutes.

It’s the fifth death in just over a week linked by the union to ambulance waits.

The SA Ambulance Service is investigating all five cases.

Commenting on the latest death, Wade said: “My sympathy certainly goes to the family and friends of the gentleman who lost his life.”

“I think it’s important to highlight that this particular patient deteriorated while they were waiting,” he said.

“As soon as it was upgraded to a Priority One case the ambulance responded within eight minutes.”

Malinauskas described it as “the human tragedy of Steven Marshall’s health crisis”.

“It is about time that Steven Marshall stopped pretending that everything is OK,” he said.

“This is the most concerning question that South Australians have to confront at this election.”

Labor has made health a focus of the election campaign, announcing large spending in the area, which the Liberals have described as “reckless” and questioned how Labor will pay for it.

The Government has also said it’s already invested record spending in the portfolio during its term.

The AMA this morning refused to say which party had a better health policy.

“I’m not here to tell South Australians how to vote,” Khorshid said.

“What I’m here to do is to point out where our health system is at so that South Australians are informed when they go to the ballot box and they can make their own decisions about which party has the best health policies.”

Asked if Labor’s announcements were enough to fix the hospital log-jam, Khorshid said “it’s certainly pleasing to hear announcements from a potential alternate government to better invest in healthcare”.

But he said Labor’s commitments on their own wouldn’t be enough to completely fix the system.

“Unfortunately what is needed in healthcare is major investment and system reform,” he said.

“That starts with primary care, with actually looking at how do we manage chronic diseases in the community, how do we support general practitioners, nurses and allied health professionals in the community to look after people so they don’t need to go to hospital.

“It’s not that emergency departments are too small, it’s not that there aren’t enough ambulances on the road, it’s that our hospitals are jammed up from the back door to the front door.

“We can’t get people out of those hospital beds and into aged care and the disability system because those systems are not working properly either. So the whole system is jammed up and we need an emergency solution through funding and through reform in order to address that.”