The ABS figures released yesterday showed Adelaide’s property market growth was slightly above the national average of 23.7 per cent, but behind Hobart (up 29.8 per cent), Canberra (28.8 per cent), Brisbane (27.8 per cent) and Sydney (26.7 per cent) for the year.

The average or mean price in South Australia in the December quarter grew to $614,300, which tied it with WA but put it well behind the national price of $920,100.

House prices rose 27.5 per cent through the year, while prices of attached dwellings rose 14.0 per cent.

“Results were consistent with a range of housing market indicators. New lending commitments for housing rose to a record high value in the December quarter 2021,” she said.

The ABS began its Residential Property Price Index series in the September quarter 2003.

The value of residential dwellings has risen more than $2 trillion since the December quarter 2020. 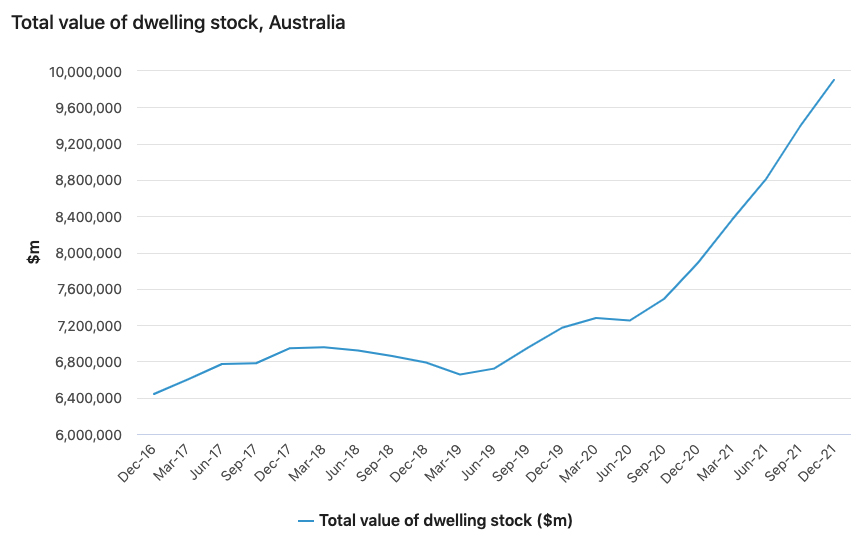 Last month the Real Estate Institute of South Australia released its December quarter report, which showed there were 7822 house sales statewide for the quarter with a median price of $515,000.

Using figures from the Valuer-General, the report found that 5319 of the sales were in the Adelaide metropolitan area where about a dozen suburbs achieved annual growth rates of more than 50 per cent.

While Adelaide’s price growth has outpaced several interstate rivals in the early months of 2022, the overall boom appears to be losing steam.

According to CoreLogic’s national Home Value Index for February, Adelaide recorded a 1.5 per cent growth in dwelling values for the month, 6.4 per cent for the quarter and 25.8 per cent for the past year.

Nationally, the CoreLogic index gained just 0.6 per cent in February as a result of flat markets in Sydney and Melbourne.

CoreLogic’s director of research Tim Lawless said every capital city was now recording a slowing trend in value growth, albeit with significant diversity.

“Conditions are easing less noticeably across the smaller capitals, especially Brisbane, Adelaide and Hobart, where housing values rose by more than 1 per cent in February.”

Labor’s housing spokesman Jason Clare has argued for years that there is a housing crisis.

Labor has promised a $10 billion Housing Australia Future Fund to build social housing and affordable housing should it win the federal election due in May.

But Prime Minister Scott Morrison reminded voters at the weekend that since the last election, his government had helped more than 300,000 Australians into their home by helping them reduce the size of their deposit from 20 per cent to five per cent.

Last week, the Housing Industry Association called for housing and home ownership to be a priority whoever wins the election.

It estimates that 1.66 million houses will need to be built by 2030 just to keep up with the demand from population growth.

The HIA wants land supply unlocked through speedier zoning, subdivision and development processes across all states and territories.

The association also believes there has been an underinvestment in social and community housing that has persisted for decades.