Chapman’s future as Attorney-General under a Marshall Government remains under a cloud while SA Ombudsman Wayne Lines probes her decision to veto a major port project on her native Kangaroo Island.

Lines’ inquiry, launched in November, is considering whether the member for the blue-ribbon Liberal seat of Bragg had a conflict of interest or breached the ministerial code of conduct when she vetoed the project.

It also is considering whether any other public officer, including Premier Steven Marshall, had a role in influencing Chapman’s decision.

The inquiry prompted Chapman to stand down as Deputy Premier and Minister for Planning and Local Government in November, but she retains the title of Attorney-General despite the roles and functions of the position being handed to former speaker Josh Teague.

The Attorney-General is, of course, Vickie Chapman at the moment

Lines did not respond to questions from InDaily yesterday asking when he would hand down his long-awaited findings, which could cause major repercussions for the election if dropped before the March 19 polling day.

But when asked if he was concerned about the timing during a press conference to spruik a new state and federal-funded plant-based food venture, Marshall told InDaily: “no, we welcome the Ombudsman’s inquiry and we look forward to that report being handed down”.

He also refused to speculate on Chapman’s future as Attorney-General, saying he would announce his new cabinet after election day.

“The Attorney-General is, of course, Vickie Chapman at the moment”, he said.

“We’ll announce our cabinet after the election.”

The comments sparked criticism from Labor this morning, with shadow treasurer Stephen Mullighan accusing Marshall of not giving “clear answers” on who his Attorney-General would be.

“Today he said it’s Vickie Chapman, which must be news to Josh Teague who has been allegedly doing the job since she resigned amid the KI scandal,” he told InDaily.

“The real reason Steven Marshall can’t give a straight answer to these questions is the Liberals are a divided rabble and he is terrified about sparking a fresh round of internal warfare.”

The Marshall Government is also keeping quiet on a successor to Treasurer Rob Lucas, despite narrowing the field of candidates down to those who sit on the budget cabinet committee, including Marshall, Energy Minister Dan Van Holst Pellekaan, Environment Minister David Speirs and Education Minister John Gardner.

Lucas told reporters yesterday that the committee members had been “actively involved” in budget decisions and he was confident they would perform well in the role.

“Because I knew I was retiring this time, the budget cabinet committee… has now been involved consciously by me in a whole series of the detailed thinking and reasoning behind and options behind all of the major decisions that we’ve taken over four years,” he said.

“Anyone who’s served on the budget committee for four years is going to be much better prepared for being Treasurer than frankly I was when I was asked to do it in ’97 having been the education minister and (former Premier) John Olsen rings me up one night and says, ‘you’re going to be the Treasurer’.”

Asked if he had put forward a recommendation for his successor, Lucas said: “no, that’s not my decision”.

“I’ll be off in a retirement home somewhere,” he said.

“It’ll be a decision for whoever’s the elected Premier.”

Following nine-straight days of campaigning on health and ramping, Opposition leader Peter Malinauskas today said an elected Labor Government would spend $40 million over four years in a bid to bring new events to the state.

The funding, Labor says, will target fixtures from the major sporting codes including the English Premier League, Major League Baseball and the National Football League, along with Socceroo World Cup qualifiers and the finals of the 2027 Rugby World Cup.

In the Arts, Labor is hoping to attract “Broadway blockbusters exclusive to Adelaide” and “major arts exhibitions” similar to the New York Museum of Modern Art exhibition held in Melbourne. 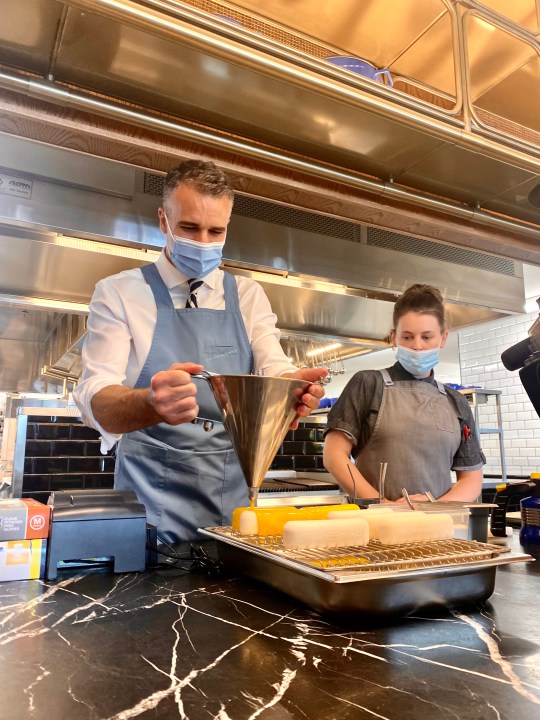 Malinauskas on the campaign trail today.

The Opposition have also listed “major conventions” and “major festivals” on their events wish list, despite running a campaign against the $662 million Riverbank Arena, which the Liberals claim is key to attracting conventions South Australia has previously missed out on.

Questioned about whether SA could attract “major conventions” without the arena, Malinauskas said: “We think we can get far better bang for our buck through tourism marketing and also growing the hospitality sector generally.”

“We know that South Australia has outstanding capacity to host major events in a range of different forms,” he told reporters today, listing the Adelaide Oval, the “streets of Adelaide”, the Festival Centre and the Entertainment Centre as “elite facilities”.

“The Riverbank Arena, people should remember, is set to have a capacity of 15,000 people, that’s only 3500 people more than the Entertainment Centre and it’s only a couple kilometres up the road.”

The $61.6 million package also includes $20 million over two years for tourism marketing and a $1.6 million grant over four years for the Tourism Industry Council to provide “capability building” through business coaching and tourism workshops.

Marshall’s media focus today was to spruik a new state and federal-funded plant-based food venture, signed off before the election campaign, which he said would generate 3000 local jobs.

The party said it would also work with federal parliamentarians to pursue legislation that would allow older Australians to work without impacting their pensions.

– with additional reporting by Tom Richardson