The changes this month, which will extend super to 200,000 low-paid female workers with average retirement savings of just $12,000, were welcomed by the superannuation industry.

“Including women, who make up two out of three of those impacted, many of whom work in two jobs just to make ends meet,” she said.

Bernie Dean, CEO of Industry Super Australia, said abolishing the threshold will remove a “structural inequality” that discriminated against those on low incomes.

“It is a welcome first step towards addressing retirement inequality,” he said.

The new laws also help retirees by dropping a work test for those aged between 67 and 74 who will now be able to make non-concessional super contributions.

However, if they want to claim a tax deduction for their contributions they will still need to pass a work test.

In another move, the Senate voted down new regulations that would have effectively banned proxy adviser companies with overlapping ownership to the industry super fund movement from operating.

That will allow the Australian Council of Superannuation Trustees to continue advising super funds as to how they should vote on resolutions put to company meetings. 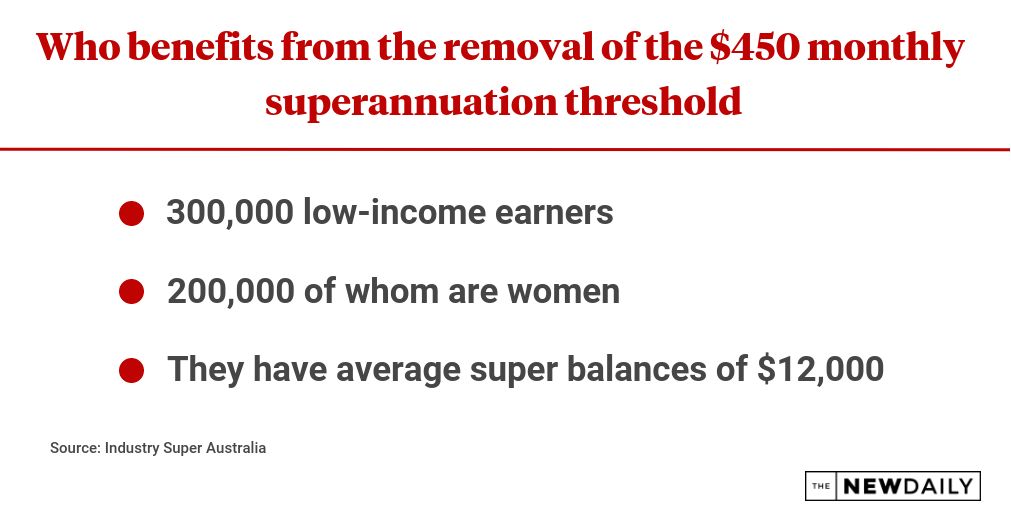 Although the move has been welcomed by superannuation advocates more needs to be done to boost the incomes of older people, they said.

Research from Monash University in 2016 found 34 per cent of women over 60 lived in poverty, while the figures for men were 27 per cent and 24 per cent for couples.

Ian Henschke, chief advocate for National Seniors Australia, said those figures had not changed much since then.

“If you are on a full pension with no private income and you work one or two days a week, you lose 50 cents on the dollar from your pension and you have to pay income tax,” Henschke said.

That is because under current arrangements those on a full pension can only earn an extra $240 a week before their pension is cut.

This figure includes a $150 weekly work bonus, along with $90 in income allowed to be earned above the pension.

“The pension is taxable income, so once you hit those upper limits you start to pay tax on it,” Henschke said.

National Seniors wants the income test on the age pension to be abolished.

That is effectively the case in New Zealand, where the pension is open to all and the result is many more older Kiwis are still in the workforce.

“In Australia only 2.9 per cent of pensioners, that is 76,000 people, are in the workforce,” said Brendon Radford, manager of policy and advocacy at National Seniors.

In New Zealand, the figure is 24 per cent of those over 65, with similar numbers in the US, Canada and Sweden. 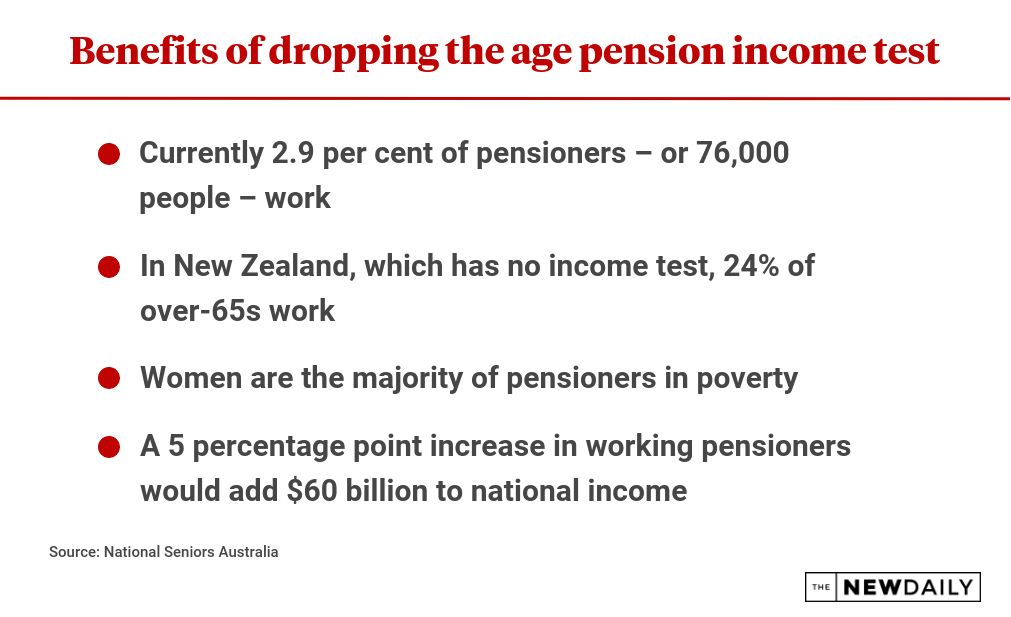 In Australia that rate of working pensioners is actually falling and that puts more pensioners into poverty, Henschke said.

Dr Radford said those who could work without penalty under the work bonus are discouraged because it involves fortnightly reporting to Centrelink.

“The system is clearly not encouraging people to work,” he said.

“They can’t stand the rigmarole of that reporting, so they choose not to work.”

The figures for Australia quoted above are artificially low because they don’t include those over 65 who work, but don’t claim the pension.

However, if they are added in the total number of workers over 65 is only 15 per cent above that figure, still well below those foreign examples.

“You have comparable countries [Australia and NZ] with a 10 per cent difference in the number of retirees working,” Henschke said.

Given there are four million retirees in Australia, if 10 per cent more were to work then that would boost the workforce by 400,000 people.

A boost to the workforce of that number would add $60 billion to national income and help bridge the emerging worker shortage, National Seniors says.

The move would particularly help industries that are most reliant on women, help older women avoid poverty, and increase the availability of services for the rest of the community.

“So let them work, you could justify it on gender equality.”

The Financy Women’s Index rose 1.6 per cent to 72.3 despite the gender pay gap widening during the December quarter.