The Premier today committed a re-elected Liberal government to a $25 million, five-year spend on financial support for outdoor tourism ventures, who will have to co-contribute funding to grow their businesses.

The pitch continued Steven Marshall’s theme that a sound economy is the base underpinning spending on other key areas.

“We only saw last night that SA Ambulance was at OPSTAT red, which means South Australians weren’t getting the ambulances they need when they need them,” Malinauskas said.

“We think that patients should be treated closer to home, so Labor will build a brand-new cancer centre here at Modbury Hospital that currently does not exist.

Ex-Labor maverick turned independent candidate for Newland Frances Bedford, who has strongly campaigned for improvements to Modbury Hospital, welcomed her former party’s announcement but said she was pushing for the return of an obstetrics, birthing and gynaecology unit.

The former member for Florey quit Labor to become an independent in 2017 after losing her preselection to right-winger Jack Snelling – who subsequently announced his own retirement.

In October, Bedford announced a tilt at Newland, after a boundary change shifted many of her constituents into the seat.

“This announcement sounds good, but the devils in the detail,” she told InDaily.

“I’ll need to have a look at it and unpack what it is, but obviously any money is good – the sooner the better.

“We now need to wait to see what the Liberal Party is offering as well.”

Malinauskas said he worked with Bedford closely while she was still part of the Labor Party and still spoke to her “from time to time”.

“This is Labor’s plan – Frances is an independent – and if I’m honest the most powerful advocates, to me, in the development of this (Modbury Hospital) policy have been Rhiannon Pearce and Olivia Savvas, who are our local Labor candidates.”

As for Marshall, Bedford said: “he doesn’t speak to me at all unless he has to”.

But the Premier was happy to talk down his Labor counterpart today, after committing his Government to a $25 million slice of the $80 million the Opposition has pledged for a rebuild of the Adelaide Aquatic Centre in North Adelaide.

“This is a project which came to us from the Adelaide City Council… we think this is a great investment but I’ve got to say, using one of my mother’s old expressions, Peter Malinauskas was done like a dinner,” he said.

“He got completely outmanoeuvred by the Adelaide City Council… and I think it just demonstrates a lack of acumen when it comes to deals on behalf of SA taxpayers.”

Marshall was coy about whether he hit up visiting federal Treasurer Josh Frydenberg for the final funding commitment to the project yesterday, saying: “This is an Adelaide City Council project… I’m not going to go into all the conversations I’ve had with Josh Frydenberg but I’ll leave their funding announcements up to them.”

But, in an emerging campaign theme, he turned the attack onto the “risky” Labor leader, saying “it really does demonstrate how reckless he’ll be with taxpayer dollars” – while chiding Malinauskas’s presidential-style campaign.

“We’ve proven that we can, by having a strong economy, also improve services – no jogs around the park, no dips in the pool, no novelty cheques, no blank cheques to the Adelaide City Council,” Marshall said.

He said the Opposition Leader “wants to spend money writing out novelty cheques everywhere he goes”.

“He’s basically got the L-plates on,” he said, in an apparent nod to the former Howard-era attacks that helped cruel ex-federal Labor leader Mark Latham’s ill-fated 2004 campaign.

“In fact, he’s got the floaties on – he loves the pool,” Marshall continued, an acknowledgment to Malinauskas’s much-hyped dive in the deep end last week. 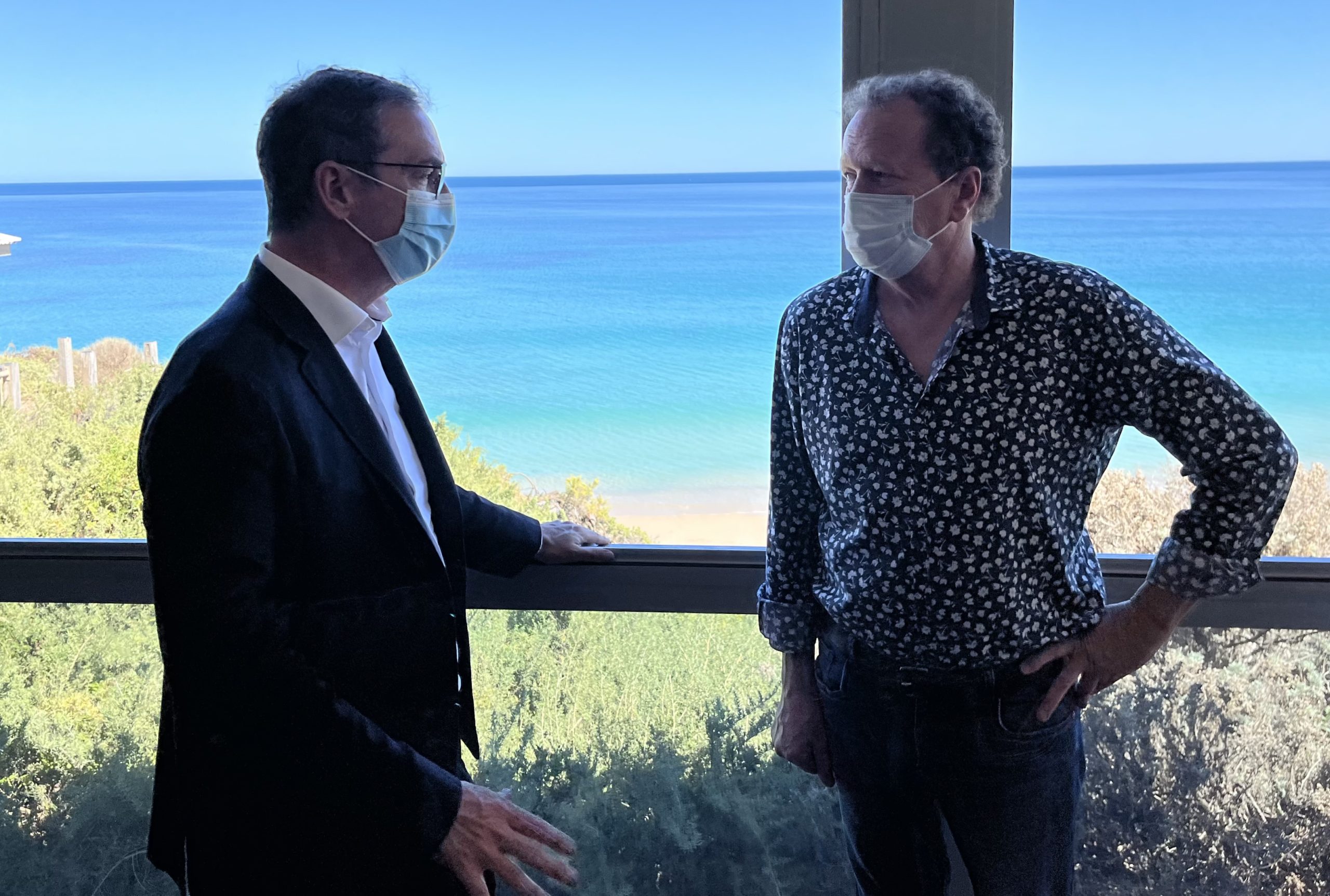 Asked by InDaily whether he would follow suit, with the sea vista beckoning outside his chosen campaign locale – the Star of Greece restaurant in the Labor-held marginal of Mawson – Marshall laughed: “I’ll go in the pool when you go in the pool.”

Then, after realising the folly of making campaign promises one doesn’t intend to keep, he added: “In fact, I take that back.”