Research conducted by online market research company Dynata on behalf of progressive think-tank The Australia Institute puts Labor two points ahead of the Liberals as the state election campaign kicks off, InDaily can reveal – with the ALP on 51 per cent of the projected two-party statewide vote, to the Government’s 49 per cent.

The result flips the numbers from the last statewide poll taken by the same company, which in September had the Liberals retaining a 51 per cent two-party vote to Labor’s 49 per cent.

A table of SA voting intentions by age and gender from the survey conducted this month.

The shift in voting intentions could be linked to the Government’s decision to re-open SA’s borders in November and keep them open, despite initial SA Health advice, after the emergence of the Omicron variant.

The poll found a narrow majority of respondents (51 per cent) believed the Government made the wrong decision when it opened the state borders, while only 42 per cent believed it was the right decision and seven per cent were undecided. 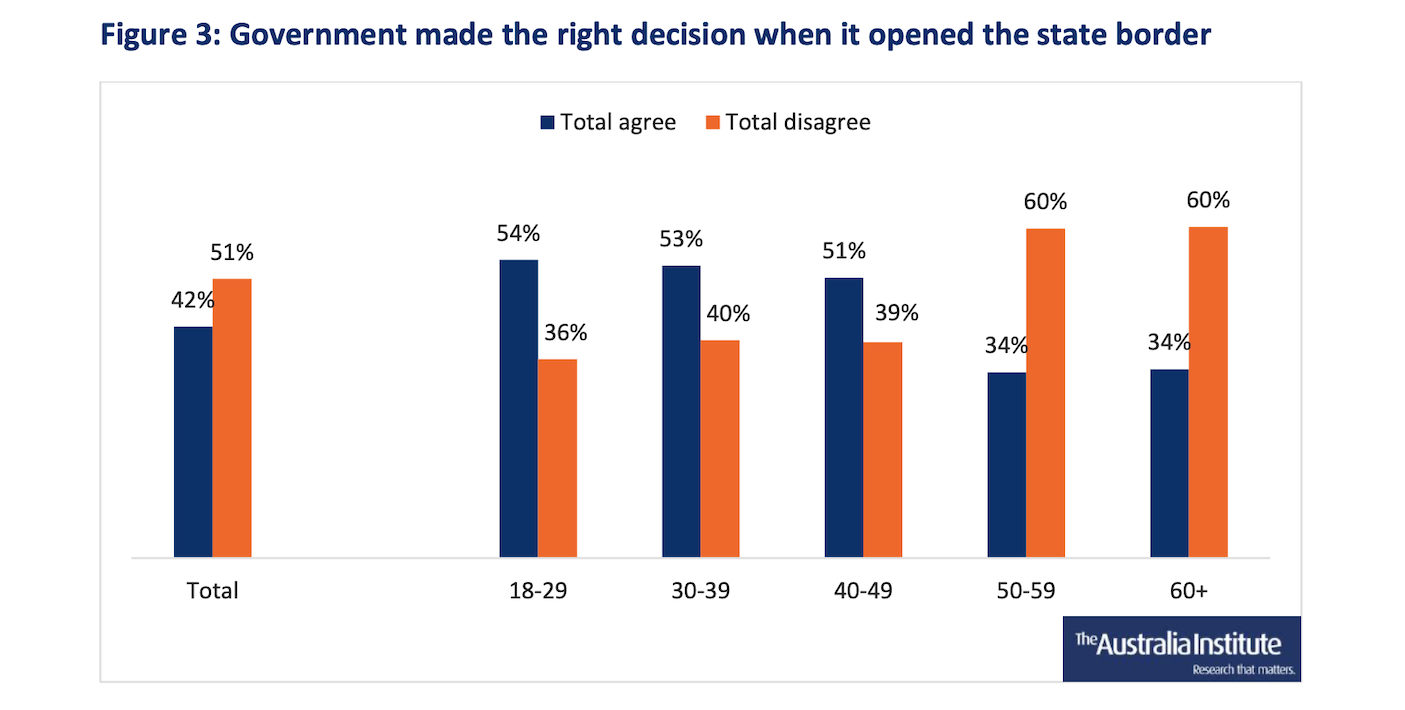 A table from the survey. Source: The Australia Institute

However, almost 77 per cent of those polled said more should have been done to prepare before the borders were re-opened. 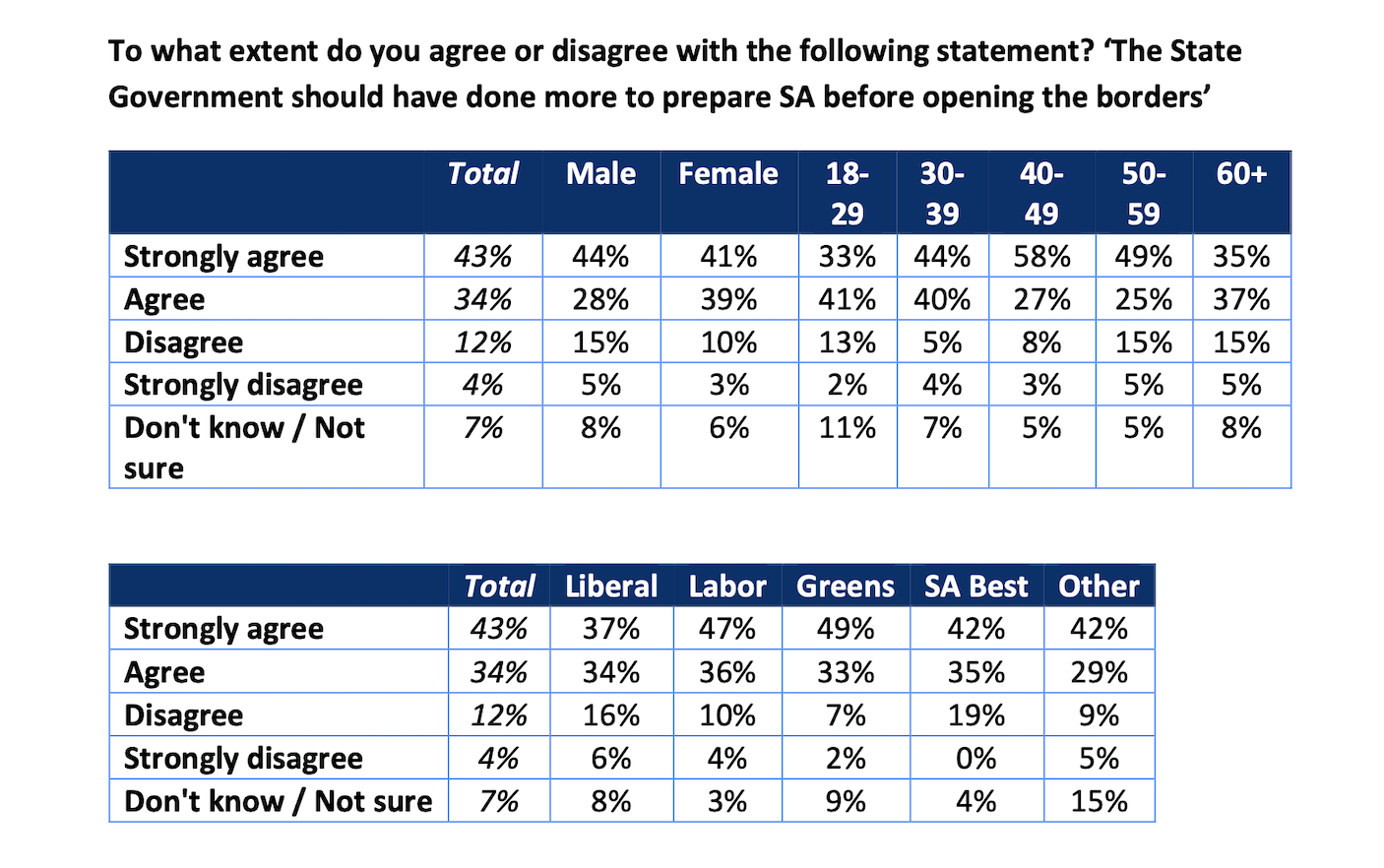 Two tables detailing responses to a question about SA’s preparedness for the border reopening, grouped by age, gender and political affiliation.

The poll presents an intriguing scenario in the first week of the month-long campaign, with both major parties a genuine chance to form government – and the prospect of neither winning enough seats to govern in their own right also looming as a genuine one.

On a primary vote, 35 per cent of respondents said they would vote Liberal in the lower house to Labor’s 37, with the Greens garnering 7 per cent, SA Best 4 and a significant 17 per cent favouring other candidates.

In the Upper House, 9 per cent of respondents favoured the Greens, while One Nation – fighting its first state campaign since 2006 – picked up 5 per cent, as did the Nick Xenophon-founded SA Best.

These could include a glut of minor parties and independents, with Family First seeking to re-establish its electoral credentials under former Labor MPs Tom Kenyon and Jack Snelling, and former Director of Public Prosecutions Stephen Pallaras seeking election under his Real Change SA banner.

A table detailing voting intention for the Upper House.

The Australia Institute’s SA director Noah Schultz-Byard said the results of the first statewide poll since the campaign began showed “it will be a hard-fought campaign that may well come down to the wire”.

“While there are mixed opinions in the community regarding the decision to open the state’s border in November, there is a strong sentiment that the Government should have done more to prepare the state for the subsequent influx of COVID-19,” he said.

“The perception that South Australia was not adequately prepared when the borders were opened is held across the political spectrum, with a majority of voters for all parties agreeing more should have been done.”

The Institute’s previous poll in September identified health – and the COVID pandemic – as key battlegrounds for the forthcoming election, but Schultz-Byard emphasised that “polling doesn’t predict political outcomes and is simply a snapshot of sentiment at one time”.

Nonetheless, he said, “if these voting intention results are reflected as a uniform swing at the election, Labor would win the four seats required to form a majority in the lower house”.

“Of course, the election is still a month away and anything can happen on the day,” he added. 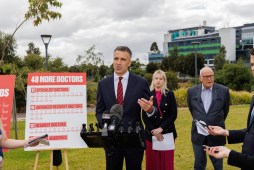 The research was based on a “representative sample” by age and gender of 602 South Australians surveyed online between the February 1 and 14.

Results were weighted by age and gender based on Australian Bureau of Statistics data, using the raking method, which resulted in an effective sample size of 535.

The Australia Institute says there is a four per cent margin of error, with questions about voting intent asked before policy questions.

Respondents who did not know or had not decided voting intention were asked to identify a party or candidate to which they had a leaning.

The statewide two-party-preferred result was calculated based on preference flows at the 2018 election.