Opposition leader Peter Malinauskas was at the new Women’s and Children’s Hospital site in the north-western park lands this morning to announce Labor would expand the Marshall Government’s plans by adding more beds and recruiting additional doctors.

Construction on the new $1.95 billion Women’s and Children’s Hospital is due to start later this year.

The government says it would include 59 more treatment spaces than the current hospital in North Adelaide, allowing for 3400 more inpatient admissions and 18,000 emergency department attendees.

But the Opposition says the government’s plans are “inadequate”, claiming there would be one less overnight paediatric bed at the new hospital compared to the existing hospital.

Under its plan, which it says was developed following consultation with clinicians and the Australian Medical Association, the Opposition would spend $100 million on 50 additional beds in wards such as cancer and mental health.

That funding would come from the $331 million pool it announced over the weekend.

Labor also wants to spend $31.6 million on recruiting 48 more doctors, including 17 senior specialists, at the current Women’s and Children’s Hospital, as well as $6.2 million to recruit specialist nurses to work on the hospital’s cancer and mental health wards.

“What South Australians don’t want to see is this election (being) about the blame game.

“They’re sick of it, they don’t want to hear about apportioning blame on health, they just want to know who’s got a credible solution… to address the ramping crisis and set up our health needs not just for the next four years but for the next generation.

“That’s why we’ve got to get the Women’s and Children’s Hospital right the first-time round.”

Planning is already well-underway for the new hospital, with the government on Friday announcing it had appointed Lendlease as the builder.

Asked if changing the plans would delay the hospital’s opening – currently scheduled for 2027 – Malinauskas said: “we don’t believe so”.

“Every budget there seems to be another delay being announced.

“The one virtue out of that is we’ve got a chance to do it properly the first time, but that can only happen with the intervention of the people of South Australia.”

Labor says its capital health spending would be funded by scrapping the Marshall Government’s plans to build a $662 million Riverbank Arena next to the Torrens near the Morphett St bridge.

Asked how he would fund the ongoing operation of the Women’s and Children’s Hospital, Malinauskas said: “that’s reflected in the recurrent costs”.

“We’ve already been announcing those as we go along,” he said.

“Political parties, political leaders have to make commitments about what their plans are for the future at every election campaign and that will be fully accounted for in our election costings to be released during the course of the campaign.”

Premier Steven Marshall, however, described Labor’s new WCH commitment as “like Groundhog Day” and said the Opposition “do not have a comprehensive plan, they have slogans”.

“Labor promised a new Women’s and Children’s Hospital in the lead up to the 2014 election, they promptly got elected … and completely shelved the plans – in 2017 they walked away from them completely,” he said.

“We’ve already set the contract in place with Lendlease, we had extensive consultation with the people that are working on the frontline in those health facilities, we’re going to cater for an additional 20,000 plus patients in that facility per year. 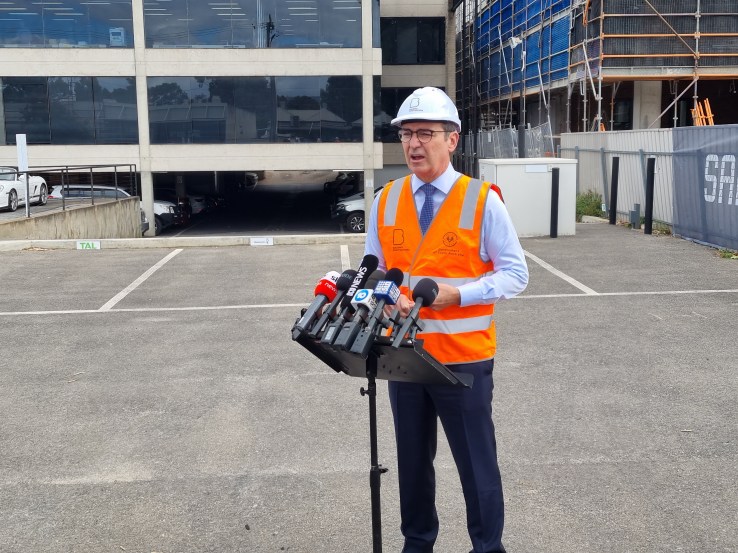 “But it’s not just limited to the Women’s and Children’s Hospital, you need paediatric services – services for women and children – not just in the central hospital but right across the health system in South Australia.

“That’s what we’re delivering, not a promise before an election, a delivery … Peter Malinauskas cannot be trusted with his health promises on the eve of an election.”

It comes after Labor over the weekend kicked off its state election campaign by pledging to open 300 more hospital beds and recruit 100 more doctors over the next four years as part of a $331 million health funding package.

Marshall took aim at Labor’s broader health commitment, saying the government had already put on more than 100 doctors each year since the last election.

Asked specifically if there was an additional number of doctors his government would put on if re-elected, the Premier said: “It’s not up to politicians to do that, our responsibility is to set the budget in response to what is needed in South Australia.”

Marshall’s big talking point on day three of the election campaign was a pledge to remove payroll tax on all trainees and apprentices for two years.

The exemption would be for eligible trainees and apprentices who commence a new training contract from July 1, 2022 to June 30, 2024.

The Liberals estimate the policy – which expands on an existing payroll tax exemption scheme introduced in 2020 and extended in 2021 – will save employers $18.2 million.

“We know it’s expensive for a company to take on an apprentice or a trainee, we know that it’s a real commitment for them to participate in that training,” Marshall said.

“We want to make it even more attractive for businesses in South Australia to take on apprentices and trainees.”

Asked whether the commitment would be extended beyond two years, Marshall said: “Who knows what will happen down the track, there may be other areas that we need to stimulate.”