Marshall this morning visited Governor Frances Adamson, who he appointed last year, who has now issued writs to the electoral commission for the March 19 poll.

The Premier’s car arrived and left Government House by a back gate, avoiding a group of protesting ambulance workers at the main entrance. 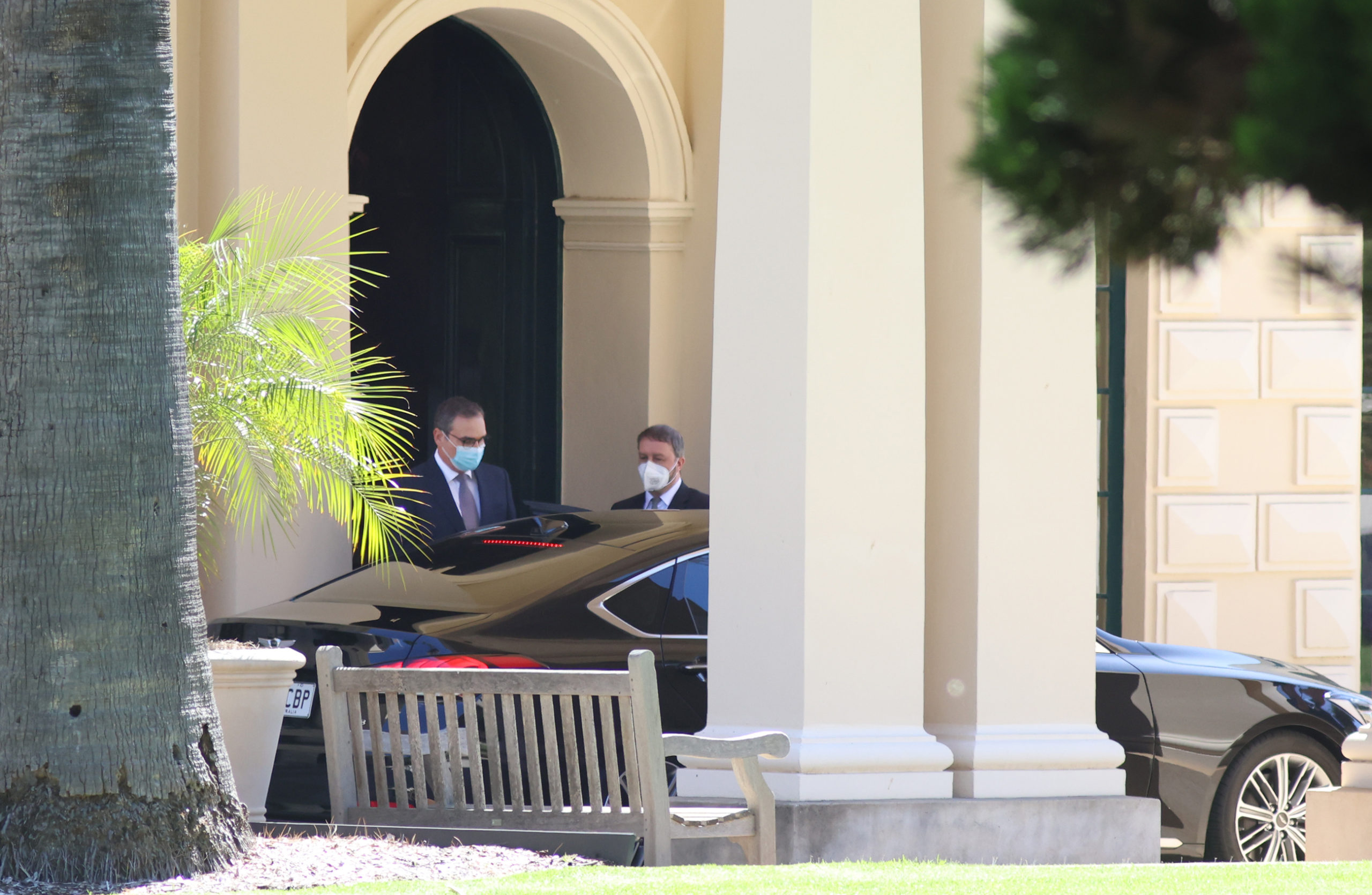 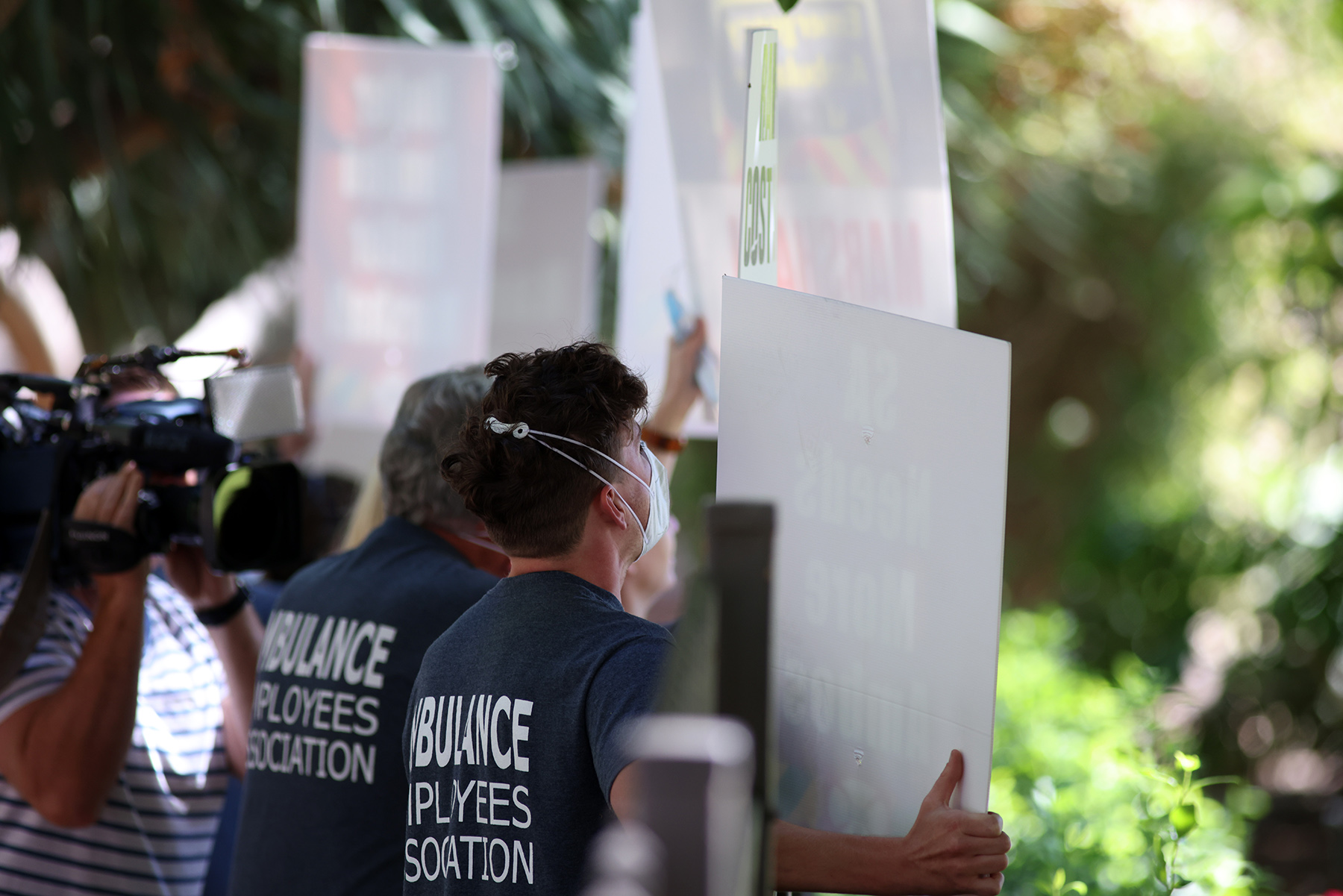 The Premier earlier faced media at a defence announcement, at which he unusually took a back seat to federal finance minister and SA senator Simon Birmingham, announcing a deal to construct a $160 million state-funded maintenance facility adjacent the Edinburgh RAAF Base for Australia’s P-8A Poseidon fleet.

The funding has already been approved by cabinet and is not an election commitment.

But asked about the election, Marshall suggested it would be a referendum on the state’s performance through the COVID pandemic.

“I think it’s very clear SA has done well in the face of a global pandemic – we’ve kept SA safe and our economy strong,” he said.

He cited a “record economic performance, record exports [and] more people employed than prior to COVID”.

“We’ve finally got people coming back to our state, we’ve turned off that exodus of young people and capital,” Marshall said.

“The risk to this is a change in government.”

He said his first-term Liberal Government had reduced costs for energy and water “and grown our economy”.

“That’s what’s at stake if the former union boss [Labor leader Peter Malinausaks] gets his hands on the Treasury bench,” he said.

However, he again declined to say who would be pulling the Treasury levers if the Liberals were re-elected, with incumbent money-man Rob Lucas retiring on polling day.

“We’re spoilt for choice in the Liberal Party,” he said, declining to rule out his former deputy Vickie Chapman making a once-mooted move to Treasury.

“The way we make decisions in our cabinet government is not up to the Treasurer, it all goes through the cabinet… we’ve got a large budget cabinet committee, there’s some very strong performers there.

“I’m just making it clear I’m not going to be drawn on who the next Treasurer’s going to be – we’re going to see what happens at this election, who is elected, and we’ll put our best team forward onto the playing field after the election.”

Asked whether the Government’s contentious border re-opening would factor in the poll, Marshall said there was “no doubt that COVID will play a big part in this election”.

“It’s uppermost on people’s minds… we’ve worked together to keep people safe, but at the same time grown our economy – now is just not the time to be taking risks,” he said.

“Who do you trust to keep building a stronger SA – a former union boss or a government that’s delivered, kept SA safe and our economy strong.”

Malinauskas this morning declared that the election wouldn’t be a COVID “blame game”, saying he was focussed on the future and citing skills training and the health system as key battlegrounds.

“This next election is going to be all about the future of our state post the pandemic,” he said.

“There is an extraordinary opportunity for us, and I believe there is a sense of optimism to see us not just go back to where we were before, but have a better future for the next generation.”

The Labor leader said the poll would be “all about who has a plan post the pandemic”, pointing to this week’s unemployment figures – in which SA went from a record low rate to once again record the worst rate in the nation.

“We have the worst underemployment… people are crying out to employ people with skills,” he said, arguing that closing the skills gap would be a key plank of Labor’s policy pitch.

“I think South Australians want to see a serious, credible plan to fix the ramping crisis – I’m going to present them with that,” he said.

That would be funded, he said, from the $662 million the Government has committed to a new city arena, money Labor has pledged to instead commit to health.

“I’m the only leader that’s got a united team, a fresh team and a new policy vision for the future of the state,” Malinauskas said.

He argued that the state’s education system required a generational overhaul, saying “you can’t just keep kicking the can down the road”.

“I don’t just blame the current government, you can blame all former governments,” he said, despite the fact his deputy Susan Close was the Education Minister in the last Labor government.

He said a commitment to invest in ‘early years’ learning was not about “getting a return next year, or in five years or 10 years”.

“This is about setting us up for the next generation,” he said.

“I don’t know what Steven Marshall wants the election to be about – I can honestly say I actually don’t know what his plan is for the next four years, apart from the basketball stadium.”

“My message to voters is that the electoral roll closes in less than a week – if you have moved house, become a citizen, or turned 18 since the last election, use this weekend to check your details or register to vote,” he said.

“It is our hope that every eligible South Australian has enrolled to ensure they have the opportunity to vote on the issues that are important to them in this election.”