The data, released yesterday, shows there were 675 new homes approved within the Playford Council area in the five months from July 1 to November 30.

North-western council Port Adelaide Enfield was second with 389 while Salisbury, Tea Tree Gully and Gawler also featured in the top 10.

The state’s largest council, Onkaparinga in the south, was third on the list, while Charles Sturt in the west was fourth. The fast-growing Hills township of Mt Barker also featured strongly with 299 new building approvals handing it fifth place.

Although the housing boom has eased from its highs of early last year, fuelled by the HomeBuilder grant scheme introduced by the Federal Government during the early days of the coronavirus pandemic, momentum is still strong.

In November there were 986 houses approved in South Australia, up from 784 in October.

It was also up from 902 in November 2020, when the HomeBuilder grants were still available and is the highest November figure since 2007. 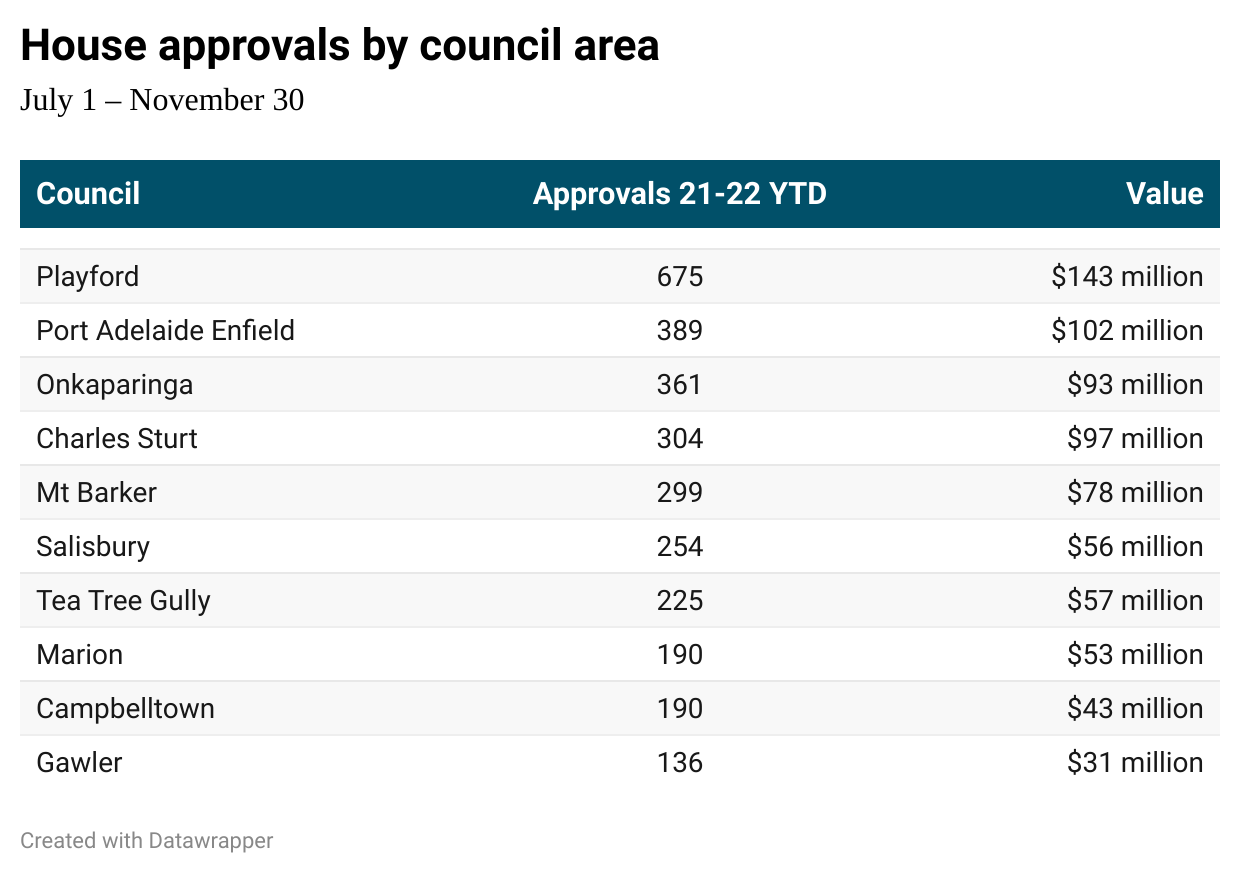 Master Builders SA CEO Will Frogley said new home sales had continued to be “pretty decent” since the end of HomeBuilder in April and were still up corresponding periods before the pandemic.

“There definitely hasn’t been that massive cliff that some predicted once the HomeBuilder grant ended,” he said.

“While there was a big push towards infill and apartment living before, since COVID people seem to be valuing space a lot more and the north, south and Mt Barker have definitely proven hugely popular and it’s a strong fundamental change we’ve seen.”

Across the first five months of the financial year to the end of November in SA there were 4726 new housing applications with a value of $1.35 billion.

The major hot spots in the northern suburbs were Munno Para West–Angle Vale (241), Davoren Park (224) and Virginia-Waterloo Corner (137).  The statistical area of Mitchell Park (73), which includes previously vacant land around the Tonsley Innovation Precinct, and McLaren Vale (82) were popular spots for new houses in the south.

Almost half of the new home building approvals outside of Greater Adelaide have come in areas within a 90-minute drive of the city such as the Fleurieu Peninsula and Barossa Valley.

The Fleurieu had 302 new home approvals in the five months to the end of November led by the towns of Victor Harbor (81), Yankalilla (56), and Goolwa-Port Elliot (104).

The Barossa had 101 new home approvals while Murray Bridge and Mannum added 82.

The copper triangle on Yorke Peninsula of Wallaroo (41), Moonta (33) and Kadina (13) had 87 new home approvals while the state’s second-largest city, Mount Gambier had 89. 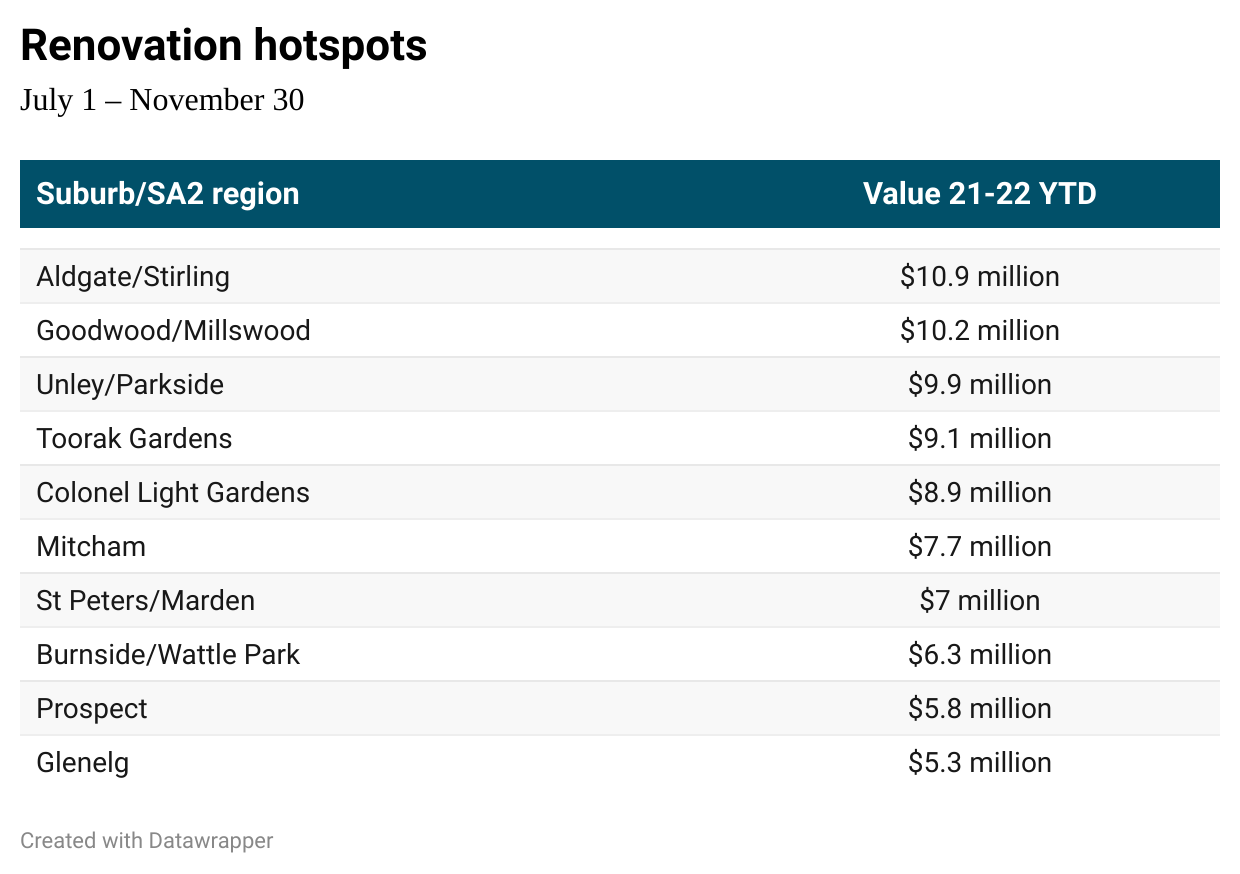 “The Fleurieu Peninsula has been extremely busy through this time – it’s a pretty nice lifestyle they’ve got down there and it’s within striking distance if you need to get to Adelaide quickly as well,” Frogley said.

“Land is definitely still really tight though. Whenever land comes up in some of these areas it does tend to get snapped up really quickly and it’s definitely a big issue in terms of lack of supply.”

Nationally, the number of dwellings approved in Australia rose 3.6 per cent in November, in seasonally adjusted terms following a 13.6 per cent decline in October.

When it comes to renovations, South Australia received $251 million worth of building applications for house alterations and additions from July to November, $200 million of which were in Greater Adelaide.

These were chiefly in the eastern suburbs and Adelaide Hills with major hot spots in Aldgate and Stirling, Crafers, Goodwood, Toorak Gardens, Unley and Colonel Light Gardens.

“The whole industry has been busy. It’s not just the first home buyer market but also luxury builds and major renovations,” Frogley said.

“In that well-heeled market, it’s people who are pretty cashed up and haven’t been able to go overseas on a family holiday so they’ve prioritised doing up their home.”