That new reporting regime, which included deaths and injuries, was mooted to be phased in from May, with a quarterly release of monthly data to be made available from late last year.

The industry’s annual report, published last month, included key metrics on euthanasia linked to illness, injury and “temperament”, as well as documenting 21 deaths on the track, up by three on the previous year.

There were also 11 more “deaths by natural causes” than the previous year, 44 compared to 33. 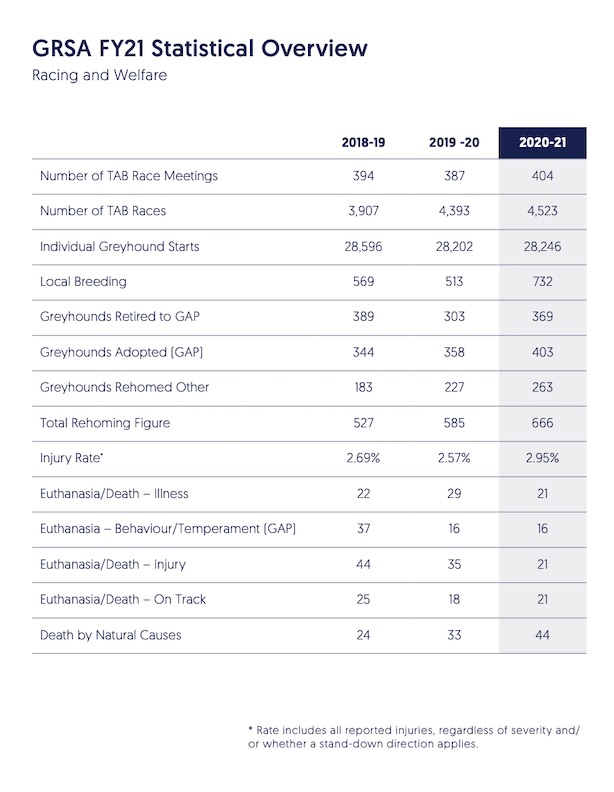 An excerpt from the annual report.

Greens MLC Tammy Franks, who chaired a committee looking at broader animal welfare reform legislation, has pushed for reporting benchmarks to be legislated, requiring mandatory reporting of the number of registered and unregistered greyhounds euthanised each year – and the manner in which they died.

The move is backed by national body the Coalition for the Protection of Greyhounds.

CPG director Annie Hendley told InDaily the 79 greyhounds euthanised in the last financial year, as well as 44 deaths from natural causes, were concerning.

“Community-run rescues don’t euthanise unless a dog is terminally ill or suffering badly, so once again the dog racing industry has shown it’s too lazy to socialise its dogs so they have a future after they stop racing,” she said.

“What makes this even worse is that GRSA also reported returns to the SA racing industry that were the highest on record.”

The report stated that returns to the industry in the 2020-21 financial year “were the highest on record, due largely to circumstances associated with COVID restrictions [and] it’s anticipated that wagering levels will continue to calibrate over time in line with a return to a lifestyle and behaviours more consistent with our experience prior to the pandemic”.

Hendley said the coalition’s own data showed there were nine deaths at Murray Bridge, seven at Gawler and two each at both Angle Park and Mt Gambier.

“Gawler is now the fourth-worst track in Australia this year, while Murray Bridge is the second worst,” she said.

“Any organisation dealing with animals must be 100 per cent transparent with the public.”

But GRSA says it’s doing just that, with CEO Matt Corby insisting “the metrics in the Annual Report amount to a thorough summary of our operations and all retirements are accounted for within that table”.

The report detailed that 28,246 runners competed with an injury rate of 2.95 per cent, while 1606 samples were taken with 0.49 per cent testing positive for prohibited substances.

All registered premises were inspected on at least one occasion during the year, the report stated.

“The latest annual report table amalgamated some of the data to aid its readability and reported across multiple previous years,” he said, adding that GRSA would soon publish on its website “a raw form of the July-September data, and that process will continue quarterly”.

“That data will follow the format proposed to the Joint Committee into the Animal Welfare Act,” he said.

“We will be happy to advise stakeholders when it is published.”

“We can read that inspections were done but still don’t know, for example, how many breeders and trainers failed those inspections, how many dogs were imported from interstate, and how many retired greyhounds there are,” she said.

“What’s even more concerning is that even with the limited data GRSA do report, the numbers are trending in the wrong direction.

“Over the past year we have seen an increase in injury rates and in deaths – this cannot be acceptable and is contrary to their previous pledge.

“It’s time that the Parliament stepped in and mandated reporting on key areas of concern.”

But Franks appears to be losing key support.

In September, Liberal committee member Nicola Centofanti, a registered veterinarian, told parliament that despite “the volunteer efforts of Greyhound Racing SA in this regard, and improved practice in recent years, [the committee] found that the transparency and consistency of data provision would be much more improved by the mandating of that data in its annual reporting to the minister”.

However, she told InDaily today: “I have seen GRSA’s 2020-21 annual report and note they have reported on a number of racing and welfare statistics including injury rate, euthanasias and rehoming, which I commend them on.”

“Recently they have been very transparent in their reporting and, provided they continue to report honestly and openly, mandating may not be necessary,” she said.

Corby denied the published figures were “cherry-picked”, arguing “all of our key statistics are included in the annual report”.

“The Board and Management of GRSA is genuinely committed to ensuring that greyhound racing in South Australia is undertaken with regard for the highest standards of safety and welfare,” he said.

“Animal welfare considerations are central to GRSA’s management of the sport and a framework of strategies have been put in place to mitigate the risk of racing injury to the greatest extent possible.

“Both the Angle Park and Murray Bridge tracks have been redeveloped this year, based on track safety research commissioned by the industry and undertaken by the University of Technology Sydney, featuring a layout that sets the standard for modern best-practice design by minimising the risk of injury to greyhounds and including changes to camber.”

He said that “no code of racing in any Australian state returns a greater share of its revenue to rehoming and welfare than GRSA, with that figure exceeding $1.5 million in the past year”

But Hendley said GRSA was “still behind its 2016 re-homing level” despite the spend, “while community-run rescues rehome far more greyhounds across Australia on the smell of an oily rag”.

“Clearly, the new SA laws proposed by the Greens to address SAGR’s lack of transparency are vital,” she said.

Corby points out that “no recommendations for reporting have yet been resolved as an outcome of select committee hearings but GRSA remains open to the form that any future reporting might take”.

“We are committed to being open and accountable to all industry stakeholders and most importantly, to the public,” he said.