Seventy-two-year-old Helen, who asked InDaily not to publish her surname, was told yesterday the major operation she had been preparing for over the past six months to correct her severely curved spine would not go ahead today as scheduled.

“I couldn’t believe it – I keep getting teary,” she said.

“I rang up to check on the time and was told that they just had to cancel.”

Helen’s surgery is a victim of a State Government policy to cancel “non-urgent” elective operations across South Australian hospitals to free up healthcare resources for the state’s COVID outbreak.

But her surgeon said hospital wards had instead been left “empty”.

Dr Mike Selby last night went public with his concerns, Tweeting an X-ray image of Helen’s spine which is compromising her lungs.

“Elective” surgery purely means it is not an emergency.

This tough patient, in her 70s, needs major #scoliosis #surgery for her spine that has curved the wrong way from the front, and the side.

She is gradually squashing her lungs and the next to go will be her spinal cord…. pic.twitter.com/yLDFYOGAbA

“‘Elective’ surgery purely means it is not an emergency,” Selby wrote.

“This tough patient, in her 70s, needs major scoliosis surgery for her spine that has curved the wrong way from the front, and the side.

Helen relies on a walking frame and lives with severe pain requiring her to take a “cocktail” of daily medication.

“My days are pretty useless – I just keep going as best I can,” she told InDaily.

“I can’t get very active. I have to use the walking frame all the time. I spend a lot of time sitting at home or lying in bed.

“My surgeon said to me: ‘You’ve got two choices with this – you can do nothing and you’ll live a short life or you can have the operation’. 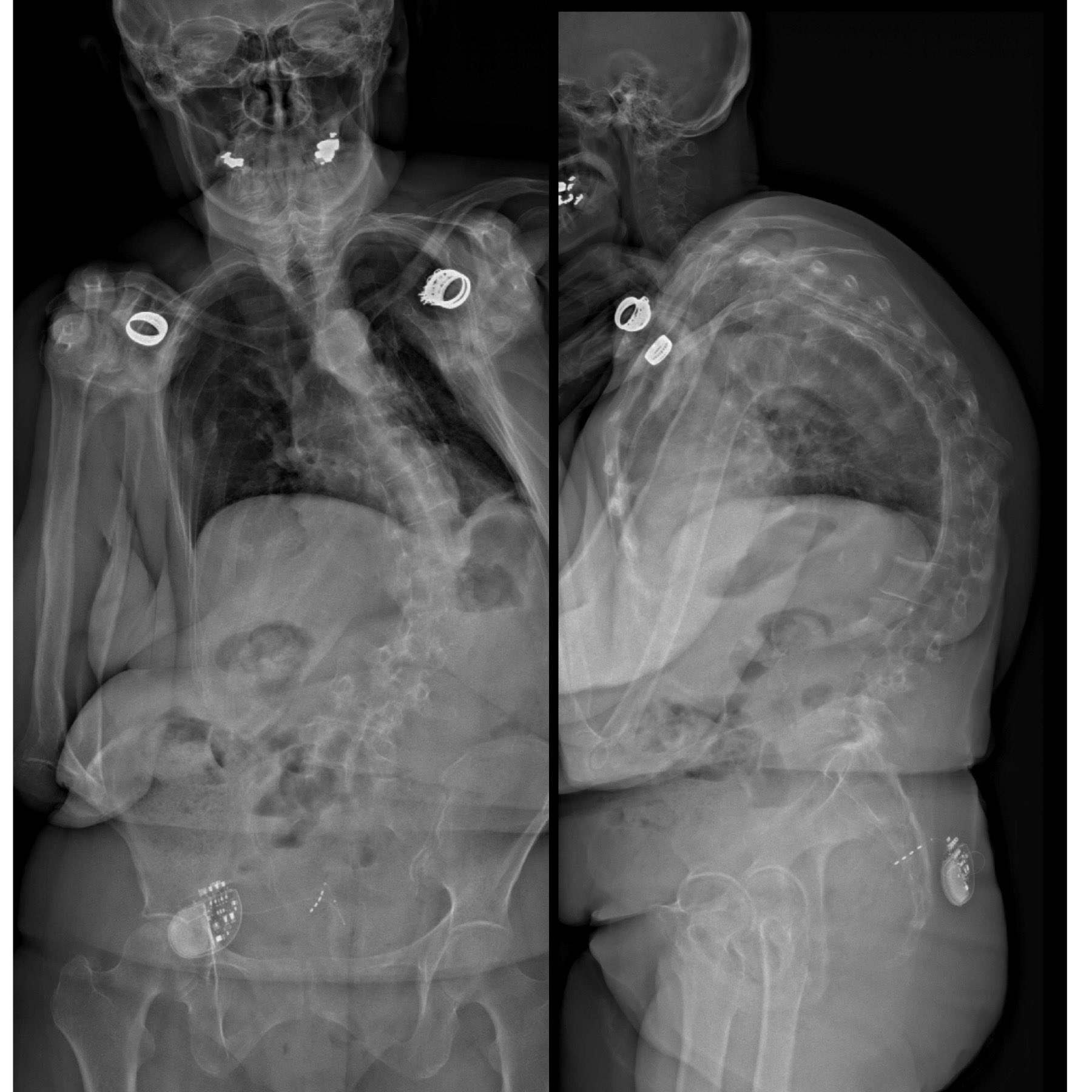 “I’ve got young grandchildren aged 10 down to four and I’m not getting the best days of my life with them,” she said.

“They are gorgeous. I want to see them grow up.”

Helen said her spine had significantly deteriorated in a “short space of time”.

“My spine has gone C-shaped and to the left and it’s compromising my lungs,” she said.

“My left lung doesn’t look like a lung anymore: it’s just an odd shape, like a long rectangle. And the right lung is ballooning out and trying to overcompensate and that doesn’t work properly.

“My respiratory specialist said if I was to catch COVID, well that’s ‘goodbye’.

“I am now triple vaccinated, I haven’t taken any chances but that’s still not necessarily going to save me if I was to catch it. And I’m having difficulty breathing.

“That’s the secondary effect. Not to mention the pain. It’s been a very rapid progression of my spine.

“To say that that’s not serious enough to have my surgery I’m astounded.”

Helen said she had spent six months preparing for the operation – “tests checking everything because it’s very major surgery”.

“It starts off with a three-to-four hour surgery on the lower back and as I recover from that over a few days then I go in and do a surgery that will take up to nine hours on my actual spine,” she said.

“It was going to put three rods in and metal going everywhere – but the end result would be definitely worth it, but it was still very daunting.

“I’d finally really been at peace about having it and knowing it would all be over, knowing that it would solve all my problems.”

Selby, who operates at The Memorial Hospital and Calvary North Adelaide, told InDaily Helen was one of many patients across the system “left anxious with no end-date in sight”.

He said he was doing about 30 per cent of surgeries he normally would at this time – those still considered “urgent” enough by health authorities – but 70 per cent of his patients now had to wait.

“The patients take a really long time trying to build themselves up mentally to have those big operations and suddenly they are let down,” he said.

But he said private hospital wards had been left “empty” since the cancellation of surgeries.

“I’m walking around the hospital at the moment – it’s completely empty, 70 per cent of theatres are unused and we could be doing things with this space,” he said.

“To just shut everything down without actually then utilising those resources is an absolute waste.”

Selby said he presumed the wards would eventually be used to transfer public patients into as COVID hospitalisations rose, but he did not understand why he wasn’t seeing that now.

“A very practical solution to me would be to start moving simple trauma cases… even more complex stuff… out from the public sector to private,” he said.

“I presume it’s the plan but I don’t know why it’s not happening now.

“Why wouldn’t you start by rostering and relieving staff at the Royal Adelaide and allowing more capacity there?

“I think we’ll continue to see those hospital numbers (of COVID patients) creeping up. I just don’t know why you wouldn’t start planning for that now a little better.”

Selby said he was not opposed to the policy of postponing elective surgery to help the state cope with a surge in COVID cases, “as long it leads to something”.

“What we’ve had is a kind of snap decision and it’s led to a lot of resources sitting idle,” he said.

In a statement, SA Health said “in order to keep South Australians safe as we experience more COVID-19 in our community, changes were made effective January 4 to what surgeries are considered appropriate during the pandemic”.

“Elective surgeries are now limited to Category 1 and Urgent Category 2 to increase capacity across our public and private hospitals for both patients and staff,” the statement said.

“We are constantly reviewing our acute care strategy to meet the needs of South Australians.”

Authorities yesterday announced 4024 new cases in SA and two deaths – a man in his 90s and a woman in her 80s – with 188 people in hospital including 21 in intensive care and four on a ventilator.

This afternoon, the Premier announced one more death – a woman in her 50s – and an increase in hospitalisations to 211 people, with 22 in intensive care including four still on a ventilator.

Daily case numbers however dropped to 2921.

Pressure is being felt across the health system, with paramedics continuing to report ambulance ramping.

The Ambulance Employees Association last night Tweeted that a young child with “significant burns” was forced to wait nearly an hour for an ambulance.

“Tonight a southern suburbs family called 000 for their 3yo who sustained significant burns,” it wrote.

“There were no ambulances to send. Our sincerest apologies to this family and their child who waited an agonising 51minutes for an ambulance to arrive.

“Ramping and under resourcing is depriving South Australians of life-saving treatment when they need it most.”

Tonight a southern suburbs family called 000 for their 3yo who sustained significant burns. There were no ambulances to send. Our sincerest apologies to this family & their child who waited an agonising 51mins for an ambulance to arrive. #SANeedsMoreAmbos #StopRamping #saparli

The SA Ambulance Service this morning confirmed that a Triple Zero call had been received yesterday for a child “reporting burns from a hot drink”.

It said the patient was “appropriately triaged” as a Priority 2 case and confirmed that crews arrived in 51 minutes.

It also said the Ambulance Service had experienced an “exceptionally busy day with demand for service around 5pm far above predictions”.

In a statement, a spokesperson said “all paediatric cases are treated as significant and an emergency ambulance was dispatched while clinical advice was provided by phone”.

“SAAS recognises the increasing demand for ambulance services at this time and actively triages all cases, responding to the most serious first,” the spokesperson said.

“SAAS clinicians make difficult and patient-centred decisions based on patient needs each day and we’re proud of them.

“We continue to bolster our workforce and to implement our Pandemic Resilience Plan to ensure we can respond to the community.

“This serves as a reminder, also, to ensure that where appropriate South Australians continue to seek alternative health care options for less serious conditions, so that we can be there for those who need help the most.”