Premier Steven Marshall told ABC Radio Adelaide this morning that education officials would meet today to discuss whether to delay the start of the school year amid a flood of COVID-19 cases across the state.

A decision about whether schools should reopen as planned on January 31 and in what capacity is likely to be made on Friday following a national cabinet meeting, with Marshall, who is currently isolating at home as a close contact of a positive case, saying it was a “big issue” on his agenda.

It comes as the State Government continues to encourage public servants and private sector employees to work from home.

But SA Primary Principal’s Association President Angela Falkenberg said parents shouldn’t be given the choice to keep their children at home for remote schooling if classrooms reopen on January 31.

“Schools cannot do a hybrid model – they can’t do both,” she told InDaily.

“There’s some parents saying, ‘well I’m going to keep my child home’ and if school is open but parents are choosing to keep them home then the responsibility for the learning is on the parent.

“Teachers just can’t do both – that is a workload issue.”

The vaccine rollout for children aged five to 11 started today, but those within that age bracket will not be fully-vaccinated by the time schools returns, given the Australian Technical Advisory Group on Immunisation has recommended an eight-week interval between vaccine doses.

There are an estimated 148,253 children aged between five and 11 in South Australia, but only around 52,000 – roughly 35 per cent – are booked in for two vaccine appointments.

Some children starting reception will be aged four and are unable to get vaccinated.

Falkenberg said parents who want to keep their children at home could access educational resources on the Department for Education website, but teachers shouldn’t be expected to offer virtual lessons if they are also providing face-to-face learning.

She said principals were calling for greater clarity about when and how schools would reopen, with just three weeks left before the scheduled start of term one.

“Our position has always been to follow the health advice and what principals are currently thinking about are possible scenarios not knowing exactly what it will be,” she said.

“There are teachers saying ‘what might be happening?’, there are parents saying ‘what do you think will happen?’ and so sometimes principals are the recipient of a lot of questions which just becomes exhausting.

“If Friday is decision time, then at least there’s a plan going forward and they can respond to that.

“Ideally, we would hope that there are principals involved in the decision-making about how it’s managed going forward.”

Falkenberg said she was also concerned about the impact of escalating COVID-19 cases and close contacts on regional and remote schools, some of which struggle to recruit and retain staff.

The Queensland Government announced last week that it would delay the start of the school year by two weeks to protect children, staff and families amid a wave of Omicron cases.

But Marshall said this morning that South Australia would reach its COVID-19 caseload peak ahead of Queensland – likely before the end of this month.

“Queensland actually started (their school calendar) a week earlier than us, so they’re (now) scheduled to start a week later than us,” he said.

“We’ll consider what our starting date should be, but we also know kids do much better face-to-face in terms of their learning.

“Our primary focus at the moment is to do it as safely as possible for the students and for staff and teachers at the schools.”

“Our objective is go back, stay back, day one term one,” Morrison said this morning.

SA Health will publish an update on today’s COVID-19 case and hospitalisation numbers later this afternoon.

There were 4506 new cases reported in the state yesterday and one death – a man aged in his 90s.

Of the 176 people with COVID-19 in hospital in SA, 102 are fully-vaccinated, 14 are either unvaccinated or partially vaccinated, and 60 have an unknown vaccination status.

Meanwhile, Marshall admitted he was offered priority testing after being identified as a close contact of his daughter, who tested positive for COVID-19 on Saturday after a family gathering.

The Premier, who has since returned a negative test result and is isolating at home until Friday, said he declined an initial offer from SA Pathology to get tested at his house and instead visited the Victoria Park testing clinic. 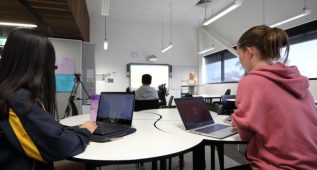 “Professor Tom Dodd wanted to find out whether I was positive or not because that would have had implications to the media and (chief public health officer) Professor Nicola Spurrier,” he told ABC Radio Adelaide.

“I did receive a faster response because of the danger of my position with those two critical groups.”

Marshall said his isolation was going “extraordinarily well” and working from home was “not hugely inconvenient”.

“Nearly all of my meetings now are not face-to-face, I think it’s just where we are at the moment,” he said.

“We’ve just got to do everything we can to stay safe during this period.”