Business SA CEO Martin Haese took to Facebook on Wednesday to suggest a rethink of the State Government’s daily case numbers update, which is now being provided by the Premier at an early afternoon press conference each day.

“I am beginning to wonder whether the daily reporting of Omicron numbers is serving any useful purpose,” Haese wrote in a Facebook post. 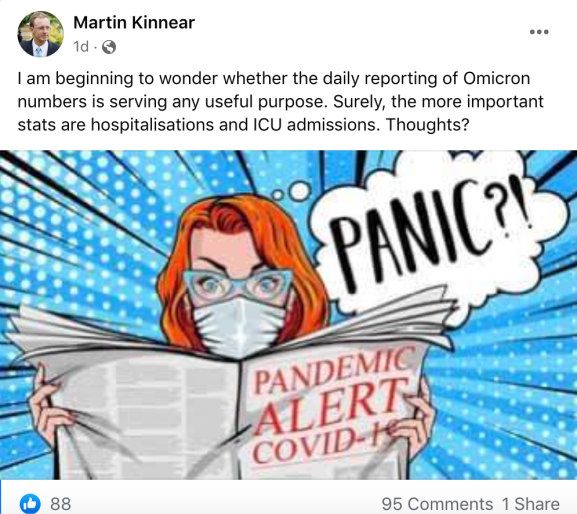 Haese told InDaily his post reflected the views of “many within the business community”.

He said the “daily relentless focus” on case numbers was having “a material impact on consumer confidence”.

“Consumers have been terrified in some instances and have been very cautious about going out,” he said.

“I’m asking the question … and I think this public debate needs to be had: how long should we be reporting the daily Omicron figures?

“How much is that contributing to the nervousness, the fear amongst us as customers, as consumers in South Australia?

“And then what impact is that having on businesses?”

Haese highlighted that the state’s hospitality and tourism sector is dealing with the ongoing impact of tighter capacity restrictions, which are scheduled to be in place until at least the end of January.

He said while Business SA welcomed the State Government’s latest financial support package, “no amount of government stimulus can plug the leaking hole”.

“What businesses really want is they don’t want stimulus, they want customers,” he said.

“South Australia needs to regain some semblance of confidence.

“The daily relentless focus on the numbers, I just wonder whether we need to have a public discussion about what purpose that is serving.”

Daily reported cases in South Australia have surged from just 25 on December 15 to 3493 on January 5, with experts predicting a peak upwards of 6000 a day by mid-January.

Hundreds of people have been admitted to hospital with the virus since South Australia’s borders opened on November 23, while four people with COVID-19 have died.

Nearly 89 per cent of the state’s population over the age of 12 is fully vaccinated, according to SA Health.

Premier Steven Marshall has since December 20 provided the state’s COVID-19 numbers at a detailed daily press conference, usually around midday.

However, for a brief period after opening the state’s borders on November 23, the State Government typically only provided case numbers via a low-key afternoon email update from SA Health in an apparent bid to normalise the introduction of COVID-19 into South Australia.

Haese said he was not “putting my head in the sand” by calling for a reduction in daily case reporting, but calling for a debate about “what useful end this is serving, because the collateral damage at the other end might be greater”.

He said it was “inevitable” the State Government would eventually have to re-adjust its strategy.

“There’s such a relentless focus from the government, from the health authorities – it’s being reported by the media but that’s the media’s job,” he said.

“Other jurisdictions are easing off their reporting around the world and getting on with it.

“I’m encouraging South Australia at some point to do the same.”