Cregan is currently sitting in a commanding position, according to mysterious polling that has been doing the rounds in state political circles.

InDaily has confirmed that the poll was conducted by NZ-based Community Engagement Ltd, run by pollster Eric Goddard.

Goddard told InDaily: “I can confirm we’ve conducted that poll”.

However he declined to identify who had commissioned it, saying: “It’s our policy not to disclose our clients.”

A touch-tone automated phone survey of 437 respondents conducted in Kavel between December 10 and 16 put the incumbent independent on 45.3 per cent of the primary vote, well ahead of recently preselected Liberal candidate Rowan Mumford on 18 per cent. 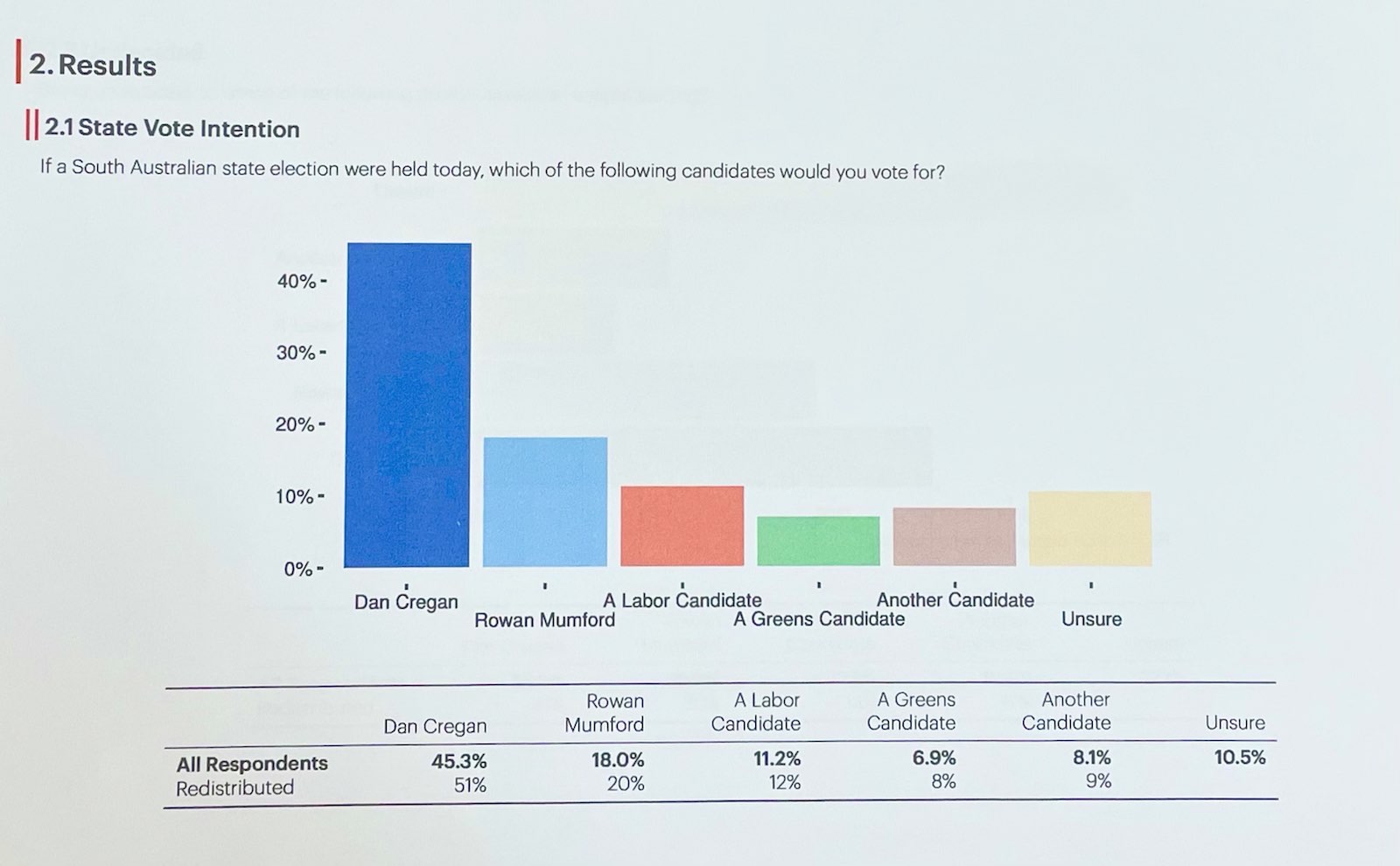 Primary voting intentions for Kavel candidates, in a page from leaked polling obtained by InDaily.

Goddard told InDaily Mumford was described to recipients of the poll as “Liberal candidate Rowan Mumford”, while Cregan was identified as “Independent MP Dan Cregan”.

Labor is yet to preselect a candidate for the seat, while the Greens are running Melanie Selwood – though she was not identified by name in the polling, which referred to “a Greens candidate”.

Just over eight per cent of respondents identified another candidate altogether, while 10.5 per cent were unsure.

Of the latter category, more than a quarter indicated they had a leaning towards the incumbent. 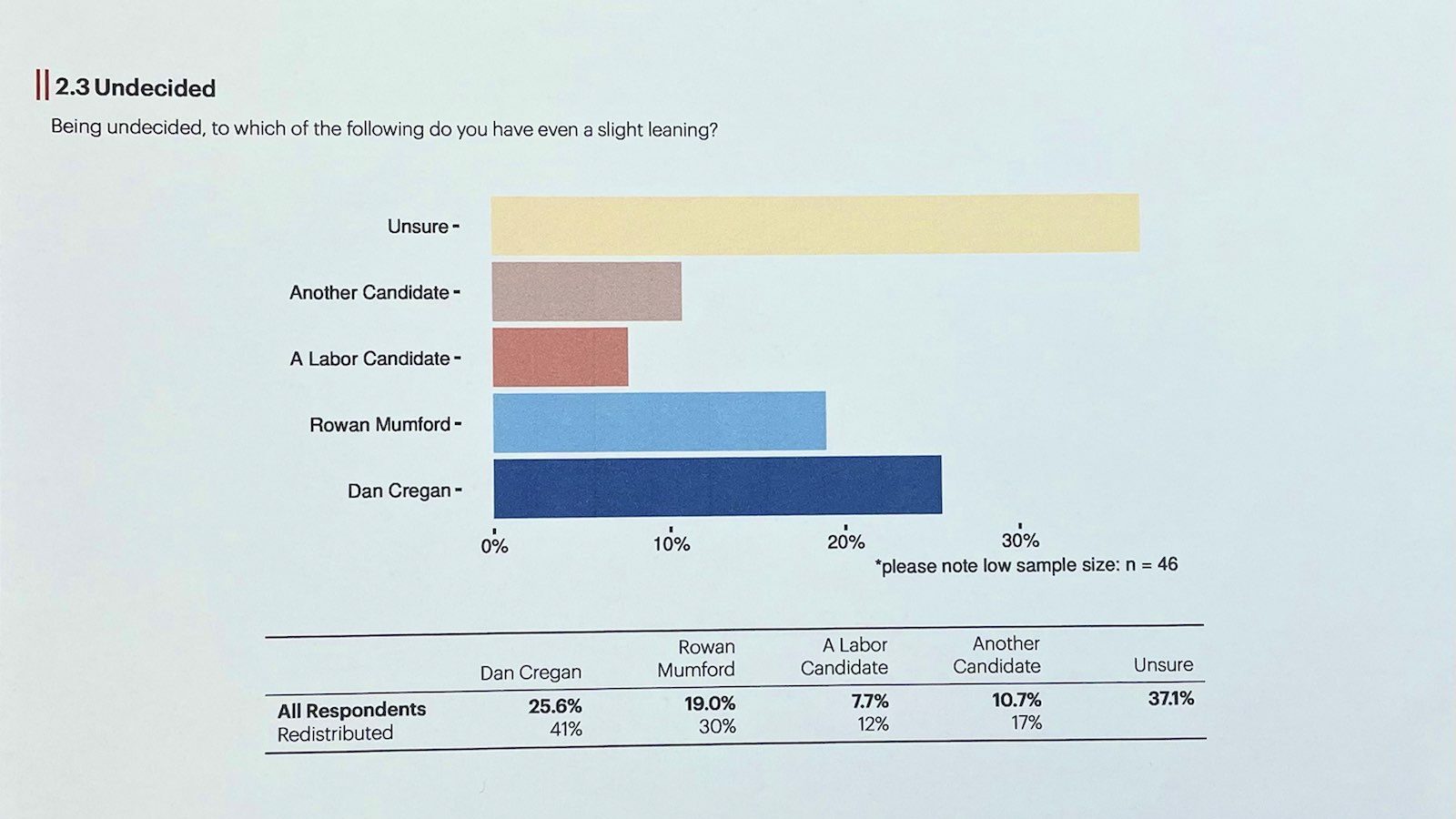 The polling data breaking down potential preferences of undecided voters.

The data was cell-weighted by gender and age “to reflect local population proportions”, after which Cregan’s nominal primary increased further to 51 per cent – enough to win the seat without preferences.

Given he is likely to receive much of the preference flow from Labor and the Greens, the poll suggests the Liberals will have a tough task dislodging their former rising star – even accounting for the poll’s stated 6.1 per cent margin of error.

Community Engagement said respondents were randomly selected from 8408 numbers “provided by the client” and another 11,411 “purchased from a commercial provider”.

A page from the polling data, describing the methodology.

The company behind the poll, which operates in Australia and New Zealand, was at the centre of controversy at the last federal election when the News Corp-owned Sunday Telegraph accused it of “push polling” in key marginal seats.

That prompted the NZ National Party to last year criticise Jacinda Ardern’s Labour for using the company, with Nationals Campaign Chair Gerry Brownlee saying in a statement it was “run by two ex-Young Labour Presidents, one of whom works in a taxpayer-funded role in the office of Labour Leader Jacinda Ardern”.

At the time, NZ Labour “utterly rejected… any allegation of push polling”.

“A number of our candidates use Community Engagement Ltd to run local polls for them,” Labour campaign manager Hayden Munroe told the NZ Herald.

“Community Engagement Ltd is a reputable pollster with a range of political, advocacy and corporate clients in Australia and New Zealand.”

The SA Labor Party is understood to use the pollster on occasion however told InDaily it did not commission this data.

Cregan told InDaily the poll was not commissioned by him, saying: “My focus is on my community not on polls.”

“We desperately need a second ambulance at Mt Barker, a new hospital and more investment in education to cope with population growth in the Hills,” he said in a written response.

“There has been a single ambulance at Mt Barker since 1992, which is impacting the whole district.

“For years inside government I argued that this needed to change. We now have the Government’s full attention.” 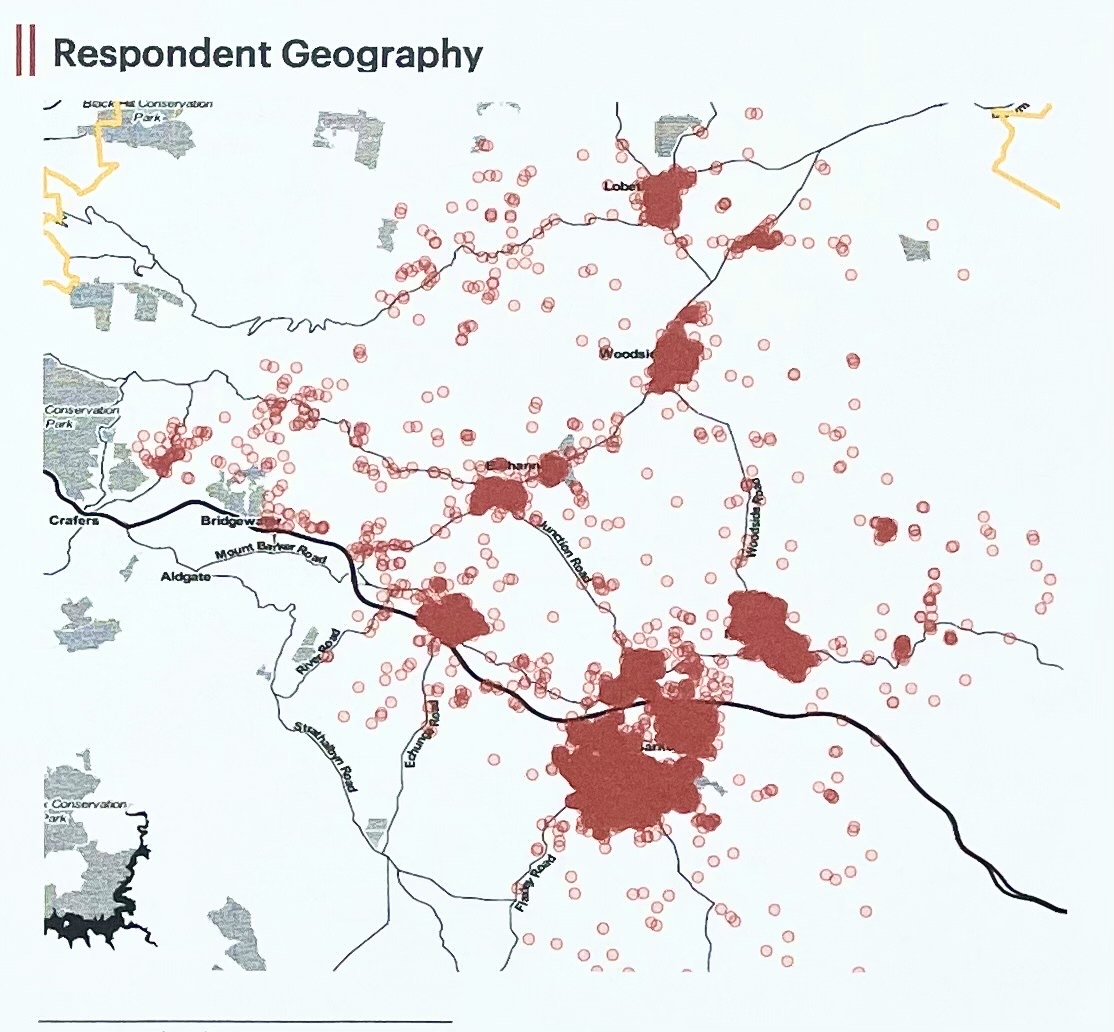 The poll covered respondents across the electorate.

It comes as The Australia Institute today released its own polling in the Hills district, which put federal Mayo crossbencher Rebekha Sharkie on a remarkable 58.5 per cent on a two-candidate-preferred basis, suggesting she will extend her tenure at next year’s federal poll.

Liberal insiders told InDaily the polling suggested Cregan was tapping into an independent sentiment that Sharkie has fostered.

“There’s a real independent flavour [in the Hills] that’s been backed in by Rebekha and her hard work,” one source said.

“They’re used to voting independent and, to be frank, they’ve got what they want – because the Federal Government’s spent a lot of money in Mayo.”

“This is ‘Rebekha Sharkie: the sequel’ now,” another said of the new polling.

“It’s got all the hallmarks.”

Cregan has previously indicated he hopes to hold the balance of power in state parliament after polling day, saying on his October defection: “I’d be happy to buy the Premier a pizza in Mount Barker after the election if I’m lucky enough to be elected.”