SA Health this afternoon confirmed the new case numbers, after Premier Steven Marshall earlier flagged there were likely to be “around 100” new infections, surpassing yesterday’s record of 80 cases.

“We encourage anyone who has been out in the community to monitor closely for symptoms and get tested as soon as they appear,” SA Health said in a press release.

The numbers are in stark contrast to before South Australia reopened its borders on November 23, when health authorities reported an average of around 4600 tests per day.

The sharp jump in testing demand has seen increased pressure on the state’s main testing sites, with interstate travellers and COVID close contacts waiting more than four hours for a test at the Victoria Park drive-through clinic in the city this morning.

Four hour waits at the Elizabeth South and Royal Adelaide Hospital testing clinics were also reported by SA Health over the weekend, along with three-hour waits at the Hampstead, Port Adelaide, Repat and Ridgehaven sites.

A total of 16,879 tests were processed on Saturday. South Australia recorded 80 new COVID-19 cases on Sunday, on top of 73 on Saturday and 64 on Friday.

Ashley Barrow waited more than four and a half hours at Victoria Park this morning for his day six test, after flying into Adelaide from Melbourne last week to attend the Ashes.

“I’m from Victoria and we don’t wait this long there for a test,” he told InDaily.

He urged SA authorities to “speed it up”.

“People are happy to wait an hour but three, four hours is just too long,” he said.

“If you want people to get tested you’ve got to make it easier for them.” 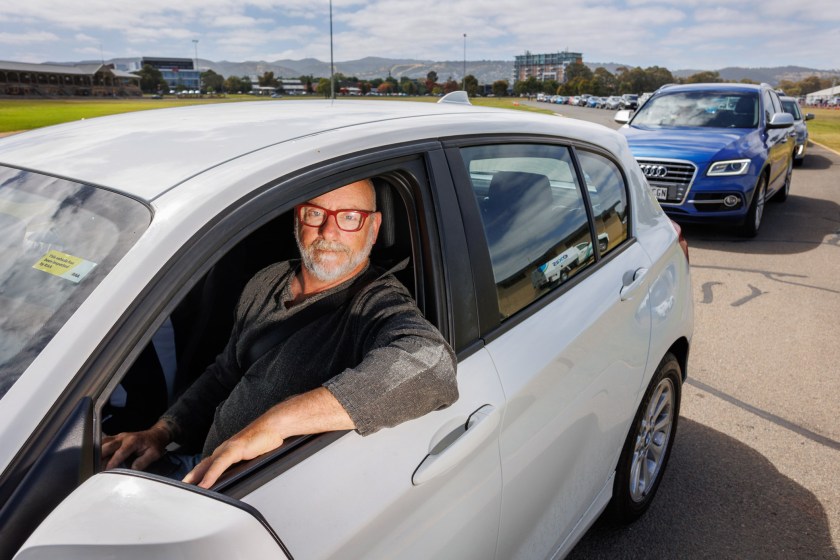 He said the last time he was tested at a drive through clinic in Victoria he waited 20 minutes.

There were two large queues at Victoria Park this morning – one lane for bookings which snaked out onto Wakefield Road, and another for people who hadn’t booked.

Barrow said he had seen several cars pull up and then drive off, likely because of the long wait.

“You’ve got a testing station with only two lanes here,” he said.

“My last testing station in Victoria had seven lanes.”

Barrow said his experience at Adelaide Airport when he arrived last week was no better.

“I had 200 people in front of me waiting to get tested – that’s not acceptable,” he said.

“You can throw as much money at something but we’re a small state and there’s only a certain number of people here,” she told ABC Radio this morning.

So there’s no way we could be criticised to say we haven’t put the resources at it, we certainly have.

“So we have certainly been recruiting and employing and training many people to do the contact tracing, and the same is said for SA Pathology.

“As a community, we just have to be mindful that there’s only a certain number of people in South Australia that can do these jobs.”

Spurrier said it was “all hands-on deck” for SA Health and SA Pathology at the moment, and those looking for a job over the Christmas period should check SA Health’s website.

“We’ve been recruiting and training, that’s a big part of what we’ve been doing in SA Health,” she said.

“So there’s no way we could be criticised to say we haven’t put the resources at it, we certainly have.”

Many people InDaily spoke to waiting at Victoria Park were unaware you could book in for a test, including Nada Benovic who at 10.30am had been waiting two hours.

“I’ve come here to get tested because I have a sore throat but I don’t know how long it’s going to take,” she said.

“Maybe I should have booked but I didn’t know that you could.” 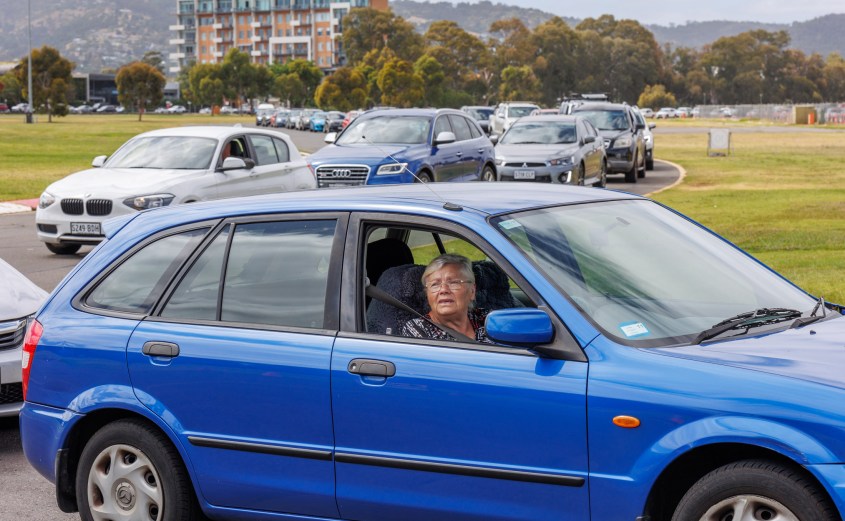 Another man, Garth, who asked InDaily not to publish his surname, had also been waiting two hours by mid-morning with his wife and daughter after first being in the wrong queue.

“We made an appointment, we got told to come here early, so we came here early and we got punished by getting stuck in the standby queue because we were too early to wait in the queue but they’re not telling anybody that,” he said.

“There’s people in the standby queue who don’t know why they’re suddenly being cut off by the booking people, people running out of petrol, nobody happy.

The family is getting tested before going interstate for Christmas.

“We are hearing horror stories of people having to wait six hours for a test,” he said.

“These are people doing the right thing, sometimes having to have their kids in the car, waiting for that long – it’s completely unacceptable.

“We’ve had two years to prepare for this, two years to put the resources in place and make sure there’s sufficient staff and clinics and testing capacity but clearly the system is completely falling over.”

Picton said it was “disturbing” to hear of people leaving testing sites because the queues were too long.

“That obviously puts people at risk,” he said.

The demand for testing is set to grow as more people come from interstate this week for Christmas.

“We know that’s going to put additional demands in place, we know that the case numbers are also going up so that means there’s going to be more and more close contacts identified that are going to need to be tested,” Picton said.

“The Government has had days and days of these awful stories of testing queues and have taken no action to increase capacity – that urgently needs to happen now otherwise we’re going to see this situation completely spiral out of control before Christmas Day.”

“SA Health are turning those test results around within between five and nine hours at the moment, so it enables our contact tracers to get on top of things pretty quickly,” he told ABC Radio.

“But people coming into South Australia would have already had a negative PCR test within 72 hours of having arrived in Adelaide, so we’re managing the risk that way.”

Victoria today recorded 1302 new COVID-19 and no deaths. There are currently 406 patients in the state’s hospital with the virus, including 81 in intensive care and 43 on ventilators.

New South Wales recorded 2501 new cases and no deaths, although 261 COVID-19 patients are now in hospital amid mounting pressure for the NSW Government to bring back recently dropped mask mandates.

Stevens said NSW was “probably at a point where the ability to have any level of control of the spread of the virus through the community has been lost”, but said SA is yet to reach that point.

“We’re able to take steps to minimise the impact on our system by having some control measures in place,” he said.

“One of those control measures is negative PCR testing for people entering South Australia, and only vaccinated people crossing our border.”

Marshall this afternoon told reporters the Prime Minister had brought forward a national cabinet meeting scheduled for Wednesday, to tomorrow, to consider issues around the nation’s response to the Omicron variant, including quarantine requirements.

“We have been adjusting our test, trace isolate and quarantine on a constant basis since the 23rd (of November when borders opened),” he said.

More than 1830 close contacts are currently in quarantine.

Asked if the Government would put more resources into testing to reduce wait times, Marshall said SA Pathology had already put on an extra 300 staff in the past month.

“The good news is that the turnaround time on the test results is still holding up pretty well – about 90 per cent of all results are coming back within 12.5 hours.

SA Health has not listed any new COVID-19 exposure sites since Saturday evening, which Spurrier said is a result of a “streamlining” the contact tracing process.

“We are focusing in our [contact tracing] interviews on really our highest risk areas,” she said.

“When we are getting 80-plus cases a day, we will be focusing on those high-risk areas individuals and high risk places that they may have visited.”

Stevens said it was “always expected” that when case numbers grow that contact tracers “will have a limited capacity to investigate every possible contact”.

“As much as it would be ideal to make contact with every possible close contact of a positive case, the reality is that with positive cases in the double digits every day that’s just not going to happen to the same extent,” he said.

Ban on rapid antigen test sales to end in ‘near future’

Rapid at home COVID-19 tests could be approved for general sale “in the near future” once South Australia reaches 90 per cent double dose vaccination and case numbers further increase, the chief public health officer says.

Rapid antigen tests (RATs) can return a positive or negative COVID-19 result in around 10 minutes, although are considered less accurate than a PCR test which take hours to process.

SA Health approved the rollout of RATs to hospital, ambulance, pathology and radiology staff earlier this month, although the general sale of the product in SA remains prohibited.

But Spurrier said this morning that the ban could lift once South Australia passes the 90 per cent vaccination mark.

“There are differences between the rapid antigen tests, and we’ve been focusing on getting the more sensitive and specific ones into our hospitals, we’re looking at aged care as well, and into doctors’ surgeries,” she said.

“[We’re] focusing on those high-risk areas because that’s where people are most likely to become really sick with COVID and if we’re looking at saving lives that’s where we need to focus our effort.

“But we will be lifting the restriction on sales for rapid antigen testing in the near future.

“In our response at the moment as our vaccination rate is getting up towards 90 per cent … and we have more cases in the community, that’s when the rapid antigen testing will be most useful.”

As of Saturday, 86.1 per cent of South Australians over the age of 12 are fully vaccinated, while 91.7 per cent have had at least one dose.