To be called “Tarrkarri – Centre for First Nations Cultures”, the building will house art galleries, performing arts spaces, a shop, café, event areas and a commercial kitchen, with Aboriginal leaders hopeful that it will become a place for reconciliation and acknowledgement of Australia’s past.

Construction is slated to take 30 months, with an official opening date scheduled for early 2025.

Once complete, the building will span 12,500 square metres over three levels, making it bigger than the SA Museum and Art Gallery combined and one of Australia’s largest cultural institutions.

It has been designed by local architects Woods Bagot in partnership with New York-based firm Diller Scofidio + Renfro, with Aboriginal architects contributing to the project.

“Today we begin construction of a centre that will enable us to create a deeper appreciation of Aboriginal cultures nationally,” Tarrkarri’s Aboriginal Ambassador David Rathman said.

“When the First Nations people can tell that story, it becomes deeper, richer and lasting.

“The centre being built at this site will be the vessel that carries the story of Country, which is the very heart of my and my country’s existence.” 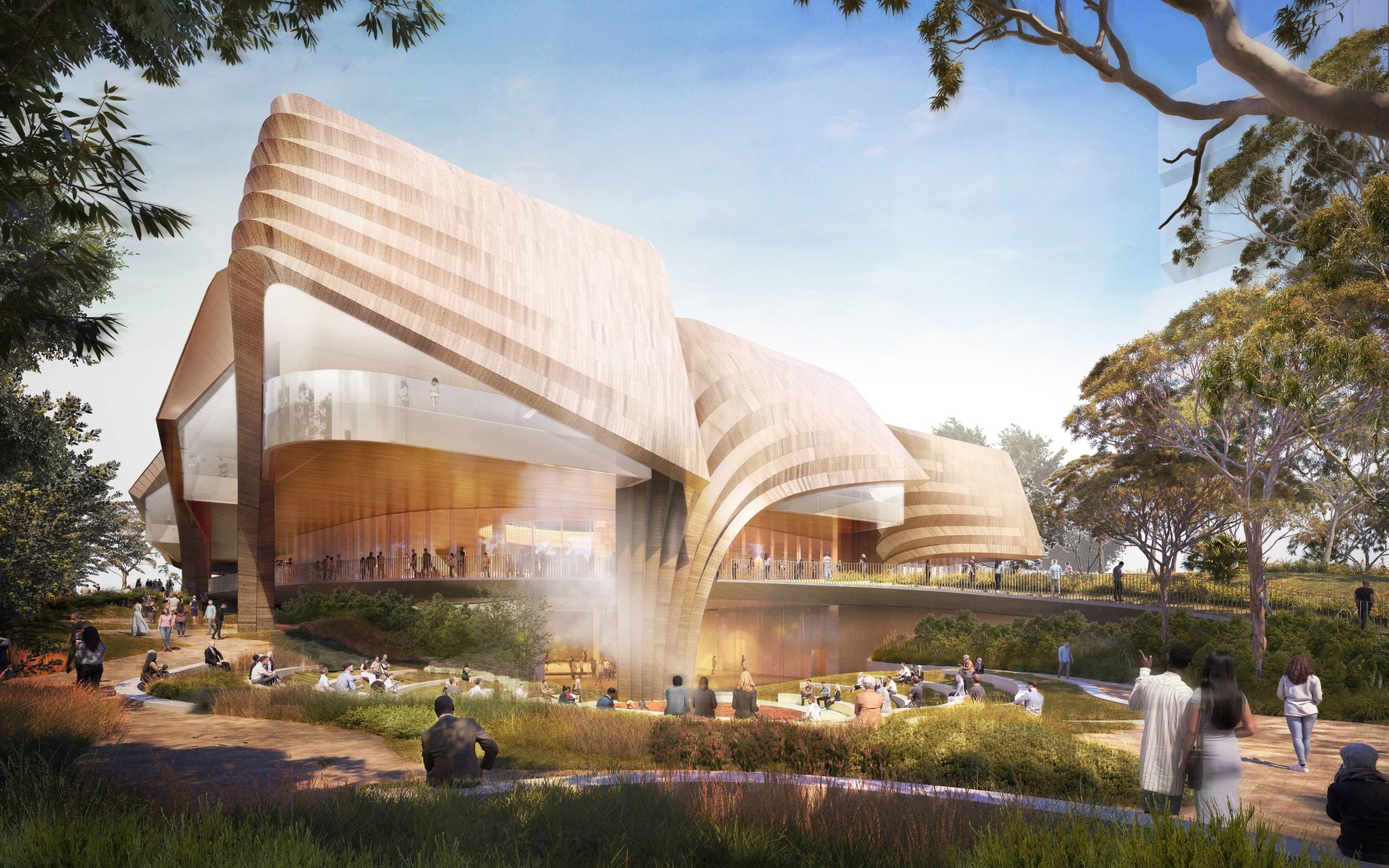 Ahead of the 2018 state election, Marshall announced the centre would be called the “Australian National Aboriginal Art and Culture Gallery”.

But the Marshall Government later dropped the word “national” from the centre’s title, with the Premier conceding that there was “further consultation that’s required and approvals needed at the federal level when you’re going to start naming things as national centres and we just thought it wasn’t necessary”.

Marshall today said it was “poetic” that Kaurna people had chosen to name the centre Tarrkarri.

“One of our oldest civilisations on this Earth have actually chosen to call this about the future, recognising and being very sympathetic and respectful to the past, but actually with one eye to the future,” he said.

Federal arts minister Paul Fletcher said Tarrkarri would be an “institution known around the world” and would play an important role in driving interstate and international tourists to South Australia.

“It is a common complaint all around the country that people who come to Australia from around the world struggle to find places where they can excessively learn about the depth and richness and magnificence of the 60,000 years of here on our 7.7 million square-kilometre continent,” he said.

The centre is expected to display pieces sourced from the SA Museum, Art Gallery and State Library collections – the majority of which is currently kept in storage – alongside new digital and performing arts displays that tell the story of Australia’s First Nations peoples.

The State Government will maintain ownership of the building, but it is yet to release a full business case or commissioned report into the centre’s proposed governance or operating model, citing commercial and cabinet confidentiality.

It instead has released a summary business case, which states the centre will be “the first of its kind in Australia” and will drive tourism to South Australia.

Marshall said the government was still finalising how the centre would be governed and managed, but it would be overseen by a board comprising a majority of Indigenous members.

But it is yet to appoint a director to oversee the institution, after cutting short a recruitment process earlier in the year.

A government spokesperson told InDaily in May that the Government had instead decided to readvertise the position “to enable further Aboriginal and Torres Strait Islander people to have the opportunity to apply”.

Marshall today said that the government intended to appoint a director closer to the centre’s opening.

Meanwhile, the state and federal governments have agreed to build a new $60 million “Digital Technologies Academy” at Lot Fourteen, which will offer digital and cyber-related training courses.

Marshall said the academy would train workers to fill an increasing number of “high-tech” jobs in South Australia.

“Increasing digital skills and capabilities is crucial to drive innovation and productivity in South Australia, while enabling our businesses to remain internationally competitive,” he said.