Another 1290 cases and two deaths in Victoria

Victoria has reported 1290 new COVID-19 infections and a further two deaths, as new research found three people in Melbourne contracted the virus for a second time.

The state is now managing 11,649 active cases despite 92 per cent of residents aged 12 and over having received two doses of a COVID-19 vaccine.

There are 323 patients in hospital, including 77 in intensive care with 40 needing ventilation.

Testers processed 55,122 results on Sunday, while 3266 people were vaccinated in state-run hubs.

The latest figures come as medical researchers discovered three people from a Melbourne household had contracted COVID-19 for a second time, one year after first becoming infected.

They tested positive for the virus in July 2020, with two of three suffering mild symptoms and the third reporting no symptoms, according to a study published in the Medical Journal of Australia on Monday.

The variant they contracted, pangolin lineage D.2, was not of concern. Then all three contracted the Deltra strain of COVID-19 in July this year, but only experienced mild symptoms.

While second infections are believed to impact less than one per cent of people, the researchers are urging people who have contracted the virus to still get vaccinated.

“Just because you’ve had COVID-19 and recovered from it doesn’t make you immune. You’re still at risk of getting COVID-19. Our only protection at the moment is the vaccination,” Monash University epidemiologist Mohana Baptista said.

Queensland has reopened to all vaccinated Australians today, 229 days since imposing a hard border on “hot spots” including NSW and Victoria.

The sunshine state has dropped entry restrictions for those who are fully vaccinated against COVID-19 and showing a negative PCR test.

Greater Adelaide had been declared a hotspot in late November.

The easing follows the state reaching the 80 per cent double dose vaccination milestone last week, with tens of thousands expected to travel north for the festive season in a much-needed boost for tourism.

Qantas and Jetstar expect to carry 10,000 passengers on flights to and from the state today, with most of the day’s flights fully booked.

While authorities have concerns over community transmission of the virus in the last week, police are confident their operations and border patrols are sufficient to deal with an influx of travellers.

“The current situation for COVID on the Gold Coast is one that we’ve been preparing for, for two years,” District Acting Chief Superintendent Rhys Wildman said on Friday.

“We are prepared and we are ready to deal with this and keep our community safe as we’ve done over the last nearly two years.”

Queensland Police will keep the same operations at five checkpoints on the NSW border, doing 100 per cent of compliance and border pass checks in quieter periods on the roads.

On the eve of Monday’s reopening, Queensland recorded one new case of COVID-19 in a traveller who arrived from Nigeria.

The state sits at 81.2 per cent of people aged 16 and over double-dosed against the coronavirus, with 88.3 per cent having had at least one vaccination jab.

Meanwhile, Western Australia’s premier is set to finally reveal when the state’s borders will open, ending months of speculation and frustration for locked-out families.

Mark McGowan is expected on Monday to announce a firm date for the reopening, which is likely to come in late January or early February.

WA’s double-dose vaccination rate for residents 12 and over is expected to have reached 80 per cent over the weekend, triggering the announcement.

The state’s borders are currently closed or heavily restricted to every other state or territory except Tasmania.

It’s anticipated the vaccination rate will have climbed to 90 per cent by the time the borders finally reopen.

South Australia has recorded 10 new COVID-19 cases and identified new exposure sites for one case, including a Rex flight from Melbourne to Adelaide.

Six are close contacts of a positive case, one acquired their infection interstate, while the remaining three cases are under investigation.

It brings the total number of active cases in the state to 64, including three people in hospital.

SA Health said a team will be sent to Indulkana in the APY Lands in the state’s far northwest to support increased testing and vaccination after COVID-19 was detected in the wastewater in the past week.

South Australia recorded its first two cases of the Omicron variant on Friday, but Premier Steven Marshall told a business lunch on the same day that there would be no lockdowns or “lockouts” ahead of Christmas. He repeated the message over the weekend.

Marshall has also revealed that health authorities are looking to reduce a newly-imposed quarantine period for vaccinated close contacts of Omicron cases – or suspected cases – from 14 days to seven.

The 14-day requirement was confirmed by chief public health officer Nicola Spurrier on Friday. She said SA was “more vulnerable” than other states to “immune-escape” from the Omicron variant.

The Premier told ABC radio this morning that the 14-day period would be reconsidered over the next couple of days.

“I’m hopeful that in the next couple of days we can reduce that now to seven days for people who are fully vaccinated,” he said.

South Australian students will receive their Year 12 results this morning, with the State Government claiming a record number of students have completed their South Australian Certificate of Education (SACE).

More than 1000 students were awarded merits.

Students will receive their results online from 8.30am.

England hints at Adelaide return for Anderson and Broad

England head coach Chris Silverwood has hinted that both Jimmy Anderson and Stuart Broad will be back to lead the Ashes fightback in Adelaide, suggesting the pair are “fit and ready to go”.

The decision to leave out the two leading wicket-takers in the country’s history for the series opener at The Gabba proved divisive among fans and pundits alike, with concerns over Anderson’s match sharpness and Broad overlooked in pursuit of a more varied attack.

England’s heavy nine-wicket defeat in Brisbane could hardly be pinned on the bowlers, with a first-innings total of 147 and a day four collapse effectively settling matters, but with pressure building and backs against the wall it seems inconceivable that the veteran pair will not re-enter the fray.

The second Test is a day/night affair under floodlights and both men have used the past few days to hone their skills with the pink Kookaburra that will be used.

Silverwood stopped short of confirming they would be in the XI on Thursday but admitted there was nothing holding them back after four days of tuning up in the nets.

“We’re lucky we’ve got two England greats in Broad and Anderson, so we’ve got a wealth of experience,” he said.

“Jimmy will be fit and ready to go for the second Test, as will Stuart. Yes, they are available. Certainly, from an experience point of view, with the bowlers we’ve got heaps of experience so I’m happy with that.”

Broad gave a memorably angry television interview when he was left out of the first Test of the 2020 summer, using his frustration to spur a superb run of form on his recall.

This time, though, he has reacted with disappointment rather than rage and used his Mail on Sunday column to say he was not minded to “kick up a stink”.

“Stuart has been great, to be honest, obviously he was disappointed not to be playing but he understood that this is a long series,” explained Silverwood.

“Everybody will put their hand up to do the hard work out there and he is ready to do that now. We had good conversations with Stuart before any decisions were made and he was 100 per cent on board.

“I’ve not told anyone they are playing yet. We will have some sore bodies from this Test and we’ll make decisions from there.” 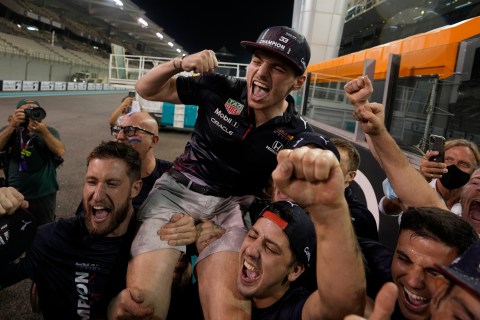 Max Verstappen has eventually been able to celebrate his maiden Formula One world championship after two appeals from Mercedes were rejected by race stewards following the Dutchman’s thrilling last-race, last-lap victory at the Abu Dhabi Grand Prix.

The Red Bull driver stormed past title rival Lewis Hamilton in the closing stages of Sunday’s season-ending race at the Yas Marina Circuit, having benefited from a late safety car that bunched up the pack.

Hamilton had appeared to be charging to glory, easily holding Verstappen at bay in the closing laps only for a crash for the Williams of Nicholas Latifi to change the course of motorsport history.

Confusion reigned as Australia’s under-fire race director Michael Masi changed his mind to allow lapped cars to pass the safety car, meaning Verstappen had a clear run at Hamilton in the final lap and on much faster tyres.

The Dutchman broke into tears as he crossed the line, professing his love for his team and sitting by his car after bringing it to a stop.

But Mercedes immediately launched two appeals against the result, one against Verstappen for allegedly overtaking under a safety car and a second claiming a breach of rules regarding race restarts following a safety car period.

Both were dismissed after the two teams spent hours in the stewards’ office, Verstappen able to toast his title more than four hours after crossing the finish line.

“It’s unbelievable. I kept fighting the whole race. I had the opportunity in the last lap. It’s incredible, I’m still having a cramp. It’s insane,” Verstappen said afterwards.