It comes as SA Health today reported 13 new coronavirus cases, but authorities are yet to determine if any of those infections are linked to the Omicron variant.

Two acquired the infection overseas, five became infected interstate, four were close contacts of local positive cases and two contracted the virus locally but the source of their infection is unknown.

Marshall told reporters this afternoon that the state’s transition and directions committees would meet tomorrow to discuss plans to lift internal restrictions once 90 per cent of South Australians aged over 12 are fully-vaccinated.

He hoped that an announcement about when and which restrictions would lift would follow the meetings.

“We need to determine and give certainty to the people of South Australia in terms of what day we will get to 90 per cent and what restrictions will be reduced at that point,” he said.

“I’m hopeful that this week – whether or not it happens at tomorrow’s (transition committee) meeting, but hopefully this week – we’ll be able to provide that certainty so that people can plan.

“Obviously the closer we get to 90 per cent, the more information we’re going to have on Omicron and that’s a very important game-changer.

“More information is coming in on a daily basis and we’ll refine those plans as we get closer to 90 per cent.”’

Under South Australia’s “COVID-Ready Plan”, restrictions on “most activities” will ease once 90 per cent of the population aged 12 and over is double-vaccinated.

Only fully-vaccinated people will be allowed to participate in “high-risk activities”, such as drinking alcohol while standing or visiting nightclubs.

Marshall said authorities planned to set a firm date for the easing of restrictions – similar to the decision to set November 23 as the date for reopening the state’s borders – meaning the changes could be made before or after the 90 per cent vaccination target is actually reached.

The Premier reiterated his hope that South Australia would reach the target before Christmas, but noted the data showed the state was still “three weeks away from when we can get to that full vaccination rate”.

Latest SA Health data shows 84.2 per cent of South Australians are fully-vaccinated, while 91.1 per cent have received at least one dose.

Meanwhile, the number of close contacts in quarantine in SA surged to over 2300 on the weekend before dropping to 908 today, with SA Health imposing tougher requirements on those who visited sites linked to confirmed or suspected Omicron cases.

Under new rules announced on Friday, vaccinated and unvaccinated close contacts of Omicron cases would be forced to quarantine for 14 days instead of seven.

Marshall said he was hopeful that the quarantine period would return back to seven days in time for Christmas, but authorities were still trying to gather information about the Omicron variant.

Asked to respond to concerns that people would be forced to quarantine over Christmas, Marshall said “most people are just excited that we’ve opened up our borders”.

“We’ve reunited families, business opportunities (and) we’re going to have a normal Christmas,” he said.

“For 1.8 million people to have a normal Christmas it does mean those people that are infected and close contacts of those infected will need to isolate and make sure that they’re not spreading it (COVID-19) around. 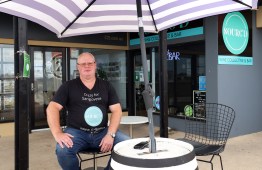 “It is a sacrifice and we appreciate that sacrifice that is being made.”

Marshall said the transition from a COVID-19 “elimination” strategy to a “suppression” strategy had caused anxiety among the community, but he was pleased with the results so far.

“The reality is we’ve got two or three people in hospital almost three weeks into opening our borders,” he said.

“Yes, we are cautious at the moment and I think the people in South Australia want us to be cautious with Omicron.

“Nobody wants a massive outbreak here in South Australia in the lead up to Christmas.”