The recipients had attended an event hosted by former Premier Jay Weatherill, who was last week placed in hotel quarantine at Tom’s Court after testing COVID-positive following a high school reunion at Norwood that has become a super-spreader event, linked to 30 cases as of yesterday.

InDaily has been told Weatherill greeted attendees at the door.

However, it wasn’t until more than a week later, on Wednesday this week, that many attendees were contacted via email by SA Health.

An email was received by several who were at the event, saying health authorities “would like to make contact with you regarding a recent COVID exposure that may be relevant to you”.

“You are being contacted as you may have been at the Thrive By Five event at the Stamford Grand at the same time as a positive case if COVID-19 on 29/11/2021,” it continued, telling recipients to fill in a linked form “to notify SA Health you were at this location”.

“If you are vaccinated and have not had a test in the last seven days, you are required to get a test as soon as possible and isolate until you receive a result,” it said.

“You must get tested again in day 13 after your exposure.

By the time the email was received, that meant just five days of the required 14 in quarantine.

However, the attendees were taken aback to discover the email was sent as a group message to several attendees, with names and addresses clearly visible to all recipients. 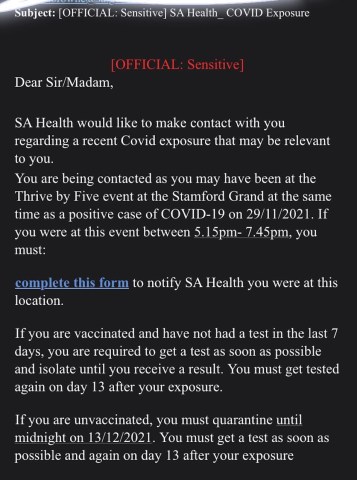 A screenshot of the email – recipients’ details had been removed before it was sent to InDaily.

In a statement, SA Health told InDaily: “A system error was identified as the cause of individual email addresses being visible in an automated group message.”

“An SA Health team including lead developers immediately investigated the error and additional processes were put in place to ensure it won’t happen again,” the agency said.

“We have apologised to those who were impacted by the error.”

It comes after attendees of the event had expressed frustration to InDaily after not being notified that the function had been designated a close contact exposure site until a week after it was held – despite widespread media reports that Weatherill had hosted the event days earlier.

SA Health has been dogged by IT glitches since state borders opened last month.

At the time, SA Health blamed a “technical issue”, saying “four Victorian LGAs were incorrectly listed as high risk for a short period” but that the issue “did not affect applications to EntryCheck SA”.