The app randomly prompts users to undertake a location check-in within 15 minutes, using live face recognition to confirm they are at their approved quarantine address.

Users have reported difficulties getting the app to recognise them, with experts warning facial recognition technology can struggle to differentiate between people — particularly women and ethnic minorities.

The app has been hit with overwhelmingly negative reviews on app stores, with some users reporting that the facial recognition system is extremely unreliable.

“Can only use the facial recognition in one location in the house – maybe a lighting issue,” wrote Anne Palmer.

“Photo too bright or too dark or failed due unknown error or that you moved when you didn’t. Sometimes it doesn’t like jackets or collared shirts,” said Scott Hallandal.

“Worst app … too hard to verify or check in even though you provide correct details,” wrote user Bikram Dangol.

The South Australian government claims the facial recognition technology it used has not demonstrated any sign of racial bias.

“HealthCheck SA uses innovative geolocation and live face verification technology which can be used by people of any age, ethnicity, gender or cognitive ability,” a spokesperson for the Department of Premier and Cabinet said. 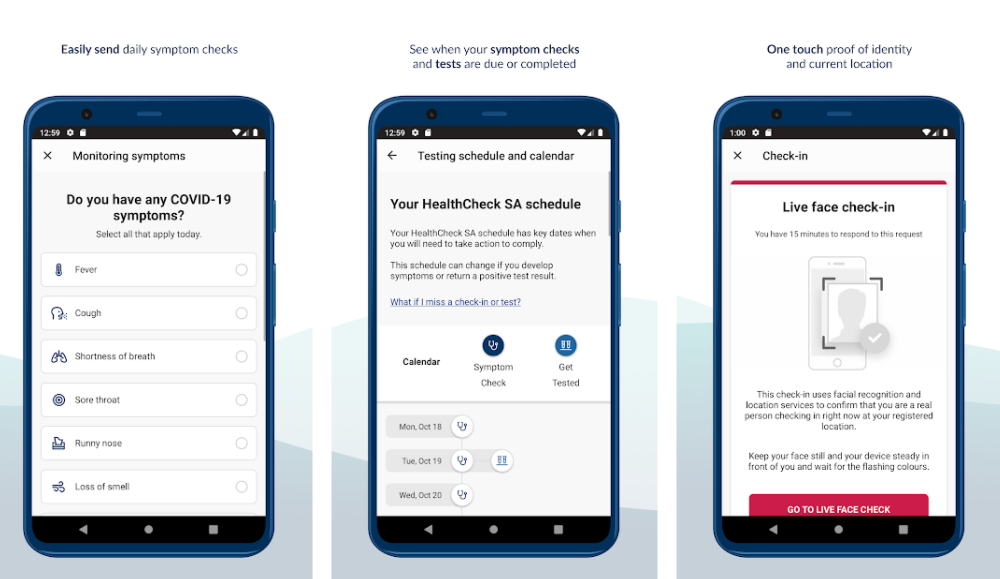 The HealthCheck SA app has been hit with overwhelmingly negative reviews.

UNSW professor of AI Toby Walsh told InDaily that all facial recognition technology suffers from racial and gender bias, warning that affected groups may find themselves flagged as in breach of home quarantine rules due to errors in the app.

He noted no independent audit had publicly confirmed that bias issues had been resolved.

Walsh suggested that if major tech giants like Google have been unable to solve this issue, “one has to be concerned” about the prospect of the South Australian government successfully addressing it.

The technology is also vulnerable to fraud by users who want to breach their home quarantine conditions.

Walsh said faces are one of the least reliable ways to verify someone’s identity, noting he has a twin who would be able to check in on his behalf using the app. He recommended fingerprint scanners, which now come standard with many smartphones, as more accurate.

He added that the app’s location verification checks are straightforward to fool, with methods available on YouTube for users to learn how to modify the GPS signal on their phones to covertly check in from a different location to their approved quarantine address.

“I don’t think my granny is going to figure out how to do it, but someone who really wants to beat the system is not going to have much trouble,” he said.

Three months on, Nelson doesn’t believe authorities have fixed the issues in the app after it was relaunched as HealthCheck.

“Singapore and Taiwan did some custom hardware for this which would have almost certainly been better.”

Experts backed ankle and wrist-tracking devices as superior for determining someone’s location every few minutes, rather than a couple of occasions during a quarantine stint.

“If the claims from tech experts are true about discrimination and easy workarounds on compliance, that’s cause for an immediate investigation and resolution of the issues,” said Labor’s health spokesperson Chris Picton.

The Department of Premier and Cabinet defended the security of the app, claiming it has undergone independent testing and provides industry-standard security for the storage and management of data.

Information collected by HealthCheckSA is encrypted and stored on a secure server.

“The app has stringent security features that ensure participant information is kept secure throughout the duration of quarantine,” a spokesperson for the department said.

Walsh noted the privacy policy of the HealthCheck app allows authorities to keep biometric data until the end of the pandemic.

“I suspect the pandemic may never end,” he said. “For most data there is some kind of sunset clause — two years, five years. It doesn’t fill me with hope that they’re planning to delete this data.”

Adelaide City Council is rolling out facial recognition for its CCTV network over the next 18 months, but insists SA Police will not have access to it until state parliament adopts legislation governing its use.

“The government is always considering new and emerging technologies and what protections and safeguards are in place,” a South Australian government spokesperson said.