Nick Takos, who was elected to the Adelaide Football Club board in March by a direct ballot of members, is in a standoff with the club over its mandate that all staff should be fully vaccinated by December 17, as InDaily exclusively revealed yesterday.

Takos and the Crows are yet to comment publicly on the circumstances surrounding the dispute, but the former club staffer – who now lectures on organisational culture and sport management at the UniSA business school – has been a vocal opponent of vaccination mandates on his social media feed.

His LinkedIn account features regular comments and activity in opposition to governments and organisations mandating vaccines, including regular endorsements of Flinders University immunologist Professor Nikolai Petrovsky, who has revealed he faces being barred from working in the SA Health system because he has refused to receive any vaccine but his own Covax-19, which has not been approved by the Therapeutics Goods Administration.

“Given the vaccines leak, is it only those who have been vaccinated for less than 6 months?” Takos asked.

In a response to a recent post by Port Adelaide chairman David Koch, who had received an award “from the Australian Marketing Institute on behalf of the small business community”, Takos wrote: “From what I can see, small business is being disintegrated by the current politicians.”

Takos is the second figure at the Crows to be caught up by the strict vaccination requirements – mandated for all employees by the club in line with an equivalent order from the AFL for all players and football department staff – with inaugural AFLW player and registered nurse Deni Varnhagen this month placed on the club’s inactive list after she refused the vaccine.

In response to a post about the standoff between Varnhagen and the club at the time, Takos posted to LinkedIn: “She has my 100% support.”

He recently liked a post by Drakes Supermarkets director John-Paul Drake, who announced: “Although we encourage our staff to be vaccinated, we accept that we live in a free democratic country and we all have a right of choice… while the choice is still available, I am not going to put my team in a position where they have to choose between autonomy over their bodies and their ability to earn a living.”

Drake sought responses from his LinkedIn contacts, with Takos replying: “Well said – stick to your principles until the end!”

Another respondent wrote on the post that “a hell of a lot more people died from Covid due to being unvaccinated [than] died from being vaccinated”.

To which Takos replied: “Yes and the elderly, sick and vulnerable are encouraged to be vaccinated to protect themselves. In my view we shouldn’t give up hard fought-for freedoms to force it on the healthy who are under 65, and have less than a ‘normal’ flu chance of dying.”

Throughout his timeline, Takos has liked several posts about anti-vaccine and lockdown protests in Australia and around the world, as well as posts deriding countries such as Austria for imposing a broad vaccine mandate, including posts comparing the move to the Holocaust.

Among those he has liked are posts featuring videos of “citizens marching to take back their country” and claiming “freedom is breaking out in Melbourne and around the world!”

Takos has also endorsed a number of posts deriding “Big Pharma”, including several by Petrovsky, for whom he has declared “support”, saying “what he says imo [in my opinion] should be considered as quite credible”.

Among those posts are statements by Petrovsky railing against alleged side effects from mRNA vaccines, urging clinical trials “younger individuals” to be halted.

Another reads: “Big pharma company rule book – promise anything, distract, and just keep selling the same old product even it is no longer working.” 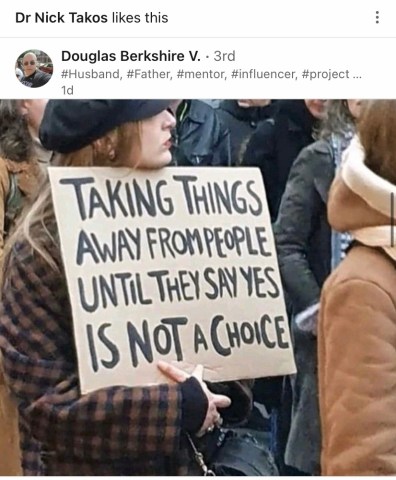 ABOVE AND BELOW: Other posts liked by Dr Nick Takos on LinkedIn 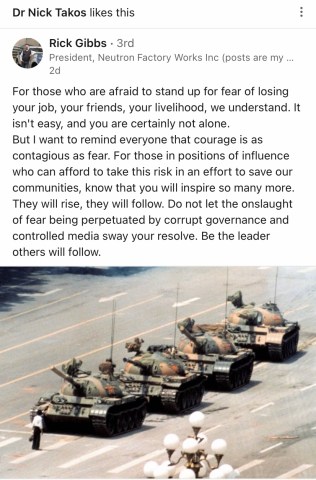 Yet another endorsed by Takos says: “As developer of one of the most successful vaccines on safety and efficacy – move over AZ, Pfizer and Moderna – I remain firmly against vaccine mandates – good vaccines don’t need to be mandated, just bad ones!”

In a further post liked by Takos, Petrovsky urges: “Free Australia from tyranny!” and argues that Australia “is playing from the same Nazi playbook to label opponents of vaccine mandates as extremists making death threats”.

Another post liked by Takos argued Australians who have received COVID vaccines have “been tricked” by “highly experimental technologies [which]  have no impact on transmission [and] will not by themselves allow life to go back to normal”.

Takos did not respond to inquiries about his position on vaccine mandates today.

The deadline for club staff to receive their first jab passed on November 19, but it is understood he remains on the club’s board – albeit unable to attend meetings or events in person.

While the club has made no public comment this week, chairman John Olsen has previously told FIVEaa that “the AFL has made it clear… that double vaccination is a requirement to fulfil duties”, adding: “It’s one in, all in”.

Takos’s stance is understood to be causing angst behind the scenes, with one insider telling InDaily yesterday: “You can’t ask your players and staff to do something that the leadership’s not prepared to do.”

There is broad scientific consensus about the value of the COVID-19 vaccines being used in Australia.

The advice of health authorities in Australia, including SA Health, is that the evidence shows the vaccines are effective in preventing symptomatic infection and severe disease. Research also suggests that the vaccines may reduce how infectious a person is if they do catch COVID-19, thus limiting its spread.