The Liberal party-room will meet to elect a new deputy leader after Chapman today quit that role, as well as stepping away from the frontbench pending an Ombudsman’s inquiry into allegations of conflict of interest and breaching the ministerial code of conduct.

The deputy leadership is an elected role, with Premier Steven Marshall declaring today he “doubted there will be an opportunity to revisit that” even if Chapman is exonerated by the Ombudsman.

“I think we need a Deputy Premier of SA, and to have that as an acting role I don’t think will be appropriate [but] I certainly think there’s an opportunity for Vickie to come back into the cabinet.”

In the meantime, lawyer turned first-term MP Josh Teague, who was evicted from the Speakership in the coup that installed ex-Liberal independent Dan Cregan, walks straight into the roles of Attorney-General, Planning and Local Government minister. 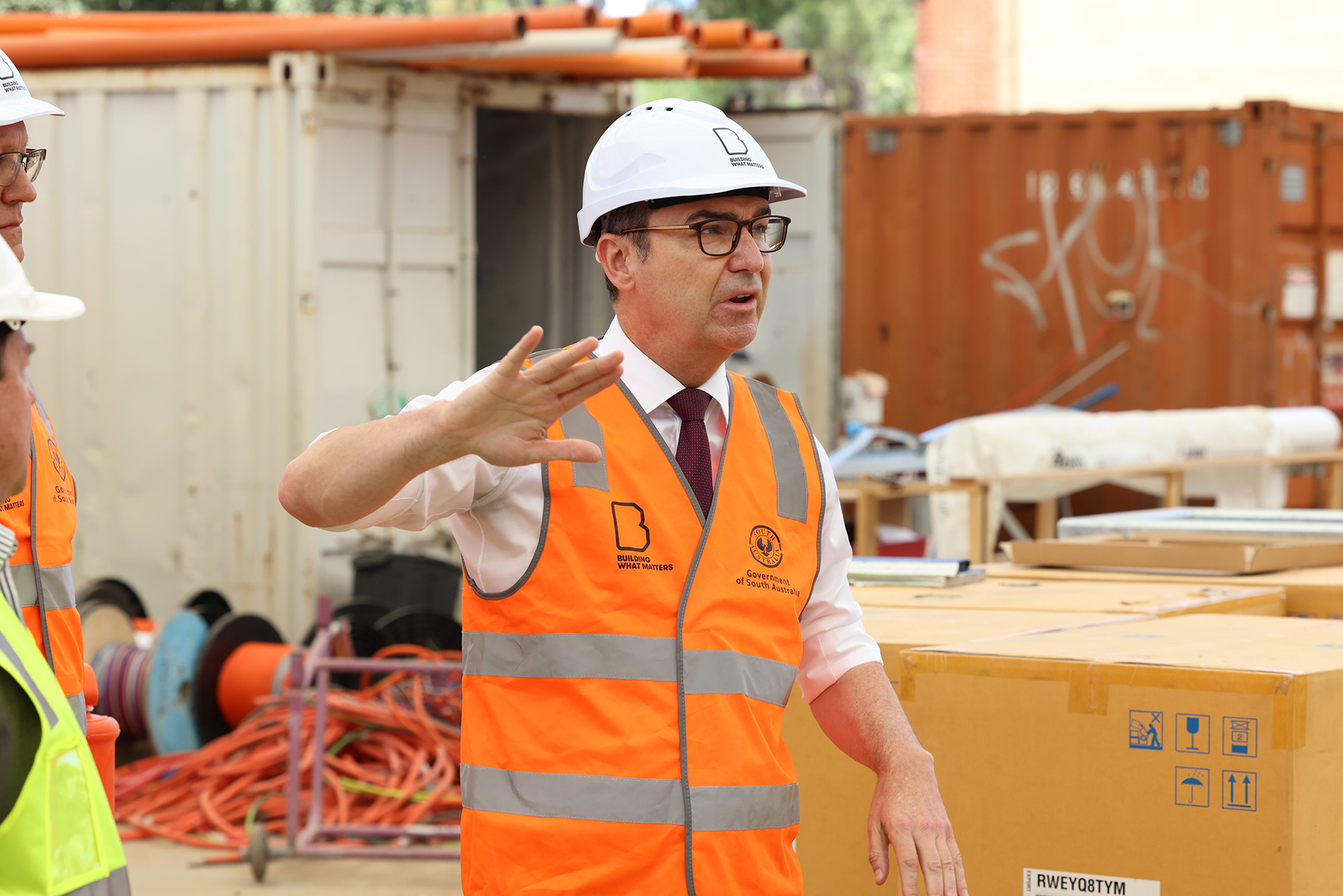 Party sources believe the most likely contenders for the deputy leadership are moderate-aligned John Gardner and David Speirs, who has cultivated support from the Right and centre-Right factions of the party, with Dan van Holst Pellekaan considered an outside chance to contend but unlikely to attract broad support in the lower house party-room in a three-cornered contest.

None responded to inquiries today.

Marshall said it was a “tough day for the Liberal family in SA”, saying Chapman had been “very tough, very mature” in relaying advice that she should stand aside pending the Ombudsman inquiry, because she occupied the office to which Wayne Lines must report.

“She handled herself very graciously in providing me her advice yesterday,” Marshall said.

“I certainly still remain 100 per cent behind Vickie Chapman and hope she’s still in the cabinet [after the inquiry]… I would expect her to return.”

The turmoil stems from Chapman’s decision, as Planning Minister, to veto a $40 million port proposal on her native Kangaroo Island, a move that effectively ended the business model of the project’s proponent, Kangaroo Island Plantation Timbers.

A parliamentary inquiry last week found Chapman had real and perceived conflicts of interest having, according to evidence to the inquiry, previously expressed concerns about the proposed port’s location and owning land used for an Airbnb adjacent a forest contracted to KIPT for removal.

Chapman, who did not front the media, said in a statement early this morning she “will be stepping aside as Attorney-General and Minister for Planning and Local Government pending the outcome of the Ombudsman’s inquiry” and “standing down as the Deputy Leader”.

“As the Ombudsman reports to the Attorney-General, it is entirely appropriate to step aside for the duration of the inquiry… I welcome the independent Ombudsman’s inquiry but it is important that I step aside to ensure there is no impediment to this process being undertaken,” she said.

“I do not wish in any way to compromise the Ombudsman or his delegate to be able to undertake this inquiry.

“I maintain that I have made the right decision in respect of the KI seaport proposal and that I had no conflict of interest, actual or perceived.”

The Ombudsman was asked by parliament to investigate “any matter relevant to whether or not the Attorney-General had a conflict of interest in determining the [port] application [and] any breach of the Ministerial Code of Conduct”, as well as “the role that any other public officer undertook relevant to the Attorney-General’s decision, including the role and responsibility of the Premier, Chief Executives and other public officers, including Crown Law Officers”.

Those chief executives are expected to include Caroline Mealor, who gave evidence to the inquiry that she didn’t consider it her role to advise Chapman she may have a conflict of interest, saying: “I don’t have the ability or resources to second-guess every decision the minister makes in determining there’s no conflict.”

However, asked today whether Mealor would be following Chapman’s lead in standing side pending the Ombudsman’s inquiry, her department told InDaily in a statement: “The Chief Executive has delegated all decision-making functions relating to the Office of the Ombudsman to the Executive Director, Legal and Legislative Services for the duration of the investigation to ensure the integrity of the process.”

Marshall said while he was also a subject of the inquiry, it was “not necessary” for him to stand aside “because I don’t have responsibility for the Ombudsman”.

He said the investigation had a “broad scope”, adding: “There was certainly no finding against me in the report they’ve handed to parliament.”

Labor demanded Chapman go further than standing aside pending the inquiry, with Opposition Leader Peter Malinauskas saying she “must resign from cabinet”.

“At the very moment South Australians are looking for stable government they instead have a Marshall Liberal Government that is in complete chaos,” he said.

“Steven Marshall is now without a deputy premier, we don’t know who the Attorney-General’s going to be… hours before our borders open up, there’s no real clarity on what Steven Marshall’s plan is here.”

Chapman’s move late yesterday came despite last week holding firm against resigning in the face of a historic vote of no confidence in the House of Assembly, which prompted conservative crossbenchers to call for the Attorney-General to stand down.

Chapman is also facing a separate matter of privilege, which could see her face further sanctions including suspension from parliament if she is found to have misled the House when it resumes next week – which will mark the first time she has sat on the backbenches since early 2004.

While the moderate faction, of which Marshall and Chapman are prominent exponents, holds sway in the parliamentary party, a pair of weekend preselections gave the Right hope of restoring some balance, with conservatives Alexander Hyde and Rowan Mumford elected for Waite and Kavel respectively.

They’ll bid to win back those seats after incumbents Sam Duluk and Dan Cregan quit the party in recent weeks to run as independents.

Hyde will stand aside as an Adelaide City Councillor to contest Waite, after a bitter preselection campaign in which he beat a field led by moderate-aligned former party vice-president Cara Miller.

Mumford, the president of the Mayo FEC, was publicly implicated in the party’s controversial ‘Believe in Blue’ recruitment drive in an anonymous email that was tabled in parliament earlier this year by Kavel incumbent Cregan, making them subject to parliamentary privilege.

The emails – which prompted an internal party investigation that resolved to crack down on future “misuse” of its members’ “private email addresses” – told Mumford he was “involved in introducing hard-right Pentecostal Christians into the party and have signed up about 90 already [which was] causing a lot of friction with existing members”.