Crossbench members were last night calling for the Attorney-General to stand aside after she lost the confidence of the lower house – the chamber in which government is formed – in a vote following the tabling of a report that found she had repeatedly misled parliament and breached the ministerial code of conduct.

The report found Chapman had real and perceived conflicts of interest when she vetoed a $40 million timber port on her native Kangaroo Island in August.

She did not make any public statements after the vote, but her office said it would be business as usual for the Attorney today.

Bell, the MP for Mount Gambier, told InDaily outside parliament he hoped a constitutional crisis could be avoided.

“It’s going to put a very new Governor under a lot of pressure… there are mechanisms for that – but there’s also conventions,” he said, referring to the Westminster convention that a minister who loses the confidence of the lower house should resign.

However, he said, “it’s not for me to decide who does what from here – the House has made a decision”.

Cregan told InDaily last night that “as a statutory officer of the House, I’m bound to follow the House’s direction, and will seek an audience with Her Excellency in due course”.

“If it were the case that the Deputy Premier resigned, it follows that it would not be necessary,” he added.

Moderate faction colleagues, however, last night defended the Deputy Premier, with Vincent Tarzia declaring: “I think Vickie Chapman is doing a sterling job and I’m looking forward to her continuing her good work in the role.”

Leader of Government Business John Gardner continued the Government’s comparison with recent no confidence votes against then-Labor ministers in the Upper House who remained in the job, saying: “Clearly there was at least a minister a couple of years ago who lost the confidence of their chamber, and that precedent is set.”

Premier Steven Marshall has publicly backed his deputy to the hilt, but faces a torrid period ahead with an unsympathetic crossbench – and the prospect of further sanctions against Chapman, who still faces proceedings related to allegations of misleading the House.

Cregan last night ruled that there was a “prima facie” case for a matter of privilege to be brought against her, saying: “In my view, the matters raised in the report could genuinely be regarded as tending to impede or obstruct the House in the discharge of its duties.”

That will be debated when the parliament returns in a fortnight for an ‘optional’ sitting week – however, the Government snatched back some authority with a successful bid to overturn a recent change to sessional orders giving the Speaker power to recall the House for additional sitting days.

But a Government attempt to shut down parliament immediately – and not reconvene until May 3 next year – almost two months after polling day – did not find support.

Instead, it appears the crossbench will determine how many additional days parliament will sit between now and the election – and whether Chapman will be eligible to participate.

If she is not, the Government will only be able to rely on 21 votes in the 47-seat parliament, imperilling its ability to command a working majority.

The move to curtail parliament – and a subsequent attempt to limit debate on the issue – provoked angry scenes in the House, with Labor frontbencher Tom Koutsantonis declaring: “There is only one reason the Government feels that it is urgent to suspend standing orders, and that is to run protection for their embattled Deputy Premier who has just faced a humiliating no-confidence motion – the first passed since responsible government began in South Australia in the House of government.” 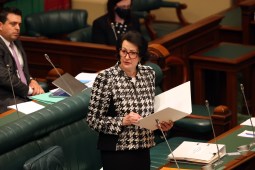 “How many bills are on the list here, which the Government said to us were urgent, that will now be abandoned?

The Government will, however, need additional sitting days to extend its emergency COVID powers – legislation that is expected to test its relationship with some of its own backbenchers.

“We’re entering a difficult phase of the pandemic as our borders re-open – families and small businesses have been through an extraordinary period of hardship,” Cregan said last night.

“They expect us to sit at least for the optional week to continue to scrutinise decisions made by the executive using emergency powers.”