A motion of no confidence was carried with 23 votes in favour on the floor of the House just before 3.30pm today, to 22 against.

It follows weeks of hearings about Chapman’s handling of a decision to veto a major port project on her native Kangaroo Island, with a long-awaited report by a parliamentary inquiry tabled this morning.

It found Chapman, as Planning Minister, had a conflict of interest, misled parliament and breached the ministerial code of conduct in relation to her decision to block the $40 million project – a move that prompted port proponent Kangaroo Island Plantation Timbers to rebadge and quit the island.

The role of the state’s new Governor Frances Adamson will now come under the spotlight, with the Opposition seeking to call on her to step in and remove Chapman from office – and Premier Steven Marshall insisting he has no intention to sack his deputy or stand her down.

The motion declared that the House of Assembly “no longer has confidence in the Member for Bragg to continue in her role as Deputy Premier, Attorney-General, Minister for Planning and Local Government, and as a Member of the Executive Council, for deliberately and intentionally misleading the House of Assembly and breaching the Ministerial Code of Conduct”.

It further “calls on the Speaker of the House of Assembly to present Her Excellency, the Governor with a copy of this motion, if adopted, expressing this House’s will that the Member for Bragg no longer serve as Deputy Premier, Attorney- General, Minister for Planning and Local Government and as a Member of the Executive Council”.

However, the Government successfully moved to have a clause requiring the Premier to “immediately advise Her Excellency, the Governor, to remove the Member for Bragg’s commission to serve as a Minister of the Crown” removed from the motion.

Opposition Leader Peter Malinauskas called the successfully passage of the motion “unprecedented”, saying he had asked the parliamentary research library to find another instance of the House of Assembly expressing no confidence in a minister, and being told that none existed. 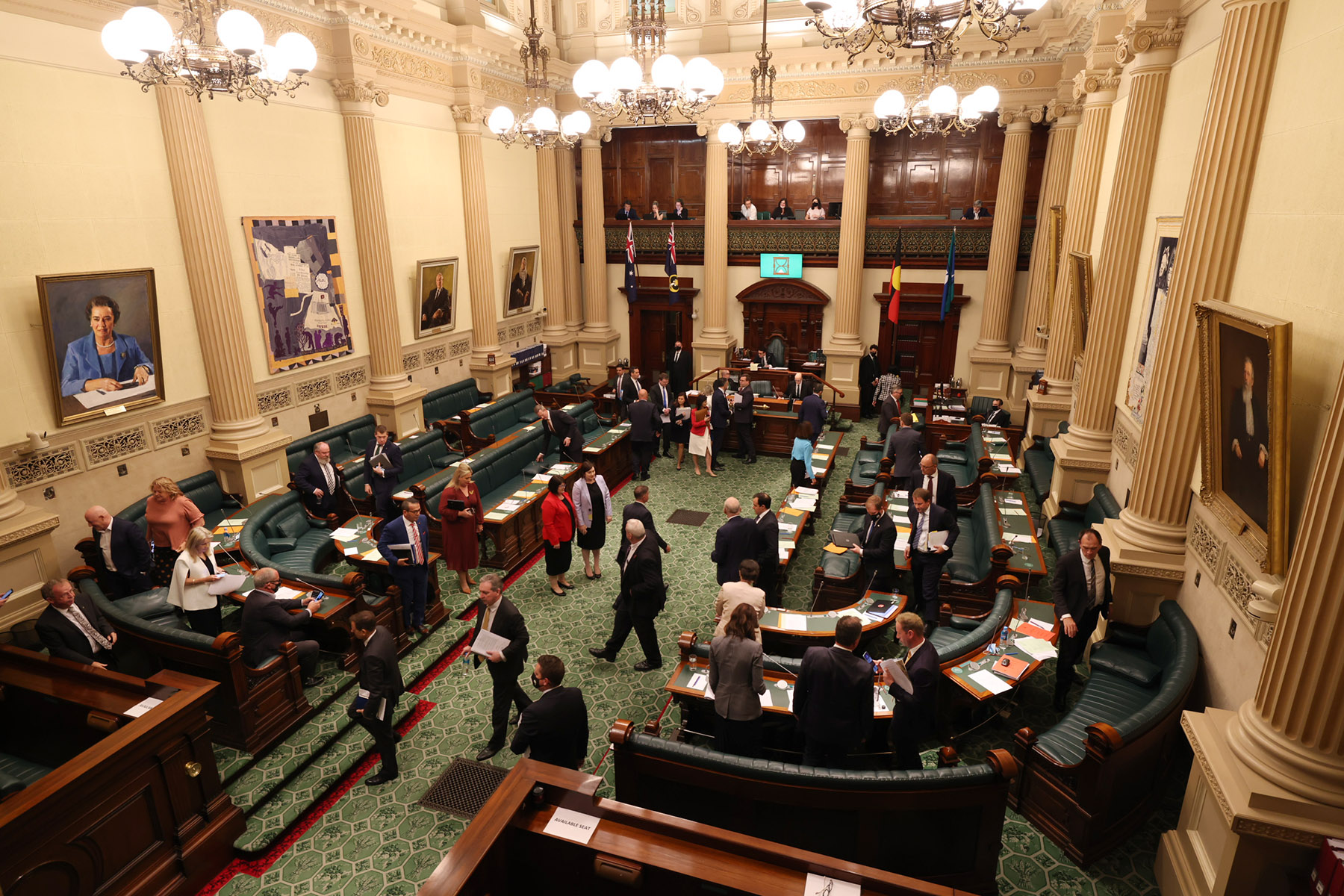 Ellis – the only crossbencher on the floor of parliament not to back the move – said: “I made it clear at the start of this that I wanted no part of it and that remains true.”

“We could be debating regional health or country roads, both critically important issues – instead we’re spending time on this,” he said.

However, his abstention – rather than backing Chapman – meant the matter was resolved without former-Liberal-turned-independent Speaker Dan Cregan having to cast a deliberative vote, which parliamentary insiders expected would have sealed Chapman’s fate in any case.

Chapman herself maintained a veneer of normality in the lead-up to the debate, moving and speaking on a variety of legislative motions and tabling several documents and reports related to her various portfolios as parliament resumed to consider her fate.

Labor frontbencher Stephen Mullighan told parliament Chapman had already expressed misgivings on the project before she was in Government and well before being handed responsibility for its fate.

“One wonders if she insisted on getting the portfolio of Planning [in 2020], knowing that this issue remained unresolved,” he told parliament.

“It should not have come to this – the simple truth is the Member for Bragg should have by now resigned as a minister of the Crown… not only has the member misled parliament and done it repeatedly, she has done so in such a manner that none of us can have any confidence in her conduct from now on.

“She now is tainted – she now has a proven reputation for misleading this House [and] worse, in her performance as a minister she has failed to declare her conflicts of interest.”

Mullighan said the inquiry’s finding that “ it was not just a perceived but an actual conflict… of course means she has clearly breached the ministerial code of conduct”.

“This does not meet the standards of this parliament – she must resign as minister,” he argued.

“Parliamentary convention and precedent dictates that she must resign.”

He cited former Liberal heavyweights John Olsen and Joan Hall, who stood aside amid conflict of interest scandals, and a former Deputy Premier Graham Ingerson who fell on his sword after parliament determined the House had been misled.

“This is the standard this parliament expects of ministers,” Mullighan said, also noting several current Government colleagues had stood aside amid questions over their use of parliamentary entitlements.

“That is the standard the member for Bragg fails to meet.”

Premier Steven Marshall hit back, calling Labor’s argument “bluff and bluster”, and arguing the fact they moved the confidence motion before the inquiry report was even tabled suggested it was a political witch-hunt.

He again argued that former Labor Minister Ian Hunter did not resign after losing confidence motions in the Upper House, saying: “I’m not going to be lectured on integrity by those opposite.”

He reiterated that his deputy “enjoys my 100 per cent confidence”, praising her “aptitude, capability [and] intelligence”.

The motion was debated after a long-awaited report by a parliamentary inquiry was tabled this morning, finding the Attorney-General had a conflict of interest, misled parliament and breached the ministerial code of conduct in relation to her decision to veto a $40 million timber port on her native Kangaroo Island, where she owns land.

The report, which was backed by three of the committee’s five members – Labor MPs Andrea Michaels and Tom Koutsantonis, and ex-Liberal independent Sam Duluk – with Liberals Matt Cowdrey and Peter Treloar voting against the recommendations.

Those two MPs released their own dissenting statement, taking issue with “the entirety of the Select Committee Report on the Conduct of The Attorney- General”.

“In our view, the Attorney-General complied with the Ministerial Code of Conduct in determining she did not have a conflict in this matter [and] accordingly… was not in breach of the Code in dealing with this application in the way she did,” they said.

“Nor did she mislead Parliament about the matter…

“Our view is that the Attorney maintained an open mind on the matter during the whole time she had responsibility for making the final decision.”

Marshall highlighted this dissenting report, saying: “This was not a unanimous decision of the select committee.”

He said the matter had now been referred to the Ombudsman for investigation, saying Wayne Lines was “the right person to be considering this” and calling for parliament to await that inquiry.

“There is no way whatsoever I will be going to Government House to ask for [Chapman’s] commission to be removed,” he insisted.

Malinauskas said parliament was on the “precipice”, saying: “How can Question Time serve its legitimate function within a parliamentary democracy, if the Opposition and crossbenchers can ask questions of the Government and they knowingly mislead the House, without consequence.”

“We are all human, we each have our failings [but] it’s become clear the Deputy Premier is suffering from the biggest dose of pride we have ever seen… rendering her incapable of seeing the forest for the trees, literally and metaphorically.”

Labor committee member Tom Koutsantonis told parliament a “secret” consultants’ report had been commissioned by the then-Department of Planning, Transport and Infrastructure, without the knowledge of KIPT, in a bid to find an alternative site for the port.

He argued that “every single piece of advice” to Chapman recommended the port should go ahead if it met key criteria.

“The reason the minister couldn’t delegate this to anyone else is because no independent advice said it couldn’t be approved – not one,” he said.

“She had a bias – she’s conflicted… and to cover that conflict, she misled us.

But Education Minister John Gardner said Koutsantonis had an “apprehended bias” of his own against Chapman, calling it “personal, nasty and deeply problematic” and the motion “frivolous, ridiculous, politically-motivated and nasty”.

Gardner dismissed the opinion of the QC advising the inquiry, Dr Rachael Gray, saying she “has not been elected by the people of SA to serve in this parliament”.

“In the Westminster tradition we have quite a different way of going about our business,” he said, arguing the committee was “an American-style investigation” designed “to bring down the Deputy Premier for the political gain of the Labor Party”.

Gardner submitted Chapman did not mislead parliament “either accidentally or knowingly”, saying her property at Gum Valley is adjacent to “privately owned forest that was always going to be logged at some point” – and did not realise that it had subsequently been contracted to KIPT.

He also dismissed her historical friendship with Kangaroo Island mayor Michael Pengilly – a former Liberal colleague of Chapman’s and a noted opponent of the port plan – saying: “There are very few people on KI that the deputy premier doesn’t know.”

As parliament prepared to debate the motion, Pengilly suggested on social media that Labor would pay a political price in its ultra-marginal Mawson electorate for the gambit.

“Intense anger being directed against SA Labor in Kingscote right now,” he tweeted.

“People disgusted with the gutless attack on [Vickie Chapman].”